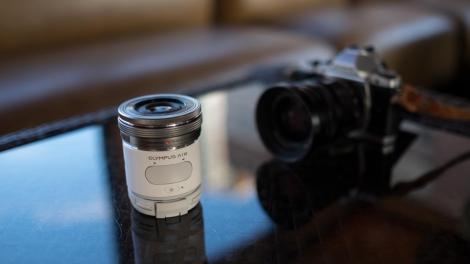 The interchangeable-lens camera has been an ever shrinking device from full-frame monsters, APS-C sensors to the miniature Micro Four Thirds (MFT) system cameras. Now, Olympus is introducing its smallest camera yet: the Olympus Air A01.

The new pocket shooter is a lens camera much in the same spirit as the Sony QX1 ($399, £250, about AU$520) in that they both rely almost entirely on a smartphone to operate.

It comes outfitted with a 16 megapixel, MFT sensor and a lens mount that will work readily with both Olympus and Panasonic glass. As for the camera screen, you’ll have to supply that on your own with an iOS or Android smartphone.

On top of using your phone to see your photos, an accompanying OA.Central app will turn your smartphone into a central hub for everything from composing your shot to editing and ultimately sharing images.

If you’ve seen Olympus’s earlier Open Platform camera, then the Air should look somewhat familiar. Since the camera company initially announced its plans to build a new camera platform, the Air has seen some significant refinements. For starters, rather than looking like an oversized and boxy GoPro, the new Air is a perfect cylinder.

What’s more, while the Sony lens camera has weird outcrops protruding from its cylindrical body, the Air is perfectly smooth on all sides. The Air is also a fair bit lighter, weighing in at only 147g compared to the 216g QX1.

Externally, there aren’t many controls on the Olympus Air. Up top, there’s a massive shutter button, which makes it easier to trigger the camera no matter how you’re holding it. Just below that, you’ll also find a small power button, and that’s really all there is for controls.

Instead of flicking dials and switches on the camera itself, you’ll spend the majority of your time in the Olympus Air smartphone app, tweaking exposure settings and setting up the shot. Thankfully, pairing a phone to the Air is a sinch through NFC or scanning the QR code printed on the device’s rear cover.

The Olympus Air comes with a mount for your smartphone to make it one whole, albeit makeshift, camera. Unlike the Sony QX1, the mount does not hold mobile devices flush with the back of the lens camera. Instead, the Air grips smartphones at an angle, making it easier to take photos from overhead or below eye level. Users can also rotate the smartphone mount unlike the Sony QX1.

A whole new world of possibilities

Despite the small size of the camera, the Air can take some truly gorgeous photos. Olympus has equipped its first lens camera with the same MFT sensor taken from the OM-D E-M10. The Air also inherits the E-M10’s 81 contrast autofocus points – the sensor detects different colors and levels of brightness automatically – and TruePic VII processing engine.

One thing that has been upgraded is the burst rate, which has been increased to 10 frames per second, thanks to the Air’s electronic shutter.

Compared to just about any smartphone camera, the Air resolves more detail, fuller colors, better shadows and general better dynamic range. That’s not to say you’ll be using this lens camera in a studio environment.

However, this camera will up your photography game with better food photos, landscapes, group selfies and just about any picture you would normally take with a smartphone. Don’t forget about the extra flexibility either. Because you can point the camera without having to look at the display, you can use the Air can take images from all sorts of new perspectives.

As an added layer of accessibility, the smartphone app comes with an OA genius preset, which takes a single photo you took and transforms it into six variants. Olympus explained that the app creates these six deviations by applying different settings, art filters and cropping images.

From there, you can select a shot that looks best or stick with their original file. Either way the Olympus Air app automatically creates these files. You can also choose your favorite OA Genius-created photos with stars, and the smartphone app will begin understanding your preference.

Of course, more experienced shooters are also free to go fully hands on and manually adjust every aspect of their exposure.

A tiny bit too small

Annoyingly, just about everything on the backside of the camera is obstructed by one layer of plastic or another. At the rear, there’s a switch to turn on and off Bluetooth as well as a microUSB connector for charging.

But to get to either, you’ll have to take off the smartphone mount. What’s more, there’s yet another rear cover that blocks access to the microSD card slot.

Additionally, to shrink the Air to such a small size, Olympus sacrificed a few qualities innate to its MFT camera line. Most importantly, the Air does not feature any form of sensor-shifting image stabilization whatsoever. Panasonic lenses with in-image stabilization of their own will work, though.

The Air is also entirely reliant on an electronic shutter (with a maximum 1/16,000th of a second shutter speed) to take photos. Without a mechanical shutter, there’s a greater chance images will develop rolling shutter, or the effect of a bent image, if you move the camera – or the subject in the frame is moving at a high speed.

Given the small stature of the Olympus Air, battery life isn’t great either. Olympus claims you should expect to get about 320 photos out of a full charge, which should be enough to last several hours of use, but no more than half a day. Luckily, the camera supports USB charging, so at least it can be charged on the go.

Priced at $299 (about £190, AU$390), the Olympus Air is just a bit less expensive than the Sony QX1. The Olympus Air will begin shipping stateside this July.

That makes the US the third territory to officially sell the Air, following Japan and Canada. Olympus has yet to announce plans to launch the Air in the UK and Australia.

A few years ago, lens cameras seemed like a strange fad, but with more and more Wi-Fi connected cameras cropping up, it’s beginning to make sense. Having a camera that you can use completely independent of your line of sight to a screen or viewfinder opens up a whole new world a photographic possibilities.

You’ll have to wait for my full review to see if it works as well in the real world. But for now, the Air shows a breath of promise.