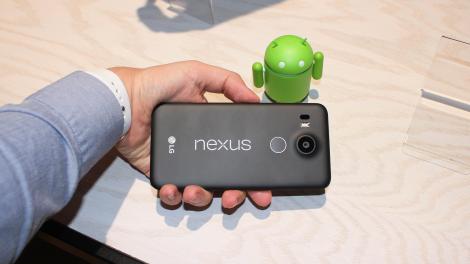 Google’s Nexus 5X literally gave me a hand, in that it’s a smaller one-hand-friendly Android phone, freeing up me from last year’s two handed clunker, the Nexus 6.

Its size is smaller, but the Nexus 5X specs are beefed up for the most part. It carries a faster processor, USB C port and far superior camera that Nexus phones have sorely lacked.

It delivers Android Marshmallow, the new update to Google’s mobile operating system. It’s the best way to get features like Google Now on Tap and the battery-saving Doze mode right away.

The Nexus 5X price is is $379/£339 for the 16GB version and $429/£449 for the 32GB model. At that price, spoiler alert, it’s not the most powerful Nexus device. That distinction belongs to the Huawei’s Google-commissioned Nexus 6P.

But for people without meaty paws who want a normal-sized phone at a smaller price, here’s what I experienced during my hands on time with the Nexus 5X.

The reason the phone is so light is because it’s backed by plastic, unlike the all-metal Nexus 6P. It comes in matte finish colors of white, black and greenish blue. Google refers to these shades as Quartz White, Charcoal Black and Ice Blue.

Standing out almost as much as the minty blue color is the fingerprint sensor on the back. This is Google’s imprint sensor, and it’s used for unlocking the phone, activating Android Pay and rivaling everything that Apple’s Touch ID and Apple Pay can do.

Unlike the iPhone’s biometric sensor that also acts as a home button, the Nexus 5X fingerprint sensor doesn’t get pressed down. I just curled my fingers around the phone as normal. Of course, it wasn’t set up for my fingerprint, so I was locked out. That works.

My Google demoer, however, was able to speedily unlock the Nexus 5X with a hitch, telling me that it bypasses the lockscreen in 600 milliseconds and learns for better accuracy over time.

On the bottom of the Nexus 5X design is another standout design feature: the USB Type C port. This makes the connection reversible, but it also renders all of your microUSB cables useless.

The trade-off to USB C might be worth it. Google says the Nexus 5X battery charges in half the time it takes an iPhone to rejuice and says just 10 minutes of charging restores four hours of battery life.

The Nexus 5X specs are solid, despite the fact that it’s the weaker phone when compared to the more powerful Nexus 6P. Right now, the differences can’t be seen without benchmarking tests.

However, the specs sheet begins to tell us everything we need to look for. LG took cues from its own LG G4, with the same Snapdragon 808 processor with a 64-bit 1.8GHz hexa-core CPU.

There’s a matching Adreno 418 GPU integrated into this chip, but just 2GB of RAM instead of the 3GB offered by the larger LG G4. One thing LG phone doesn’t have is Google’s Android Sensor Hub for activity monitoring that’s akin to the powers of Apple’s iPhone motion processor.

The Nexus 5X doesn’t offer a microSD slot. Instead, it relies on internal storage of either 16GB and 32GB, depending on how much you’re willing to pay. All versions of the phone run Google’s new Android Marshmallow operating system, so there’s no need to update.

Google proclaimed that the Nexus 5X (as well as the Nexus 6P) has the best camera it has ever put into a Nexus device. That’s not saying much, considering the average results of the Nexus 5 and Nexus 6.

However, loading up the default Google camera app, I found that the Nexus 5X camera may live up to the hype thanks to its 1.55 micron pixels. These are larger than normal pixels.

Although the camera is 12.3MP, a lower number than its top-performing Android rivals, the Nexus 5X is able to to capture extra light for superior low-light images. 80% of photos are taken in low light, according to Google, so this is going to be meaningful for all sorts of indoors situations.

The rear camera is not unlike the ultrapixels found in the HTC One M8. It combines these powers with a f/2.0 aperture, IR laser-assisted autofocus.

This camera records video in 4K at 30 frames per second, while the front-facing camera is 5MP with the normal 1.4 microns and the same f/2.0 aperture.

There’s more to come from this ongoing Nexus 5X review, since this is just day one of testing it out. The camera, a hallmark feature, is going to require more indoor and outdoor photo testing.

Right now, the benefits of the size, fingerprint sensor and Android Marshmallow can’t be denied. It won’t take an awful minute and a half to boot up like last year’s device.

I was able to adjust to the Nexus 6 and appreciate its larger AMOLED display, but I do find relief switching back to a smaller, lighter and cheaper phone. My pockets appreciate it more ways than one.