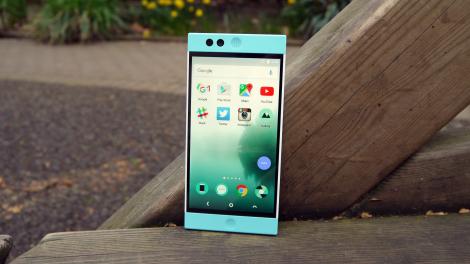 ‘Robin never runs out of space.’

Those are the words that greet you when you open the box of the Nextbit Robin, a phone imagined by the design guru behind many of HTC’s beautiful handsets.

It’s certainly a bold statement from a fledging smartphone manufacturer which is trying something different in an attempt to stand out with its first device.

The San Francisco based firm is harnessing the power of the cloud to ensure there’s always space on the Robin for the latest app, game, movie or music track.

Nextbit took to Kickstarter back in September 2015 to fund the initial drive for the Robin and it managed to raise $1.36 million – smashing its $500,000 target with 3,611 backers getting involved.

So can an attractive price tag, decent line up of specs and the promise of lots of space allow the Robin to rise up above the likes of the OnePlus 2 and Moto X Play, or is it going to experience some turbulence?

Nextbit says the ‘Robin doesn’t look like every other Android phone’, and it’s got a point. The mint-colored variant I got hands on with (there’s also a midnight blue/grey option) certainly has a different look and feel to most of the Android phones I fondle.

Two large chunks of colored polycarbonate site above and below the display, with both housing a central circular speaker. A 5MP front facing camera and sizable sensor window also sit in the top section.

From first glance it looks a little toyish. The mint color and blocky, angular design is likely to split opinion. I was unsure of the look when I first laid eyes on the Robin, but it grew on me slightly during my time using it.

Its flat edges and rear means it doesn’t fall as nicely into the palm as some of the more curvaceous offerings on the market, but at 150g it’s still manageable in one hand – even with is 5.2-inch full HD display.

Overall though, the Nextbit Robin doesn’t exactly ooze premium appeal – then again, would you expect it to at this price tag? – but considering the designer behind it is the same person who created the HTC One M7 and One M8, the Robin is a surprising contrast of materials and aesthetics.

There is a fingerprint scanner hidden under the side mounted power/lock key (in a similar way to the Sony Xperia Z5 range – to the point where I wonder if both brands use the same sensor), which is a nice touch, although I’m not convinced by the small, round volume keys on the left of the Robin. They’re not particularly easy to find, and the click feels cheap.

On the base of the Robin you’ll find a USB C port for easy charging, as long as you have your USB C cable to hand, and next to that a notification LED which will blink whenever there’s a new message, email or game update for you.

The little light is a handy addition, and there are another four on the back of the handset under the Nextbit logo which illuminate when it’s connected to the cloud and backing up your photos, videos and least-used applications.

The Nextbit Robin automatically backups to the cloud when it’s charging and connected to a Wi-Fi network, and when the 32GB of internal space gets close to full it will transfer photos and less used apps off the device and keep them in the cloud.

The crossover between the cloud and the phone is impressively seamless though, with apps that aren’t on the phone showing as slightly greyed-out, with a simple tap getting the app (and all its data) back onto the phone – and the phone will intelligently work out what should and shouldn’t be on the device for optimum space.

Your cloud storage is limited to 100GB though, which does raise the question how Nextbit can get away with saying the Robin will never run out of space. The majority of users won’t come close to filling the combined 132GB, but there will be a select few who push the system – and the claim – to its limits.

On screen you get Android 6.0 Marshmallow which has been lightly coated in Nextbit’s own theme.

This includes the removal of the Android app drawer, and the inclusion of a floating on-screen button with links to archived apps, pinned apps and a list of all your little programs both on the phone and in the cloud.

It’s still a relatively vanilla Android experience, but for those you love Google’s stock version the small tweaks by Nextbit could be irksome.

It’s not got the latest and greatest in terms of spec, and with 2016’s flagships just around the corner it could look rather outdated in a month or so – but the again, it also has a low price that should mean those specs match rather nicely even in half a year’s time.

Robin never runs out of space. It’s still written on the box, but it’s not actually true.

You get a 100GB of cloud space on top of the 32GB inside the Nextbit Robin, and while that’s a huge amount it’s not what the firm is claiming.

That’s not the main point though, as it’s the Robin’s reliance on the cloud itself which is interesting – giving us a glimpse of what the future’s likely to hold for all smartphones.

Cloud storage has been around for a while, but Nextbit’s implementation looks to be the best yet with useful auto backups and the intelligence to realise when internal storage is about to run out and working out from your usage which apps and photos can be shifted to the cloud.

The Nextbit Robin is unlikely to be anything more than a niche device, but it could be the start of something very big in the smartphone world – we’ve been waiting for cloud storage to become a viable and useful way of managing our smartphone life, and the Robin feels like a positive step towards that.