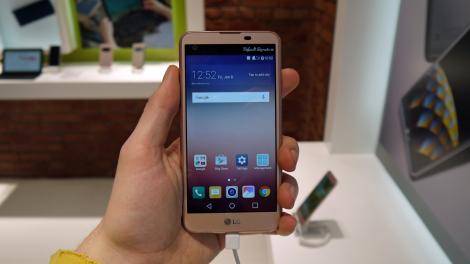 Why is the LG X Screen called the X Screen? It’s certainly not because of its rather middle-of-the-road 4.93-inch 720p display, it’s because it has a second screen – although a rather slender one.

LG has taken its second screen technology from the flagship LG V10 and transitioned it into a handset which will sport a much more attractive price tag. Just how much it will cost remains to be seen, but it will go on sale in certain markets during March.

Jumping straight to that second screen, what you’re looking at is a 1.76-inch display with a 520 x 80 resolution sitting to the top right of the main screen.

It’s a little odd, but the glass front means it blends nicely into the body rather than sticking out like a sore thumb.

This second screen is also always-on (although you can disable this in the settings), allowing you to see the time, date and notifications without having to power on the battery zapping main display. You can also choose to add a personalized message here if you want to give the X Screen a bit of identity.

It’s not just a clock display though, as when the handset is on you can swipe over the secondary screen to access quick settings and launch a selection of apps. Another useful feature is the fact notifications display here, so if you’re watching a movie or playing a game they won’t drop down in front of the action.

I particularly like that last feature, as Android notifications are now pretty huge and really get in the way of my Real Racing 3 addition.

While LG says the always-on display uses just 0.8% of battery every hour, over the course of the day the X Screen will lose a chunk of its juice to this. As I’ve mentioned, you can turn it off, but you’ll the have to fire up the main screen to check the time and your notifications.

It will be interesting to see how the 2,300mAh battery holds up, and whether the LG X Screen will be able to get through a full day on a single charge. It’s something we’ll put to the test in our full review.

The LG X Screen may be a mid-tier phone, but its design does give it a more premium look with a metallic frame providing a pleasing aesthetic. Pick it up though and it’s quite obviously plastic rather than metal, but it’s solid and the 142.6 x 71.8 x 7.1mm body nestles nicely in the palm.

There are fewer and fewer sub 5-inch phones on the market now, and while the X Screen comes in just below that mark, it was nice to hold a phone in one hand and not have to overstretch my thumb to get around the screen.

On the right you’ll find the power/lock key and a tray for a SIM card and microSD card, while the volume key lives on the opposite edge. The buttons are within easy reach, but they’re almost flush with the body which can make locating them a little tricky.

The LG X Screen packs in a quad-core processor and 2GB of RAM, which are in charge of keeping Android 6.0 Marshmallow ticking over. LG has added its own overlay to Android, which includes the removal of the app tray which may put the purists off.

The rest of the overlay though is pleasant, with a clean, fresh look which is closer to Google’s vision than LG’s previous attempts.

There’s also a couple of decent snappers on the LG X Screen with a 13MP camera on the back joined by an 8MP front facing option. The camera app is a relatively simple affair, with just a handful of controls and options.

The second screen is utilized here as well, with some of the camera options displaying there and thus keeping the viewfinder clear.

The LG X Screen is a solid little phone with a nice blend of design and specs and a splash of flagship technology in its secondary display.

For those looking for a more compact smartphone which can still take a decent picture and has enough power for day to day activities the X Screen is looking like a strong contender.