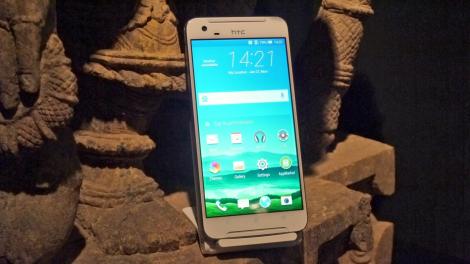 The HTC One X9 is a new phone that was, well, launched a few months ago. So it’s not new. But it is new because it’s now being shipped to more countries, and has some beefier specs than the very similar A9 which WAS launched… wait, let’s clear this up.

Last year, HTC launched the One A9. It looked a lot like an iPhone. A LOT. While it wasn’t a flagship device, it had some nifty features (like decent audio and stronger camera than the One M10) and was a lot slimmer.

Then word of the X9 leaked out, and it turned out this was designed for China and other Asian regions – and between that launch and now HTC must have shrugged and decided to offer it to other regions.

The HTC One X9 is a chunkier design than the One A9, but does come with the same full metal body, and dispenses with the iDentical antenna strips seen on Apple’s device.

It’s a little taller, thanks to packing in a 5.5-inch display, so when you pick it up you get a definite sense that this is a bigger phone in the hand. I know that sounds obvious, as it IS bigger, but some brands manage to get past this with a little bit of clever crafting.

The weight is 170g, and the 5.5-inch screen is 1080p, which seems OK (but not at the sharpest end of the spectrum). You’d argue this would be OK if the price was a little lower, and while there’s no official One X9 pricing out there, it’s unlikely to be cheap as it’s sold SIM-free into the retail channels.

One of the biggest upgrades to the mix here though is the Boomsound speaker set: by adding the speakers top and bottom and combining them with Dolby Audio for movie watching you’ll get a great experience for movie watching without the headphones.

The trailers on board didn’t really impress though, thanks to the screen being slightly on the uninspiring side – however, it’s nice to see the speakers added to the mix, and by pushing them to the edge of the phone the Android navigation buttons have been pushed back onto the phone (rather than popping up on the screen when you need them).

HTC’s new One X9 offers a lot of power, with 3GB of RAM and the Helio X10 Mediatek CPU at its electronic heart. It didn’t offer mind-blowing performance with general prodding, but it wasn’t terrible – I just noticed a little lack of snap.

Then again, this is early software and could well be corrected in the final version.

The same HTC interface seen on the One A9 (the Marshmallow, sleeker icon layout with less reliance on HTC’s own apps) is back again here, and it’s certainly one of the nicest to use out there if you’re a fan of marrying together useful elements within a finger swipe and clean lines.

Blinkfeed sits to the left of the homescreens, and while HTC’s not followed the same ‘stark’ notification shade as Samsung and LG by keeping an option with more customisation to play with.

The battery life of the HTC One X9 should be half-decent with a 3000mAh power pack pumping out the juice each day. HTC’s never been brilliant at battery management, but with the new Android 6 Marshmallow Doze Mode on offer it should be a little better than before.

The snapper is a 13MP affair, which takes some passable snaps in early looks. It doesn’t always work in the way you’d exactly expect, with colours looking average in my very quick tests.

However, the 13MP sensor on the One A9 was pretty good – probably the best HTC has pumped out – and it’s the same sensor here, so assuming HTC hasn’t found a way to screw it up the pictures in our full test should be a lot better.

With elements like optical image stabilisation in the mix, this should really help the snapping situation. There’s the same 5MP camera on the front for the selfie fun so many enjoy – beauty mode in the mix too to make you look like a slightly disturbed worm if you’re into that kind of thing.

The HTC One X9 is a nice looking phone, if a little chunky. It’s not going to be the big hitter from the brand at this conference, let’s be honest, nor will it pull up any trees in terms of sales.

However, it’s got all the features HTC loves to crow about (high res camera, Boomsound speakers, metal unibody design) and does tick all the boxes there. It’s dual SIM too, which will impress some.

Stay tuned for our full review – if we can get our hands on a review unit, that is…