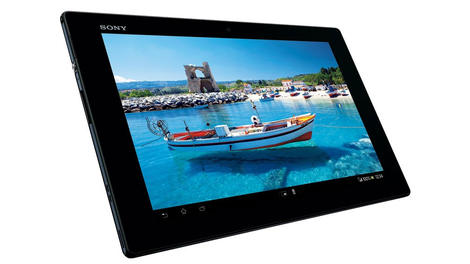 Sony is going all out with the bigger brother to the Xperia Z, offering a host of top end specs to convince iPad- and Nexus-lovers to look again.

That latter spec makes us enjoy the tablet all the more – showing up the likes of the Google Nexus 10, which admittedly has a higher resolution screen. That’s mitigated slightly by the fact the Sony Xperia Tablet Z offers its Bravia Engine 2 to add to that Reality Display – both combined give a really rich and colourful screen, without feeling over saturated. 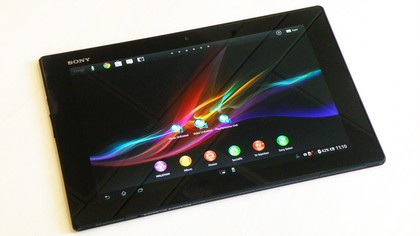 So – the competition at the 10.1-inch space is fierce (give or take an inch, of course), can the Xperia Tablet Z really stack up? Sony isn’t known for making the greatest Android tablets, but the Z really shows a step forward.

When first viewed, you’d be forgiven for thinking the design team behind it was simply incredibly lazy; this tablet looks like a stretched version of the (admittedly excellent) Sony Xperia Z. 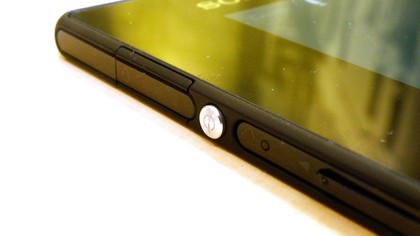 But as soon as you pick it up you realise that while it is part of the same family, it’s a completely different beast. Light at 495g and super slim at sub-7mm, it’s a very comfortable tablet to hold for an extended period of time.

Well, apart from the sharper edges, that is. We applaud Sony for offering a universal design language through its new devices, but we’re not fans of the angular edges either on the phone or tablet version of the Xperia Tablet Z.

That aside, there’s very little else we can criticise this tablet for though. It’s got pretty much everything you could want on an Android tablet these days, starting with a pretty up to date version of the OS (Android 4.1.2) and a Qualcomm Snapdragon S4 Pro quad core chip, clocked at 1.5GHz. 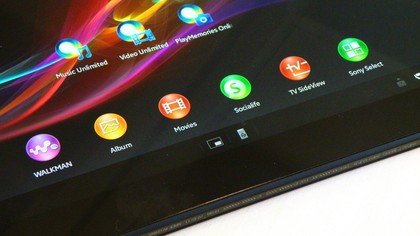 Combined with the Adreno 320 GPU, the graphical processing (and general use) of the Sony Xperia Tablet Z is excellent. It’s nothing ground breaking, but it’s certainly no slouch and more than enough to impress.

Something we do find strange though is Sony’s insistence that the Xperia Tablet Z and the Xperia Z are two devices that could live harmoniously together in a gadget fan’s house.

While both great pieces of kit, there’s not need for both, as you can really see that Sony has focused on taking the core of its latest smartphone and extending that up to a much higher resolution screen (1280 x 1900) and adding in a few extras. 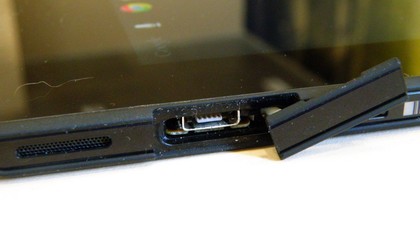 Like the smartphone, the Xperia Tablet Z is water- and dust-proof, rated to IP57. While this isn’t going to be much of a problem day to day, the ability to do things like use the device when in the kitchen is an excellent move – which budding chef hasn’t accidentally covered an iPad in egg yolk when watching the Great British Bakeoff?

The Xperia Tablet Z does have some of its own tricks though, such as being able to watch the TV as a Side View – this means if you’ve got a compatible TV (Sony is claiming that only its own models will work with this feature, but there’s a good chance many Smart TVs will be able to jump on board) you can control the channel you’re watching, change to an internet channel or stream YouTube video trailers of your favourite shows directly from the device. 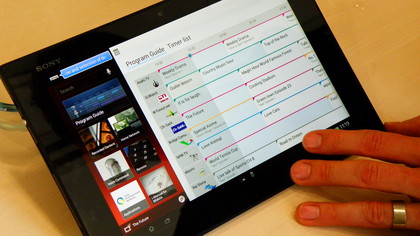 We’ve seen something similar on the new HTC One, but provided you’ve got a compatible smart network set up, this is so much more impressive – plus it too has the IR blaster to turn the Xperia Tablet Z into a universal remote control too.

Media is certainly a strong point for the tablet – everything from a customisable EQ (which actually worked very well in our testing) to the four speakers designed to create virtual surround sound, we were impressed with the device in our early look.

While some tablets definitely struggle to stand alone as a media device, requiring a decent pair of headphones, the Xperia Tablet Z is definitely the right kind of thing for an hour or two in a lonely hotel room on a business trip. 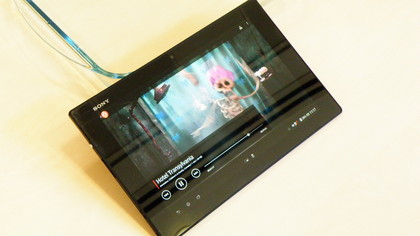 Other audio enhancements, such as xLoud or S-Force surround might help fill out the spec sheet, but while offering a notable difference aren’t going to be deal breakers for most.

We couldn’t test the full raw speed of the Xperia Tablet Z when it comes to internet browsing, as we were forced to watch as a slow Wi-Fi signal chugged along, but if it’s anything like the smartphone you can look forward to strong Wi-Fi performance and even more impressive 4G speeds on top of that. 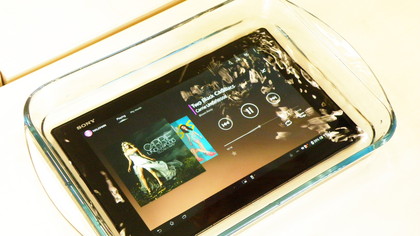 If you’re one of those people that think it’s perfectly acceptable to take pictures with a device rocking a 10-inch screen (you know who you are, and shame on you – buy a camera) Sony has you covered, thanks to a frankly over the top 8MP camera on the back of the Tablet Z and a 2MP one on the front. 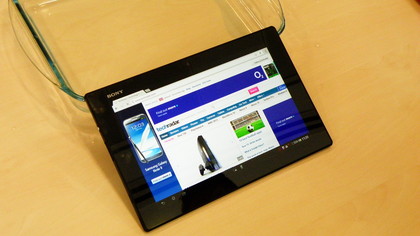 The latter spec makes a lot more sense given you’ll be spending a lot of time video calling on this display, but even the presence of the clever Superior Auto mode, borrowed from the Xperia Z, doesn’t make the rear camera compelling.

Sony is also making a big deal of the fact the tablet is NFC enabled, and is hoping this will be a compelling reason to get your house properly integrated with the tippy-tappy-technology.

From future Bravia TVs to speakers to special NFC tags, the Xperia Tablet Z loves to change its ways depending on what you thrust it towards. 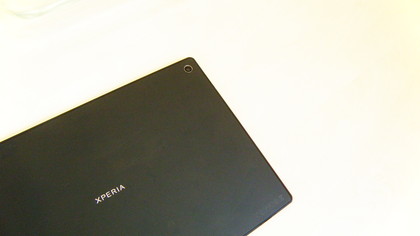 The sensor is located at the bottom of the tablet, which means it can be a little tricky to actually tap when you need to, but when it works sound or pictures instantly transferred to the device on offer during our tests.

There’s a good case to be made for having a smartphone and tablet in your possession these days, provided you have the funds.

But given the Xperia Tablet Z and Xperia Z can do the same thing, and the phone also has a Full HD screen (at half the diagonal width, admittedly) we can’t recommend owning both, given that will cost you nearly £1000. 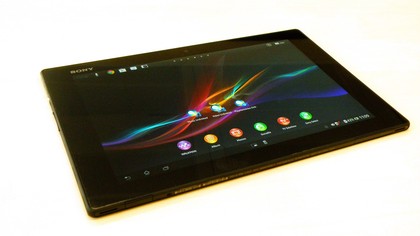 However, if you’re someone that doesn’t want to own a top end smartphone but loves the idea of having a family device that can be shared among kids and adults alike (don’t forget, different accounts are available on today’s newer Android tablets) then this is definitely one to check out.

We’re feverishly awaiting the chance to get our hands on the Sony Xperia Tablet Z for full review, and if the battery life can hold up (Stamina mode is offered, as in the phone, to help extend the life of the device by switching it to a mostly-unconnected mode when the screen is off, which should help mitigate the fact it’s only 66% as large as that found in the Nexus 10) then we could have a new favourite tablet on our hands.