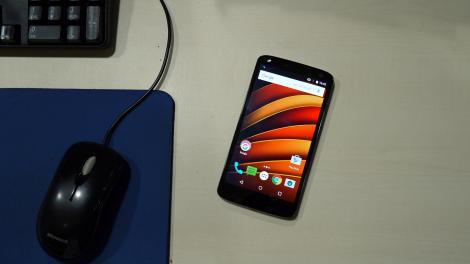 The Motorola Moto X Force is the firm’s new flagship smartphone, coming in above the Moto X Play and Moto X Style, and boasting a smashproof screen.

Yes, you’ve read that right, Motorola reckons you can’t break the display on the Moto X Force (through accidental drops, not you actually trying), but more on that shortly.

In the US it’s known as the Moto Droid Turbo 2, available exclusively on the Verizon network.

That’s the going rate for flagship phones these days, but considering it’s launching around six months later than the likes of the Samsung Galaxy S6, HTC One M9, LG G4 it’s actually more expensive as its rivals have witnessed some rather healthy price cuts.

Can the Moto X Force apply enough pressure on the competition to make its mark, or will it buckle under the weight of the already established flagship incumbents? I’ve been hands on to find out.

When it comes to design the Moto X Force is in essence just a smaller X Style with a metal frame, rounded corners, slightly curved rear and customisable back plates.

The model I got my hands on had a textured black plastic rear, but Motorola will be offering a range of resins, wood and leather coverings for the X Force – all at no extra cost via its Moto Maker website.

It sports a smaller screen than the Style, with the 5.4-inch display allowing the X Force to be a little more palm friendly. It’s still on the larger side, but at 149.8 x 78 x 9.2mm it’s less dominating and the 169g weight is easier to handle.

The main attraction here though is the 5.4-inch QHD display, which sports a five layer construction allowing Motorola to brand it the “world’s first shatterproof smartphone display” thanks to its Moto ShatterShield technology.

The base layer is an aluminium core which keeps the other layers together and stable. Next up is the flexible AMOLED display, which gives the screen greater durability, and that’s followed by a dual touch layer. Motorola’s added a second touch layer here to provide a backup if the first one fails for any reason.

The fourth layer is the interior glass, similar to what you’ll find on most phones, and that’s then covered by a factory fitted exterior layer. It’s essentially a screen protector to protect against scratches, and it can be manually removed and replaced with a fresh layer if it starts to get worn.

All this protection has made Motorola feel pretty confident, and it’s guaranteeing the screen for four years. That means if you accidentally smash the screen of the Moto X Force it’ll be replaced for free.

I dropped the handset down a flight of stairs during my hands on time and it survived without a scratch.

The screen, like on the X Style, looks great on the Moto X Force, producing bright, vibrant colours which are pleasing to eye.

For the more discerning smartphone user though that exterior layer on the screen is noticeable, with an obvious ridge round the front facing speaker grills below the display and the earpiece above it.

Most users probably won’t notice it, but I spotted it almost immediately and it does detract a little from the overall look.

On screen you’ll find Android 5.1.1 Lollipop running the show. Motorola promises an upgrade to Android Marshmallow will arrive “soon”, but it was unable to confirm to me whether that means before Christmas or not.

It runs smoothly thanks to the Snapdragon 810 processor and 3GB of RAM Motorola has stuffed inside the X Force, and I was able to skip around the interface and open and close apps with ease.

As well as the option to have either 32GB or 64GB of internal storage, you can expand on this by up to 2TB with a microSD card – which is great news for those with vast music or movie libraries.

Motorola is claiming the Moto X Force will last for two days on a single charge thanks to the sizable 3,740mAh battery it’s managed to stuff inside the device.

That’s bigger than the power pack in the X Style, and with a smaller screen and more power efficient processor I’m hoping to get at least a full day out of the X Force.

If you do find yourself running low the X Force supports both wireless charging standards, while its quick charge functionality will see 13 hours of usage returned after just 15 minutes of plugged in time.

The Moto X Force comes equipped with the same 21MP rear and 5MP front cameras as the X Style. There’s a front facing flash too, perfect for lighting up your nightclub selfies, while a two-tone flash resides on the metal strip round the back.

After a quick play with the camera I found shutter speed to be responsive and image quality more than acceptable, but look out for the full review to see just how well it performs.

Motorola could be in danger of confusing its own flagship offering with three “X” devices, but there’s no questioning the Moto X Force is the best of the bunch.

If its battery can live up to expectations, and the tough screen tech holds true, Motorola looks set to be onto something quite special with the Moto X Force.

Hopefully the price won’t put too many people off, but a cheeky price cut early next year could help make it a real hit.