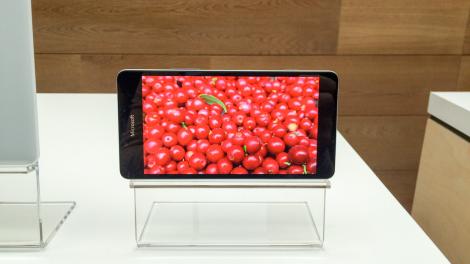 But those days could be over, as its flagship Lumia 950 challenges some of the strongest phones around with some powerful hardware and compelling features. This is the posterchild for Windows 10 Mobile, and it already does a stellar job of showcasing the operating system (OS).

The Lumia 950 uses every end of the updated mobile OS to great effect – at least at first glance. There’s Cortana integration throughout, Office support, Windows Hello iris-based security and the option to use the phone as a PC through the Continuum feature, to start.

But before I get into all of that, let’s take a closer look at the phone itself.

Pretty in plastic with plenty of pixels

What you’ll notice first about the Lumia 950 is that, like all the others before it, it’s clad in a matte white or black polycarbonate shell. For a phone that starts at $549 (£450, about AU$766) unlocked, it’s not exactly the most premium casing.

But hey, that didn’t stop Samsung’s phones from selling like hotcakes before they went all glass and aluminum.

Measuring 8.25mm thin and weighing 150g, this certainly isn’t the slimmest phone around, far outclassed by the iPhone 6S and Samsung Galaxy S6. If you’re looking for a supreme sense of chic from your smartphone, look elsewhere.

That said, the plastic shell does feel quite substantial, and it’s curves only help keep grip of the thing when using it one-handed or take photos. I’d feel much more comfortable using this phone one-handed – without a case – on the subway than, say, an iPhone.

The phone’s right edge is lined with your standard run of volume rocker, lock button and camera shutter button from top to bottom, with its other edges devoid of buttons. Other than that, the phone’s USB-C port is found on the bottom – surprise.

The casing wraps around the phone’s 5.2-inch, 2,560 x 1,440 AMOLED display underneath a sheet of Corning Gorilla Glass 3. That resolution amounts to 564 pixels per inch (ppi), essentially matching the 5.1-inch Galaxy S6 and simply crushing either new iPhone. (Though, that last feat isn’t a particularly tough one.)

It’s an incredibly sharp screen, one that can actually depict the detail within the 20-megapixel (MP) photos that the phone can take. There’s no doubt that this will be a fine phone for movie watching and game playing on those boring commutes.

Speaking of the camera…

The Lumia 950 sports a 20MP PureView shooter with a triple LED flash, optical image stabilization and Zeiss optics in the rear. Not only is this camera capable of shooting 4K video, but Microsoft’s (originally Nokia’s) Living Images.

Around since before Apple’s Live Photos were cool, what this does is has the camera record one second of video before firing the shutter. The result is an image that comes to life just before entering a still state, a neat trick that’s a little more versatile than Live Photos.

For instance, if someone you know owns a phone that doesn’t support Live Images, you can choose to send that file as an .mp4 video file. Otherwise, it’s simply sent as a slightly larger .jpg than normal – about 20%, I’m told.

Another cool feature about the Lumia 950 camera is that, when shooting subjects in motion, the sensor can pinpoint exactly with pixels to focus on to avoid blur. A demonstration of the phone shooting a card trick expert fanning a deck put this into perspective for me. Oddly enough, Microsoft may have one of the few phones ideal for sports photography.

The 5MP snapper in the front features a wide-angle lens, so you can get more buddies into those selfie shots, as well as 1080p video capture capability.

While it likely won’t matter one bit in your daily use of the Lumia 950, take comfort in knowing it packs one of the latest Qualcomm processors: the 64-bit, hexa-core Snapdragon 808. Remember when Panos name-dropped “liquid cooling” in presenting the new Lumia phones? That feature isn’t here simply because it isn’t needed. (But don’t tell that to the heatmiser Snapdragon 810.)

The phone comes with 32GB of onboard storage, which can be bolstered by as much as 200GB of expandable storage through a microSD card. The rumors were that this phone comes equipped with 3GB of RAM, but that has yet to be confirmed.

On the connectivity front, the Lumia 950 is houses not one, but two antennas inside – one near each of the bottom corners. When speaking with a Microsoft representative, it became clear that this is purely designed to offer the best signal for both righties and lefties, depending on which is holding the phone. Rounding out that package are LTE support, 802.11ac Wi-Fi and Bluetooth 4.1.

Powering all of this is a 3,000mAh battery that Microsoft claims can last for up to 9 hours and 30 minutes of Wi-Fi web browsing, 18 hours of talk over 3G and 10 hours of 1080p video playback. Now, that’s a phone that can last all day – at least on paper.

However, I was told to expect this to change in the coming weeks as more carriers come out in support of the new phone. Perhaps, by the time our full review publishes, that exclusivity will change.

Microsoft’s re-entry into the smartphone market is an incredibly focused one, concerned more with how its customers use these phones than whether they’re ready for the phone fashion show.

And frankly, the Lumia 950’s feature set speaks far louder for why you should buy one than if it were clad in an anodized aluminum shell. The screen is super sharp and vibrant, the camera looks to be one of the better phone snappers in 2015 and it’s got gobs of storage.

Features like Windows Hello – its IR-powered, iris scanning technology used to unlock the phone – help set Microsoft apart from the herd. Meanwhile, Continuum allows the Lumia 950 to do what no other can: power a pure PC experience from just one (albeit powerful) USB-C port.

Will the Lumia 950 singlehandedly save Microsoft from obscurity in the phone space? That’s unlikely. But this isn’t just the Redmond Campus putting its best foot forward, it’s Microsoft laying out the blueprint for its partners to follow. And that is possibly more important than the Lumia 950 itself.