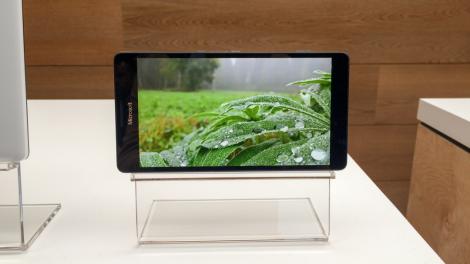 Being laser focused on productivity, Microsoft is perhaps in a better position than any of its rivals in the phone space when it comes the dreaded word: phablets. The $649 (about £422, AU$893) Lumia 950 XL has been touted as the ultimate phone for getting things done, but that boils down more to Windows 10 Mobile than the phone’s size.

Of course, the phone’s dimensions certainly help. At 5.7 inches on the diagonal, this is definitely a two-hander handset for anyone that isn’t The Mountain-sized or has unnaturally large mitts.

Thankfully, Microsoft has made ample use of the enlarged screen size, using the extra room inside for some power-packed hardware, one way to ensure you get the most out of it and a neat method for keeping it all from burning up.

Save for a slightly different rear camera housing, the Lumia 950 XL looks nigh identical to its smaller sibling, the Lumia 950. The same matte white or black, polycarbonate (i.e. fancy plastic) shell is still here, along with the same array of volume, lock and camera shutter buttons along the right edge of the device. The bottom edge houses the same USB-C port as the 950.

Of course, Microsoft employs the same AMOLED technology here underneath a sheet of Corning Gorilla Glass 4. While I don’t have the best eyes, it was impossible for me to discern any pixels from a normal distance. Plus, thanks to the choice of panel tech, the screen was saturated with deep reds and blacks, but not overtly so.

While I don’t mind the plastic body, especially since it disappears behind that gorgeous display, it’s certainly not as luxury as it could be when you consider the flagship-level pricing. I’d even take the brushed magnesium of the Surface line of tablets (and now laptops).

However, like I said of the Lumia 950, it’s not as if Samsung couldn’t sell its Galaxy phones back when they were all-plastic. In short, the casing is by no means a deal breaker. It feels easier to grip, which is crucial for such a big phone, and Microsoft did everything it could to make plastic look premium.

Microsoft knows how to make a smartphone camera

Thanks in large part to Nokia, Microsoft has learned to craft a smartphone camera that can rival the cream of the crop. For all intents and purposes, the cameras within the 950 XL are identical to that of the 950.

You’ve got the PureView 20-megapixel (MP) shooter in the rear with the triple LED flash, optical image stabilization and 4K video recording capability with Zeiss optics. Up front is the same 5MP, wide-angle selfie snapper with 1080p video recording.

But what good are phone cameras these days without unique features? Pioneered by Nokia and passed off to Microsoft in the recent reshuffling, Living Images are, well, alive and well in the new Lumia phones.

This feature has the camera record one second of video before firing the shutter. The result is an image that comes to life just before entering a still state, a neat trick that’s a little more versatile than Apple’s newfangled Live Photos.

For instance, if someone you know owns a phone that doesn’t support Live Images, you can choose to send those .mp4 video files. Otherwise, it’s simply sent as a slightly larger .jpg than normal – about 20%, a Microsoft representative tells me.

The new Lumia cameras may also make for more ideal sports photography than most phones can provide. This is because, when shooting subjects in motion, the 20MP sensor can pinpoint exactly which pixels to focus on to avoid blur. A demonstration of the phone shooting a card trick expert fanning a deck put this into perspective for me.

Believe it or not, but the Lumia 950 XL isn’t vastly more powerful than its smaller counterpart, the 950. Sure, the phone comes packing Qualcomm’s currently-leading, octa-core Snapdragon 810 processor, but don’t expect twice the graphics or multitasking performance out of this chip versus the 950’s hexa-core Snapdragon 808, if recent tests are to be believed.

Regardless, the 950 XL is about as punchy as smartphones get in 2015, and Microsoft has made extra efforts to ensure the phone can push the 64-bit silicon to its limits: liquid cooling. That’s right: Redmond has adapted the liquid cooling tech employed in its Surface tablets to its second in-house developed phablet.

The extra cooling should help the 950 XL edge ahead of the 950 when it comes to multitasking through Microsoft’s Continuum feature. Not to mention it should shore up any gaps in power when reaching maximum heat like the chipset has suffered on other phones, like we saw in the LG G Flex 2.

Rounding out the spec sheet is a 32GB onboard storage drive, expandable by as much as 2TB (whenever the tech arrives) via microSD card, two LTE antennas like in its smaller counterpart, 802.11ac Wi-Fi and Bluetooth 4.1. It’s rumored that the phone houses 3GB of RAM, but that has yet to be confirmed. Either way, this is one fast phone, one that will likely last at least two generations without getting too far outclassed or bogged down.

Powering all of this is a removable, 3,340mAh battery that Microsoft claims can last for 75 hours of 3G talk, 25 hours of Wi-Fi browsing and 11 hours of 1080p video playback. If you wanted a Windows phone to last you all day and then some, this is the one to get.

As far as we know, the Lumia 950 XL is currently exclusive to AT&T in the US in the lead up to its November release. However, I’m told that this will not be the case for long as Microsoft finishes working with carriers to get this thing to market.

It would be safe to expect announcements from more carriers adopting the phone within the next few weeks, I’m told. (We’ve not yet heard word on UK and AU availability or pricing.)

If you couldn’t tell, I’m not exactly a fan of phones of this size. But, because that’s simply personal preference, I won’t hold it against the Lumia 950 XL.

This is looking to be an incredibly strong comeback attempt by Microsoft that I only hope doesn’t get ignored for its need to catch up with iOS and Android in the apps space. Just like the Lumia 950, the 950 XL was designed to sell its unique feature set, not on account of a flashy appearance.

For instance, Microsoft’s iris-scanning Windows Hello technology seems to work like a charm and is incredibly easy to set up. Meanwhile, the phone’s ability to drive PC-like use of apps like Office could help attract the BYOD (Bring Your Own Device) crowd in the work world.

Like I said in regard to the Lumia 950, the 950 XL isn’t likely to turn Microsoft’s fortune in the phone space singlehandedly. But what’s perhaps more important is how the phone should show Microsoft’s partners how to make a Windows 10 Mobile phone. But should you jump into this larger of the two Lumia’s? We’ll leave that call to our full review.