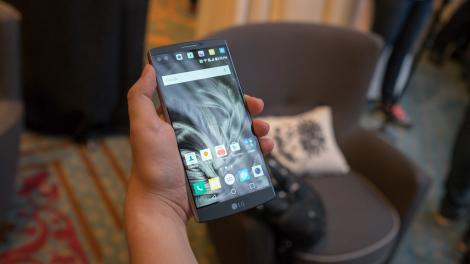 I’m convinced Dr. Ram-chan Woo and his LG design team are really mad scientists determined to bend and shape unique smartphones. The LG V10 is their latest Frankensteinian creation, launching in South Korea on October 8 and worldwide later this year.

This Android phone would then be a two-headed monster, in their effort to radically disrupt traditional phone features, due to its second screen and dual front camera.

The LG V10 takes a lot of cues from the flagship LG G4, but but the look and feel of this device is completely different. It’s bigger, more rugged and has a little bit of extra power.

My time with this Android Lollipop 5.1.1 phone was further proof that, while LG isn’t bending its latest phone, like it did with the LG G Flex 2, it’s still determined to try bold, new ideas, while Samsung and Apple play it safe.

LG V10 is more durable, with an interesting mix of stainless steel sides and a silicone skin back. Its bumpy texture and rubbery feel really contrast with the smooth leather back of the LG G4.

The benefit to this new concoction is that it can survive drop tests like no other phone, according to LG. It’s built to military-grade standard, and almost as if that case you’re going to (or really should) buy anyway is built in. Adding to that is a much appreciated double-paned Gorilla Glass 4 for extra protection around front.

Though the LG G4 was a bit thicker at its curved apex, everything else about this new phone is bigger, with the clear intention that it’s to rival the iPhone 6S Plus and Samsung Galaxy Note 5.

While Apple and Samsung are trending toward aluminum and glass designs, LG is going with a more practical finish, emphasizing durability, a microSD card slot and a swappable battery.

It could sell a lot of phones based on that microSD card slot and removable battery, now that Samsung has phased out these features on the Galaxy S6 and Note 5.

LG V10 comes in Space Black, Luxe White, Modern Beige, Ocean Blue and Opal Blue. I got to test the Space Black with silver highlights, and scope out the Luxe White with a gold finish during a brief preview.

The real eye-catching feature here is the second screen on the front. It’s not at all like the rear, e-ink second screen of the YotaPhone 2, though it has the same battery life-saving goal.

Then, and here’s where the LG V10 becomes a true Frankenstein-like marvel, it tacks on a 2.1-inch display at the very top, taking the display size to 5.9 inches, in effect.

It all looks like one seamless display, even though the 160 x 1,040 and 513ppi strip at the top has a separate backlight component to it. Get ready to stretch those fingers a bit further.

The extra reach is worth it for faster navigation. The second screen serves as a quick way to glance at the time, weather and notifications, or switch out to my favorite apps for contacts. Both Apple’s iOS 9 and Samsung’s Galaxy S6 Edge+ do this, too, but with hidden, harder-to-reach menus.

The LG V10’s nearly always-on top display shines information and settings widgets, even when the main screen is off. Don’t worry, it can be turned off like a smartwatch, which I realized upon palming the front of the device.

Multitasking is a bit easier, with my most recent apps always present on the top, and incoming calls, text notifications and calendar appointments won’t take up any of the room of the main display to annoyingly interrupt what I’m doing.

I really hate staring at Google Maps directions, only to have the street name I want to turn on covered up my a text message. I have to wait for the message to pass or dangerously swipe it away while driving. LG V10’s second screen artfully gets around this problem.

There’s no other phone out there with a dedicated display like this, so the LG V10 is in a class of its own. It adds to the normal, quad HD display I’m used to seeing, yet remains practical.

LG V10, going with my two-headed monster phone theme, has two eyes on front, whereas all other Android phones out there have just one. The horror!

The 5-megapixel (MP) dual front camera let me play with two separate lenses that shot at the normal 80 degrees and a much wider 120 degrees. All of a sudden, group selfies were a bit easier to take.

The idea behind the dual front camera is to wisely eliminate the need for a selfie stick, according to Dr. Woo. It’s also a direct shot at the “wide selfie” camera mode used by Samsung phones.

I really appreciate Samsung’s wide selfie mode, but LG is right: panning and tilting the phone to get everyone into the picture often blurs people on the edges. This is a much cleaner solution.

Wider selfies at 120 degrees is wholly practical. Everyone’s in the group shot and no one one’s face is cut off – unless you know more than three or four people.

Capturing backgrounds is as much as the more obvious perk of getting everyone into a group shot. I didn’t realize this at my closed-door hands on time, but did get a good example at LG’s presentation.

The LG V10 employs optical image stabilization to further reduce camera shake, as well as the same top-of-the-line 16MP camera as the LG G4. Yes, it took me this long to mention the main, rear camera, because the 5MP shooter is turning into the real star. Times have changed.

Less practical are some of the modes that come along with the new camera. LG decided to add an odd multi-view recording mode to the LG V10, which stitches together the normal selfie, the wider selfie and the rear camera. I don’t understand the purpose of capturing these three different angles at once and probably never will.

More useful are some of the modes for recording 4K videos. While LG got a lot right with the 16MP camera on the LG G4, it admits that it didn’t go far enough with video.

With that said, the LG V10 becomes the first smartphone to add manual mode for video, sort of like the LG G4 opened up manual settings for still photos earlier this year.

I was able to change the shutter speed, frame rate, ISO, white balance and focus while recording when shooting in HD. There’s also full HD (1080p) and Ultra HD (2160p) modes and two aspects ratios: the standard 16:9 and more cinematic 21:9.

There should be less shake here too, thanks to LG’s electronic image stabilization meant for steady recording. After all, the LG V10 is a mobile phone not often attached to a tripod.

Pro video recorders, who want to pretend to be cutting-edge, roaming director, will appreciate the built-in audio monitor and wind noise filter settings. They can and will still shout “quiet on the set,” regardless.

Everyone else can rely on the software to piece together their video. Snap Video mode creates one video by combining short clips of many captures.

15 sec. Auto Edit mode outputs a highlight package by detecting motion, This eliminates accidentally blurred and static scenes, all without the help of a production team. Don’t worry, pros, there’s a quick video editor here too, to trim and fix everything in post.

LG V10 features twice as many screens and twice as many front-facing cameras as every other Android phone, but it’s not the only reason to consider buying into the new concept.

There’s a specs upgrade beneath the two displays, even though a lot of the chips take their cues from the LG G4. It’s a little more powerful and offers twice as much more internal space.

The V10 is powered by the same Qualcomm Snapdragon 808 hexa-core processor, which is made up of a 1.44GHz quad-core chip, a 1.82 GHz dual-core chip and embedded Adreno 418 GPU.

This is the also the very same chip found in the Nexus 5X. LG once again avoided the Snapdragon 810 processor, even though v1.2 is in the Nexus 6P. The LG G Flex 2, with the first version of the troubled CPU, became hot and slow in our tests when under pressure.

The real upgrade to the LG V10 specs sheet is in the memory. It features 4GB of RAM instead of the 3GB found in the LG G4. That’s enough to compete with Samsung’s Note 5 phablet.

There’s also one and only option for internal storage, and you’re going to like it: 64GB. Android phones this year typically start at 32GB, and Apple’s, somehow, still enter the race with 16GB.

Not enough space? LG is sticking with the microSD card slot, so that expandable storage can add an extra 2TB of files. 4K video always takes up a lot of space, so this is an important feature for a lot of people.

Rest assured, the company promised that its team in South Korea is already working with the new operating system update, and it hopes to have it running with all the standard LG UX 4.0 apps soon.

The LG V10 has the same 3,000mAh battery as the LG G4, and yes, it’s once again removable, as I was able to test out when peeling away the phone’s back cover.

Battery life should get an extra boost if you’re not lighting up that quad HD display all of the time time, in favor of peeking at the always-on second display.

LG says that its measurements indicate the second display only drains 5% of battery life if left on all day long. It shouldn’t be that way, either, as it turns off whenever it’s slipped into your pocket or backpack.

Like every good Qualcomm-powered phone, the LG V10 takes advantage of QuickCharge 2.0 for faster charging. It also employs wireless Qi charging, unlike the Nexus 5X and Nexus 6P.

How long does the V10’s battery last in real-world situations? It’s going to depend on how LG’s phone handles background tests and how much we actually use that second screen to its full potential.

The LG V10 is one of Frankenstein’s monsters that the greater mob may not understand. Its second screen and dual front camera setup are unheard of at this point.

That may always be the case, actually, as this Android phone seems like another experiment by the ambitious LG phones team. But I take heart in knowing that they’re trying new approaches.

The phone does make sense for quicker navigation and wider group selfies. Moreover, I also appreciate the faster specs and pro-level 4K video recording. The harder-to-break design is nice too, though I miss LG G4’s leather back that eliminated the need for a premium case.

At 5.7 inches, with a second screen that brings it to 5.9 inches, this is a phablet that competes with the iPhone 6S Plus and Samsung Galaxy Note 5. Its price, still undetermined but more expensive than the LG G4, is going to be a big factor for many people.

For others, the fact that the V10 has a microSD card and removable battery are going to be enough to warrant a purchase. Burned Note 5 fans are waiting patiently.

In the US, you can expect to see the LG V10 in AT&T, Verizon and T-Mobile stores later this autumn.