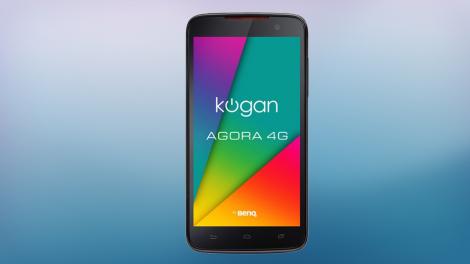 Kogan’s smartphones have come a long way since its first Agora prototype. While that first handset was more old-school Blackberry than shiny Nexus-rival, Kogan’s latest handset, the Agora 4G, brings a level of sophistication and elegance that doesn’t seem to gel with the $229 price tag.

This particular model, the third official release to come from the Australian tech company, shares its branding with BenQ, a company better known for monitors and projectors than smartphones in Australia.

The association has definitely helped Kogan here. The hardware itself is both nice to look at and comfortable to hold. If it weren’t for the Kogan branding on the back of the device, anyone looking at the phone would have a hard time believing that the phone only costs $229.

The 5-inch screen means the Agora 4G is competing against the likes of the Nexus 5, Galaxy S5 and HTC One M8, yet for a far cheaper price.

From a technical standpoint, the Agora 4G is essentially the same phone as the quad core Agora Kogan released last year, with the addition of LTE connectivity. The 5-inch 1280 x 720 IPS display is reminiscent of last year’s model, as is the 1.2GHz quad-core processor.

What is different is the fact Kogan has shipped the Agora 4G with Android 4.4.2 KitKat installed, which means you get the joys of Google Now, improved cloud support and the buttery smooth transition between pages and apps.

The battery has also been boosted to a 2520mAh Li-Ion model, which Kogan claims gives a full-day’s usage.

We haven’t had the phone long enough to test the veracity of that statement, but there’s never been an occasion we’ve complained about bigger batteries in smartphones, so we’re not going to start now.

The Agora 4G feels nice and comfortable in the hand. It’s certainly not a premium-styled finish, like the Xperia Z2 or the HTC One M8, but the plastic backing feels rather rubbery, giving a pretty good grip around the 5-inch screen.

The front of the phone, like most Android devices, is pretty sparse. Below the screen are the three traditional Android soft button – back, home and recent apps – while the 2MP front facing camera sits above the screen.

Strangely, the phone’s speaker on our review unit had a distinct coppery appearance that seemed at odds with the design of the rest of the phone. We’re not sure if that’s an intentional design decision or not, but it does look a little weird.

The power button rests on the top of the phone on the left hand side, with the 3.5mm headphone jack sitting just right of centre, while the bottom of the phone houses the mic and MicroUSB charging port. Naturally, you’ll find the volume rocker on the phone’s right hand side.

The back of the phone comes off to reveal the glorious innards, from the Micro SD card and Micro SIM to the locked in battery. The fact you can’t replace the battery does surprise us a bit given Kogan founder Ruslan Kogan’s love of open platforms, but it is definitely a trend we’re seeing more and more of.

The 8MP rear camera does have a nice metallic red ring around it that while functionally pointless, does offer confidence in the phone’s quality.

We were only given 48 hours with the Agora handset so we’re not confident laying down a definitive opinion on the device, but we can say that from the limited time we had, we were suitably impressed.

The phone feels snappy – loading a webpage via the Chrome browser or playing a game like Dino Hunter is fairly fast and responsive, even if it is a little bit slow to load.

Flipping between pages on the home screen or cycling through photos is fast and responsive, just like you’d want it to be.

The 8MP camera seems fairly serviceable, although it’s not going to set the world on fire. In our early testing, it seemed to struggle with focusing, with shots coming out blurry regularly.

You can get the phone to focus, but the end result seems a little washed out compared to the quality of shots you’ll get from phones like the Galaxy S5 or iPhone 5S.

The screen itself is more than serviceable, although colours don’t pop like they do on an AMOLED screen. Not that you would expect them to for the price you’re paying though.

But the real question is the LTE performance. We threw in a Telstra 4G SIM and ran Speed Test a few times in North Sydney, and the results were definitely respectable.

Ping times consistently hovered around the 40ms mark, with downloads consistently working around 30Mbps and upload speeds around 23Mbps.

Just running through the spec sheet of the Kogan Agora 4G, there are plenty of attractive selling points on offer. From the HD screen and the quad-core processor to the 2350mAh battery and inclusion of KitKat, the phone’s features list reads like it comes from a much more expensive class of phone.

But for a $229 device, what is on offer is almost unparalleled. While the previous quad-core Kogan phone was let down by a lack of 4G connectivity, this model is now throwing the gauntlet down to not only cheaper handsets, but flagship phones as well.

Until we get more time to form an official verdict, we’ll hold back from officially recommending this device, but it’s safe to say that if you need a cheap 4G handset in the near future, the price of this model is most definitely right.