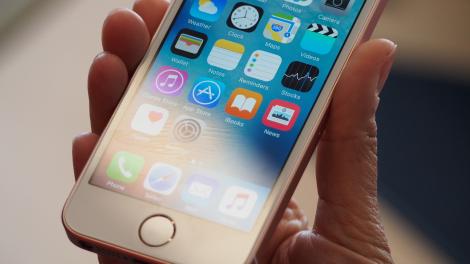 This is a flash hands on review to give you the chance to see what the phone is all about as soon as possible. Stay tuned as we’ll be expanding and upgrading this review very shortly with more info.

When the world zigs, you zag. Buy low, sell high. When the entire smartphone universe skews big, you reinvigorate the small. That, in a nutshell, is the mentality behind the iPhone SE.

Though the 4-inch form factor never really left Apple’s lineup, you’d be hard-pressed to know that the iPhone 5s was still an option as of yesterday. The iPhone 6/6s (4.7-inch) and 6 Plus/6s Plus (5.5-inch) have dominated the landscape over the past two years, leaving an opportunity to re-seize the market for non-gargantuan phones.

What’s particularly special about the iPhone SE is its newness. Rather than Apple introducing a new hero device and pushing an older phone down-range (as it did when the iPhone 5S found itself selling for $0 on contract), the iPhone SE is purpose-built device. It’s small, relatively speaking, but it’s also mighty.

The camera has been overhauled and upgraded, boasting a 12-megapixel sensor and True Tone flash that puts it right up there alongside the iPhone 6s. There’s also a potent 64-bit A9 chip, Bluetooth 4.2, a display that gets hella bright when you need to take a selfie in a dimly-lit room, and a starting price point of just $399 (16GB).

The exterior is svelte and sleek — every inch an iPhone, as we’re surmising Apple would say. The same exemplary precision found on the high-end iPhones is also found on the iPhone SE. At last, you don’t have to feel as if you’re settling just to get a phone that’s easier to handle.

Handling the iPhone SE is a lovely affair, particularly if you’re coming from the iPhone 6s Plus. It’s dainty — cute, even — and though it obviously feels exactly as if you’re handling the iPhone 5s, there’s something extra novel about it now. It’s no longer the norm; the 4-inch form factor is now the exception.

The fit, finish, and polish is just like the iPhone 5s. Honestly, if you weren’t told any different, you’d think you actually were handling the iPhone 5s, as the exterior frame remains the same.

Speed in a small package

Using the phone, however, is markedly different than using the iPhone 5s. The A9 chip enables it to open apps just as quickly as the iPhone 6s. It’s honestly quite refreshing to feel this much power in a phone this small. You just haven’t been privy to Apple’s top-end hardware in its smallest iPhone in a few years.

We weren’t able to test out the revamped 12-megapixel iSight camera, but plan to just as soon as we get ourselves a unit outside of the hands-on area.

Notably, it looks and feels just like the iPhone 5s before it. It didn’t get slimmer, or more round, but we kind of dig it. There’s something novel about maintaining a tried-and-true design motif while overhauling everything within. Indeed, that’s exactly the model Apple followed when transitioning from the iPhone 6 to 6s.

We’re live at Apple’s headquarters in Cupertino checking out the new devices in the flesh, and will be updating throughout the day with real-time impressions.