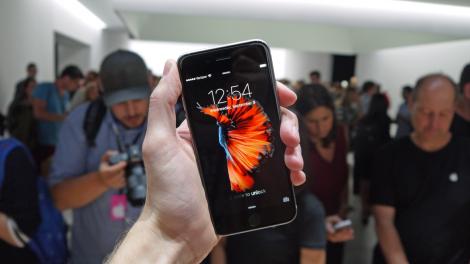 I often dread the odd years for Apple launches – the iPhone 3GS, 4S and 5S have all been rather dull compared to the phones that sat either side of them.

That’s because there’s usually very little difference in the “S” models from their predecessors, thus making it hard to get excited.

This time around it’s a little different: the iPhone 6S is both a great upgrade from those ‘stuck’ on a 5S, and a decent phone in its own right. If you’re ready for an upgrade from the old design and are desperate to stick with Apple then this is a great handset to go for.

The same stick that some use to beat iPhone fans still exists: yes, visually this is almost identical to last year’s redesigned iPhone 6, with the same ceramic metal feel and slightly protruding camera that means you can place it side by side with the iPhone 6 and not really notice the difference.

The only marginal change is the additional thickness, very likely to facilitate the new 3D Touch technology on the screen.

Compared to other phones on the market the iPhone 6S still manages to mix that feeling of premium build with a light and thin phone – it’s a joy to hold.

Apple’s nod to the improved build with reinforced 7000 series aluminium is clearly a direct result of the iPhone 6’s ‘Bendgate’, where the phone was slightly prone to changing shape if pressure was applied. While Apple doesn’t need sympathy, it was still a bit harsh that it got singled out for this issue when many other handsets could also bend if you tried.

Either way it’s now much less prone to changing shape even in the back pocket. Pro tip for all phone owners: don’t apply force to the expensive object in your pocket, mmmkay?

Now onto the biggest change for the iPhone 6S, 3D Touch. This changes everything for Apple users, and while it’s not enough of a reason to upgrade from the 6, it’s a pretty nifty trick that again promises to make current iPhone 5S owners feel like they’re getting a real upgrade with their new phone.

The main difference 3D Touch brings is the ability to interact with on-screen instructions in different ways. It’s too early to delve into all the ways that the new power will work, but the system (for those that haven’t seen an Apple Watch or the new Macbook) is simple: you can tap like before, but press a bit harder on an icon or message and you’ll get a new menu popping up.

Imagine it’s like right-clicking the mouse to get a secondary menu, and you’re pretty much there. It’s a cool new feature, although one that app developers will need to work with for a while to really get the best out of.

The iPhone 6S screen, new touchy-powers aside, is pretty much identical to the one seen on the iPhone 6. That’s not necessarily a bad thing… while it’s true that Apple has one of the lowest-res screens of all the flagship phones, the way it’s displayed (laminated to the glass, highly colorful) makes it still look beautiful

The expected upgrade from the iPhone 6’s camera has arrived: the iPhone 6S has a 12MP snapper and it looks like it’ll deliver in spades. The need to jump in megapixels was rarely warranted for a brand beyond the need to impress consumers with higher numbers, but this year things are starting to jump forward.

The Samsung Galaxy S6 is taking stunning photos with a 16MP option, and Sony’s Xperia Z5, packing a 23MP sensor and super fast autofocus, actually uses those additional pixels to good use… Apple needed to keep up.

While I’ve only tested the new camera briefly, there’s no doubt that it’s an upgrade. It still retains the speed of snapping I’ve come to expect from an iPhone while the clarity is there to see too.

The usual feature set – which is actually pretty useful – is also still present, with time lapse and slo-mo both present and correct. Apple still hasn’t fixed the most annoying part of the camera (sliding the finger up and down to change the exposure as the only way of altering the photo, which is basic and actually quite hard to do) and I was hoping to see a manual mode here.

The new Live Photo option, which takes a 1.5 second photo either side of the shot, feels more like a gimmick than a really useful option. You have to remember to activate it, but it’s really impressive that it doesn’t seem to affect the shutter speed – it should take a while either side, but it buffers while you’re taking the picture.

It’ll be more of a ‘remembered delight’ rather than something you aim to do with your pictures.

Apple’s A9 chipset and upgraded RAM

As per usual, Apple’s thrown in an upgraded chipset in the shape of the A9, and as expected it brings with it a number of changes. The battery will last longer, the phone will run faster and the gaming experience will, once again, be better than anything we’ve ever seen.

It’s a 64-bit architecture, which means some efficiency when opening and closing apps (although their size is larger and therefore take up more space on the phone, which makes Apple’s decision to keep the 16GB variant of the phone all the more infuriating).

That 64-bit system still can’t be used properly as we don’t have the necessary 4GB of RAM needed to make use of it. Word is, it has another 1GB of RAM from last year, with 2GB now powering things nicely under the hood and creating a decent snap under the finger – along with making games and apps run that much more smoothly at the same time.

It might not seem like much of an upgrade, but I bet it blitzes the iPhone 6 (and especially the iPhone 5S) in the speed tests.

Apple’s not said anything about the RAM under the hood, which means it’s either the same 1GB from before (likely) or it’s just keeping with tradition and not mentioning the RAM – in the same way it doesn’t publish the clockspeed of its chipset – as side by side it’s not in the same league as the big Android phone on the market.

This is actually the most impressive ‘S’ variant of an iPhone I’ve seen yet, and one iPhone 5S users are going to flock towards. While there’s still a part of me that rages about Apple ‘getting away’ with releasing the same phone visually – no other brand could get away with such a thing – it’s the fourth time its done it and people really like buying it.

If it were to have a new frame, then this would be a brilliant new phone without exception. The new 3D Touch, upgraded camera and improved speeds really offer tangible benefits, and combined with a solid upgrade to iOS 9 and the impressive build, Apple’s made a very decent phone.

If you’ve got an iPhone 6 already, there’s little point to buying this for a few updates. For anyone on an older model, or thinking of defecting from Android, then this worth is checking out – especially now it’s getting price matched to other flagship phones on the market.