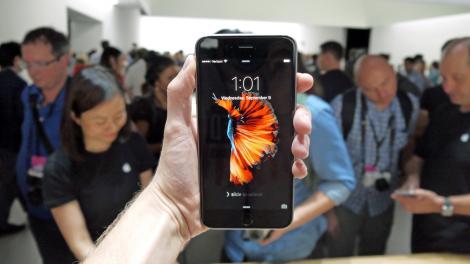 Apple’s done it again – launched the smaller ‘normal’ iPhone and then supersized it – ladies and gentlemen, welcome to the iPhone 6S Plus.

Aside from the fact that’s a lot of words to say (although let’s be glad Apple’s not calling ‘new Big iPhone’) I’m glad the phablet is now consistently coming from the fruity brand. It appeals to those that like what iOS and Tim Cook’s Crew offer in a phone, but find things like the battery and screen lacking.

It’s like a nod toward to Android phones without going anywhere near the ‘wild west’ approach Apple is so against.

Well, it’s bigger than the iPhone 6S. Shocker, I know. But it’s also visually almost identical to last year’s model – which is a little bit of a shame as that device was very bezel heavy.

It’s a tiny bit thicker than before, to facilitate the 3D touch screen (and hopefully larger battery, although no word on that from Apple).

I know the 6S Plus needed to pack the bigger battery than the 6S and have a 1080p screen, but the 5.5-inch display feels so much more swamped by the iPhone’s frame compared to the LG G4. That phone has the same size viewing area but a sharper resolution and bigger battery.

The fluid, ceramic-like curves prevail though and the iPhone 6S Plus is still a very light and easy to hold device. You can’t forget that it’s a phablet though, and will need to manipulate it in the palm to make proper use of the screen – get ready for a lot of two-handed use here.

If you’re coming at this from the iPhone 5S, you’re going to be blown away by how gargantuan it is to hold – and even the horrendously-named Reachability (double-tapping the home button to bring the top of the screen down to within reach) doesn’t really help.

But you’re buying a phablet, not a mini phone, and you’re after the bigger screen and battery that offers – and that comes with compromises.

The bigger screen is the same 1080p resolution that we expected – while the trend to QHD displays is increasing, the content to show on them is still sparse. They do improve the image on the screen (and Sony’s even gone as far as bringing out a 4K display in the Xperia Z5 Premium) and it would have been nice to see Apple do something cool with it, but given how fragile iPhone batteries are, this possibly isn’t the best idea.

The screen’s been upgraded in another way though: 3D Touch is now included, meaning that like the Apple Watch and new MacBook you can get different interactions with the screen depending on how hard you press.

There are loads of cool things the phone can do now, such as using additional force to preview messages and web pages as links, but I’ll need to have a proper move through the new phone to really discover what they all are.

The main thing is remembering that the option is there though – the act of tapping on a touchscreen to make things happen is so ingrained in most smartphone users’ consciousness that it’s hard to remember there’s a ‘secret door’ to some things – it’ll be intriguing to see how Apple deals with that.

But when you do remember, it works nicely, and the haptic engine underneath buzzes pleasantly to let you know that the action is successful. Go me.

What do people like doing with their phone more than idly looking nothing when they’re supposed to be interacting with real life human beings in social situations? Well, if you’re anything like my niece, nothing, but in theory the answer would be taking pictures.

The iPhone 6 Plus has a decent 8MP camera, but Apple realised that it needed to step up when the likes of Samsung and Sony are unleashing 16MP and 23MP sensors, and actually finding a good reason to have that high a number in there.

12MP might not sound like a lot, but it means that the shutter speed is faster than ever, the clarity looks crystal clear on the larger 5.5-inch screen and the overall photography standard from the iPhone is improved once more.

Apple’s spent a LOT of money on the ‘Shot on iPhone 6’ campaign last year, and if this phone can outdo those snaps (and there’s no reason to say it can’t) then it will have a promising camera on a decent phone.

The Live Video element, where the iPhone 6S Plus will take a 1.5 second video before and after your snap to bring a kind of Harry Potter element to things, is cool if not needed. It’s something you’ll need to remember to ‘3D Touch’ in order to enable.

It’s impressive the shutter speed isn’t impacted when you’re doing this though – it’s still as rapid as ever and the pictures are amazing for a 12MP sensor.

Loads of power and longer battery

The iPhone 6S Plus has been embedded with a number of useful new elements under the hood that should make using it an improved experience, especially if you’re one of the many coming from a phone launched in 2013.

The iPhone 6 Plus had a decent battery life thanks to the larger frame allowing Apple to pack in more mAh, but it still wasn’t market leading. While battery life hasn’t been claimed yet it should be a lot longer thanks to that new chip.

It could also be because of the new A9 processor being used too – not only does this new chipset allow for much greater graphics and a smarter experience under the finger but it should be more efficient and therefore allow for a longer battery life.

Apple, as usual, didn’t let us know how much RAM was under the hood of the iPhone 6S Plus, but if the rumours of 2GB are true, gaming and general speed will be improved – and the latter seemed to be borne out in my limited testing.

The larger iPhone is never going to be the biggest seller of the new Apple handsets, but the iPhone 6S Plus is definitely going to entice a new slew of phablet users.

Those stuck with the ‘larger’ iPhone 5S (well, bigger than the dinky 4S, anyway) will find this phone positively unwieldy at first, but the extra heft offers a lot of other advantages, like (hopefully) longer battery life, an improved screen and more space to look at that lovely internet.

It’s obviously going to command a higher price, and it’s up to you whether the 3D Touch and upgraded camera is enough to keep you from buying last year’s cheaper model, but apart from being so similar in design this feels like quite an upgrade from Apple.