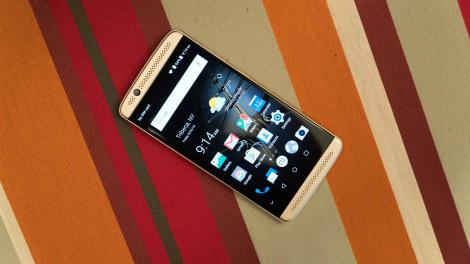 ZTE Axon 7 Mini takes a lot of what we liked about the shockingly good ZTE Axon 7 and shrinks everything down to a more compact size without too much compromise.

It’s a little easier to hold in one hand if you don’t have meaty paws and it’s slightly easier on your wallet, too, thanks to its more affordable price point.

Smallness is what’s this phone is all about. But it doesn’t skimp on too many features. It has Snapdragon processor, 3GB of RAM and a 32GB of storage inside.

There’s, a microSD card slot that provides more space if you need it, or it becomes a dual SIM slot. There’s Hi-Fi audio, front-facing speakers and and a fingerprint sensor to top it all off.

This mini variant isn’t designed to be the fastest phone on the market, but it’s going to get you through the day with true mid-range specs and decent battery life.

The best part about the ZTE Axon 7 Mini is it brings the same exact phone design to everyone for a cheaper price. It costs $299 in the US and €299 in Europe.

Although there’s no Axon 7 Mini UK pricing available, the price is likely to be £250, since the straight up conversion from Euros to pounds is £253.

The ZTE Axon 7 Mini release date is happening throughout September, depending on where you are in the world. Expect it in the US first, and everywhere else by late September, according to ZTE.

Just a word of warning to anyone ordering this phone in the US: while it has CDMA bands to make it work with Verizon and Sprint, it’s not compatible with either network just yet.

Both CDMA networks need to certify this phone to make full use of their network. AT&T, T-Mobile and all GSM carriers will have no problems whatsoever out of the box.

It’s becoming easier to find a mid-range Android phone that’s made of something other than plastic in 2016, and the ZTE Axon 7 Mini adds another suitable option to the growing list.

This is an affordable, all-metal phone that competes with much higher-priced handsets from Samsung, LG, HTC and Apple. The design will fool everyone into thinking it costs more than it does.

What’s great about the ZTE Axon 7 Mini is that it’s light at 153g and therefore easier to hold in one hand – one of our few gripes about the bigger and even more slippery ZTE Axon 7.

The back of the phone remains a bit slippery since it’s made of the same aluminum material, but it’s easier to wrap your hands around the entire thing thanks to its smaller screen.

The screen now measures 5.2 inches, giving you an alternative to the 5.5-inch display of its bigger brother. The resolution has also been dialed back to 1080p instead of 2K.

The AMOLED display still looks fantastic at Full HD and the brightness is the same if not better on the Mini version. 1080p is all you need on a phone of this size since it’s not Google DayDream VR compatible anyway.

The Mini’s fingerprint sensor is on the back and remains quick way to unlock the phone, while the front-facing speakers make a powerful statement on the otherwise minimized phone face.

ZTE was able to combine the Hi-Fi DAC and ADC audio chips into a single AKM 4962 chip, and from our music playback testing, it sounds just as good from this smaller phone as it does on the larger Axon 7.

The Axon 7 Mini also dials back its Qualcomm-made chipset. It still uses a newer Snapdragon processor, but it’s the second-tier Snapdragon 617 chip.

Qualcomm is always adamant that its 600 series is still powerful, only not its over-the-top best. That’s what we expect from the ZTE Axon 7 Mini performance.

It’s coupled with 3GB of RAM, down from 4GB, and boasts 32GB of internal storage, backing down on the generous 64GB offering we liked so much about the ZTE Axon 7.

The good news is that there’s still a microSD card slot to cover you for 256GB of expandable storage, and it doubles as a second nano SIM card slot. That’s really helpful for frequent travelers.

We’re looking forward to seeing how these mid-range specs perform under pressure in our full review testing. We can tell you about the interface right now, though.

ZTE Axon 7 Mini runs Android Marshmallow with ZTE’s MiFavor operating system skin on top of it. This doesn’t deviate from stock Android too much, like some Chinese phone makers do.

In fact, ZTE’s default theme for the phone is called Stock Android, with its MiFavor skin playing second string within a submenu. It’s a good decision.

Since this is an unlocked phone without carrier restrictions in the US, there are only a couple of pre-loaded non-Google apps here, like ZTE’s helpful My Voice software. It helps you snap photos and unlock the phone with your voice and works well enough to keep turned on.

The ZTE Axon 7 camera had a strong camera in daylight and it was its weakest point as soon as the sun set or you stepped indoors. We don’t expect that to change with the Mini.

It has a 16MP camera with a f/1.9 aperture. It lacks the 20MP and OIS of the bigger Axon 7, but carries EIS and PDAF to steady shots and a sapphire lens to keep the camera protected.

Battery life also requires further testing since its capacity is called down to 2705 mAh from the Axon 7’s 3250 mAh battery.

You may get a fewer hours from the ZTE Axon 7, though its smaller 5.2-inch display and 1080p resolution may even things out in the end.

Smallness is what the ZTE Axon 7 Mini is all about. It won’t stretch your hand or budget, yet still gives you a completely metal phone that you expect to cost more.

The Mini isn’t going to rival the performance of flagship devices, but you won’t find many of its best features on higher priced setups. It’s a fully capable Android phone, with a bright AMOLED display, front-facing speakers with Hi-Fi audio and a microSD card slot that doubles as a second SIM card slot. Best of all, it’s affordable and comes unlocked, meaning everyone is invited.