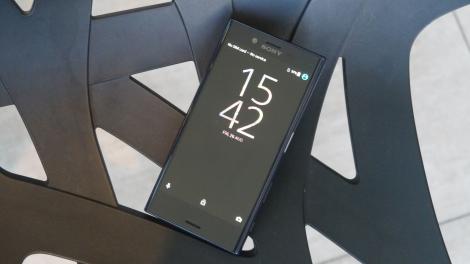 Arguably one of Sony’s greatest mobile products ever, the Xperia Compact line offers something entirely different to its competitors, and the Xperia X Compact is no exception, delivering high-end specs in a small package, for those who don’t want a large phone.

But in our limited hands on time, it’s not quite clear how the Xperia X Compact is better than the Sony Xperia Z5 Compact, released back in September 2015.

The new phone does look different at least. Small design tweaks make the Sony Xperia X Compact a slightly slimmer handset than previous iterations, and there’s also a ceramic-like back plate, which looks good but doesn’t feel as nice to the touch as the frosted glass on the back of the Z5 Compact.

Much like its larger sibling, the Xperia XZ, this phone has been rounded off at the edges, helping it sit more comfortably in the palm of your hand than previous Sony handsets.

The bottom edge of the X Compact is home to a USB-C port, which allows you to plug a charger in either way around. As such it’s slightly more practical than micro USB, and this is the first time Sony has embraced the technology.

To unlock your phone there’s a fingerprint sensor on the side-mounted power button, which is easy to reach when you’re holding the handset, but you may find it a little awkward if you’ve got the phone laid down on a desk.

The Xperia X Compact comes with a 4.6-inch display, so no matter how small your hands are you’ll probably be able to reach each end of the screen with ease, and those upgrading from an iPhone 5S with its 4-inch screen will find this a much easier jump than to other, larger Android phones.

The screen on the X Compact is only 720p, so it won’t make as much of an impact as the rest of the Xperia X range. In fact, the display is noticeably less sharp than the Full HD Xperia XZ, and that’s a big shame when Sony claims the Compact is toting flagship specs.

The new Compact’s screen is also no higher resolution than the Xperia Z5 Compact, which is a bit of a missed opportunity, since the company could have offered a truly beautiful display.

If you sat this phone next to one with a 2K display like the Samsung Galaxy S7 Edge, or even the Xperia Z5 Premium and it’s 4K screen, you’d be quite disappointed in how it looks. The smaller size means the Xperia X Compact arguably doesn’t need a 2K screen, but the phone could certainly have benefited from being 1080p.

Performance could be another issue for the Xperia X Compact, as although the phone felt quick when using it for our hands on time, it has a Qualcomm Snapdragon 650 processor, while the Xperia Z5 Compact uses a higher-end Snapdragon 810 processor.

That means a phone from last year, in the same family and which launched at a likely similar price, is potentially more powerful than the 2016 model.

That feels like a very strange step from Sony – but the X Compact may be just as powerful in practice, we’ll have to wait for the full review and our official testing to find out.

The Xperia X Compact does at least pack more RAM than last year’s iteration at 3GB, which should mean you’ll be able to push the phone to its limits and not have to worry about it stuttering mid-way through your media.

The Xperia X Compact’s camera seems to have been the main area of improvement over the phone’s predecessor, but the handset has the same 23MP sensor we’ve seen on earlier Xperia phones.

Instead, the improvements include minor changes like new 5-axis stabilization, to ensure your videos are less shaky.

The Xperia X Compact also has a new laser autofocus technology, which should work in combination with the predictive hybrid autofocus tech Sony launched last year, to better enable the camera to focus on moving objects.

In our quick time playing with the camera we noticed the shutter speed was quite fast and it was simpler to shoot moving objects without blur, but a standard landscape shot doesn’t look any better than on say the Xperia Z5 with its 23MP sensor.

There’s a 5MP selfie camera on the front, and while this isn’t as great as the Xperia X’s 13MP snapper it can still take a social media-worthy picture of your mug.

Then there’s also a 2700mAh battery to power the whole thing. We don’t know exactly how that will fair, but considering it’s only powering a small 720p screen we think it may offer quite a good battery life.

Even though the Xperia X Compact isn’t as high-spec as the Xperia Z5 Compact, the new mini still looks to be one of the best upper-end small phones you can buy right now.

Whether the X Compact is worth buying over the Z5 Compact will all come down to the pricing. If Sony’s new mini is the same price or more, it may not be worth your while getting it.

But if it’s priced reasonably or proves more powerful than the specs suggest then the Xperia X Compact could be a great choice for fans of the smaller things in life.