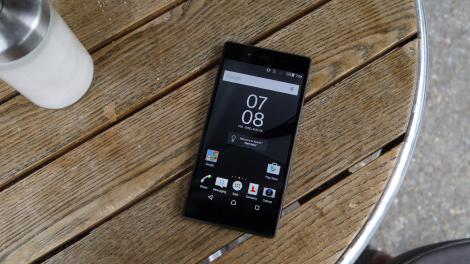 I feel like this is a phone I’ve seen a thousand times before, another sculpting of the original Xperia Z from years ago. And yet, despite Sony once again refusing to try something different with its flagship range of smartphones, there’s something impressive about this handset.

That’s not to say that things are rosy at Sony. The company has been pushing its brand in the smartphone space for years with limited success – it’s needed a big hit for a while, and yet it’s just spend time refining the same formula every six months or so.

That means that while the Xperia Z5 offers some genuinely innovative features, it’s going to be hard to sell those to the disinterested consumer who’s more wowed by the glass Galaxy S6 or an iPhone with a bigger screen.

The design of the Xperia Z5 is still one that feel solid and powerful in the hand, the boxy design once against slimmed down to encase the 5.2-inch IPS Full HD LCD screen.

The nylon corners are once again back, which slightly jars with the smooth exterior, but the protection they afford means they’re a welcome addition for the clumsy.

The screen still has the unsightly bezel that Sony is in love with, which add extra heft to the phone. However, the secret front-facing speakers above and below the handset help to offset that size somewhat, with strong performance when watching movies without headphones – putting Sony squarely ahead of the chasing pack in second place behind HTC’s Boomsound speakers.

The back of the phone’s been retooled to include frosted glass in a range of colours, designed to help mask the fingerprints that blight many top end phones encased in the reflective material, and the effect does dial up the richness of the chassis. I’m still not a fan of the boxy design that Sony offers for its phones, but the overall look and feel is one of higher quality – the engraved Xperia logo adding to that effect.

And that’s with the phone being dust and waterproof as usual – for something that looks like this to be able to survive a trip into the pond and desert is really impressive.

The thing that most people will look at the Sony Xperia Z5 for is the camera – this is somewhere that Sony has gone back to the drawing board and produced something rather remarkable.

The all new 23MP sensor offers not only sharper snaps (which let you take clear pictures even at 5x zoom) but the main draw is the 0.03 auto focus. Considering Samsung and LG both have been crowing about their 0.7 and 0.6 second snappers respectively, this puts the argument of who’s the fastest to bed.

And the performance is magnificent. Whipping the phone up and down and taking random photos of objects constantly offered a clear and in-focus picture, way beyond anything I’ve seen on a smarpthone up to this point. Obviously if you’re not stopping the phone to at least frame a shot you’re not going to get a decent pic, but even then it’s not far off.

The question of how good the camera is remains though – Sony’s had a bunch of decent camera tech stuffed into its phones for years now, and yet manages to let other brands usurp it in terms of making the most visually appealing snaps.

The demo pics looks great, colourful and full of life, but that’s the best the brand can do – it will be interesting to see how snapper performs in the real world.

Sony even thinks it’s solved the thermal issues of previous phones, where camera use would cause the phone to overheat and shut down inexplicably. Early testing showed that the phone could go over ten minutes taking 4K video and only got slightly warm, so perhaps Sony’s claim of improved thermal management is true.

Sony’s been touting itself as one of the best-performing phones when it comes to battery for a while, and with the new Xperia Z5 it’s no different.

The company believes it can offer a two day battery life in normal usage, through a variety of methods: the battery being 2900mAh for a start, which is bigger than a lot of competitors’.

However, the option of Stamina mode and an intelligent screen are the big selling point – the latter seems the most interesting. Essentially what Sony is doing is ‘pausing’ the screen when showing a static image, turning off the CPU so it saves half the power.

Given the screen draws most of the power when a phone is turned on (in normal conditions) this could be a real winner, and build on Sony’s impressive performance in the space.

Sony’s iconic round power button is gone. The side of phones and tablets has been adorned with the protrusion for years, but now the place is taken by a lozenge-shaped button, flush to the side of the phone. The reason for this is the addition of a fingerprint scanner, bringing the Xperia Z5 up to the level of the iPhone and Galaxy S6.

While we couldn’t test it fully (as it would have locked the demo units to our fingerprints) the demos we were shown were hugely impressive, merely tapping the power button to turn on the phone from sleep and then seeing it unlock instantly.

The power button on all the units offered was oddly stiff and creaky though, which was strange as both the Xperia Z5 Compact and Premium models were smooth to press, so it was probably just pre-production issues.

Sony doesn’t seem to be offering anything amazing with the fingerprint scanner, but when Android Pay lands users will be able to at least get a secure experience when going contactless with their phone.

There are the usual Sony goodies on offer as well, with PS4 Remote Play and Hi Res audio on board, with the former likely to be decent thanks to the rich and clear display – it’s not been obviously upgraded from the previous screens on Sony Xperia phones, but it looks a little clearer.

The Hi Res audio too hasn’t been upgraded, but new headphones from Sony will allow you to have a better noise cancelling experience while still offering decent sound from even normal MP3s.

We managed to catch the Xperia Z5 on video as well.

I really, really hoped to see an amazing phone from Sony with the Xperia Z5. That’s not to say what’s on offer isn’t impressive – the camera in particular is worth checking out – but I’ve seen this phone six times already.

The same boxy design with post-20MP camera has been seen countless times, and while it gets slightly refined with each iteration it’s largely the same as the previous model. I’m not saying brands should have to upgrade every little thing just for the sake of it, but in the same time since Sony launched the Xperia Z every other brand has completely overhauled the look of their brand to keep things fresh.

Sony fans will really enjoy the Xperia Z5, without doubt. The camera seems genuinely innovative and if the brand can uphold its battery promise, combined with a premium design, it’s got the right formula for a decent smartphone – it’s just whether it can make enough of noise about it to get consumers interested.