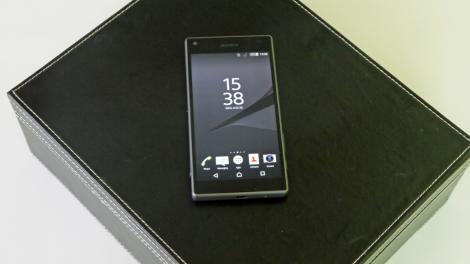 The Sony Xperia Compact range has always been something that never gets the recognition it deserves. Sony is the only brand that doesn’t compromise on the power of the smaller phone in its range, keeping up the same premium experience it offers on the ‘normal’ flagship phone.

There are some obvious differences here: the materials used, the size and resolution of the screen (4.6-inch 720p – very similar to the iPhone 6) and the RAM and onboard memory on offer (only 2GB /16GB, compared to the 3GB and 32GB of the Xperia Z5 and Xperia Z5 Premium), which does slightly diminish the effect somewhat.

The only real issue I can see here is the 16GB of storage – that’s going to run out a little too quickly given the amount of large apps on the market right now, and given the Xperia Z5 Compact has the high-end 810 chipset built in, there’s every reason why users would want to use the phone to the fullest extent.

However, it’s worth noting that such compromises do allow for a cheaper price point, which does help magnificently in terms of making the phone more attractive.

The design of the Sony Xperia Z5 Compact is rather curious. It’s a phone with a retooled exterior, losing the translucent frame of the Z3 Compact and going for the same metallic rim – with engraved Xperia logo – as the other Z5 phones.

And despite not really being thicker than its predecessor, it looks much chunkier, thanks to the larger rim around the edge and its boxier design.

It’s a shame that the materials used on the outside aren’t the same high-grade metal as the larger phones, but once again its a reminder that Sony is trying to offer this phone at a lower cost.

It looks a bit like larger lego, if I’m honest – a phone that would look great in a stack of 12 or so. Perhaps something to think about if you’re looking to equip your entire family with smartphones at Christmas and want to play an expensive game of Jenga.

While I’m hoping its just pre-production issues, I’m a little worried about the port that covers the microSD and SIM slots on the side of the phone, as it sticks up slightly.

I’m not worried that this will let water in – Sony would have tested the hell out of the Xperia Z5 Compact to make sure it was as water and dust resistant as the others in the range – it ruins the sleek feel of the phone in the hand.

The 720p screen will be something Sony critics will use to batter the phone with – perhaps rightly so. While I don’t think we need tech just for the sake of it, and the lower cost is also something people should be happy about, this is still the same screen we’ve seen from last year.

There’s no discernible upgrade, and other brands (such as HTC) have shown that a Full HD display at this size can look sharper and more defined, which shows there’s actually a reason to have the better tech in there.

That said, Sony’s done a marvellous job at adding in the Bravia and X-Reality tech into the mix, making everything on the screen look great. Even movies look decent, and with the front facing speakers you definitely get the feeling you’re using a high end phone.

Does the Xperia Z5 Compact need a Full HD display? Probably not… but it would have been a lovely upgrade.

The camera technology that Sony’s imbued the Compact with is the same impressive sensor that it’s used on the Xperia Z5 and Z5 Premium, which means users get a brilliant 0.03s autofocus and 23MP snapper on a mid-range (ish) phone.

That’s probably the greatest selling point here, showing the world that Sony will use the best tech where it can on the smaller phone to keep the experience consistent.

In testing, the speedy autofocus just works. Whip the phone around, try and get a picture that’s about to disappear forever and you’ll generally get a clear and sharp snap where other phones simply wouldn’t be able to do the same thing.

The only issue here is the start up time of the camera. It seems slightly too slow to wake the phone from sleep, which means you’ll miss the brilliant moments from time to time.

But if the handset is unlocked and in photo mode, you’re going to be able to capture more moments than others.

The battery life of the Sony Xperia Z5 Compact should be pretty darn good indeed – there’s a 2700mAh battery under the hood, which is way bigger than the competition at this size.

That extra size is further boosted by the clever battery tech that Sony is touting: if the screen is showing a static image, the phone will then switch off the CPU and thus reduce the power drawn from the screen by half. Given that the display is one of the biggest juice suckers on a smartphone, this could have a massive impact.

Couple that with the lower RAM and resolution of the screen, and it’s feasible that the Z5 Compact will be able to easily last two days in normal use – although I’m always extremely sceptical about saying something like that until it’s properly tested.

In another move showing that Sony wants to make the Xperia Z5 Compact rather good, the fingerprint scanner is present and correct too. This is located on the now-lozenge-shaped home button, rather than the iconic circular protrusion of years gone by.

It seems to be super quick and accurate too, with a single tap waking the phone from sleep and then unlocking it biometrically, ready for use and away from prying eyes should the phone be lost.

Given Android Pay is on the way, this is a really useful feature to have – and again, it’s great to see it in the cheapest model in the Z5 range.

I’ve always had a soft spot for the Sony Xperia Compact phones – any brand that doesn’t skimp too much on specs when releasing the ‘baby brother’ to a proper flagship gets my vote.

The Z5 Compact is, once again, a solid phone with a decent spec list and the lower price you need if you’re going to entice in more customers.

Anyone short on cash but looking for a good camera experience should be excited about what’s on offer here – when you think it also has PS4 Remote Play and Hi-Res Audio under the hood, you can see why there are a lot of reasons to get excited about the new handset.

Yes, it has some compromises, and the design isn’t going to be to everyone’s tastes, but the sheer range of technology and effort put into making this part of the family should mean that all Sony fans should check out the Z5 Compact – it could be the little grunt nugget you’ve been waiting for.