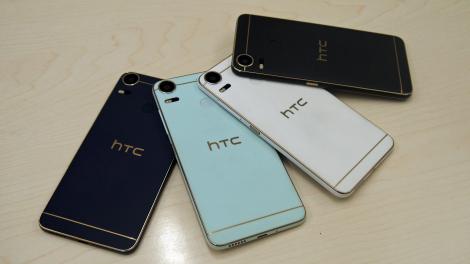 HTC’s duo of new mid-range smartphones aim to bring some flagship style to the middle of the market, and it’s the HTC Desire 10 Pro leading the way as the most powerful Desire handset ever, borrowing several features from the HTC 10.

While its cheaper brother, the Desire 10 Lifestyle, is firmly focused on audio, the Desire 10 Pro is a more well-rounded device, with a punchy octa-core MediaTek Helio P10 processor, 3GB/4GB of RAM, 32GB/64GB of internal storage, a microSD slot, a fingerprint sensor and the same 20MP rear camera as HTC’s 2015 flagship, the HTC One M9.

Those are solid foundations on which to build, and with an appealing design too the Desire 10 Pro could well make waves – but that depends to a large degree on the price, which is currently unknown.

The HTC Desire 10 Pro will be available to order from November – which means you’ve got some time to work out if it’s a phone you may want – but we’ve been told it won’t be coming to the UK.

As for how much the Desire 10 Pro will set you back, we’re still waiting to hear final confirmation from HTC, and this will dictate the potential success of the handset.

What we do know is that the Pro will be more expensive than the Desire 10 Lifestyle – which may mean the Pro could be costlier than we’d like, as the Lifestyle is also marketed in the mid-range.

If the Taiwanese firm can keep the price down to the levels of the OnePlus 3 then the Desire 10 Pro will be an attractive, disruptive presence in the market – but any higher and it could struggle against a number of cheaper, but just as feature-packed, rivals.

The HTC Desire 10 Pro hasn’t inherited the premium metal unibody design of the HTC 10, and we feel like we need to get that out of the way ASAP – but not because it’s necessarily a bad thing, as the Desire 10 Pro is still a good-looking phone.

At the heart of the 10 Pro is a metal frame, ensuring that it feels sturdy in the hand, but the main body material is soft-touch polycarbonate, which delivers a pleasing level of grip and comfort.

Measuring 156.5 x 76 x 7.86mm, the Desire 10 Pro isn’t as tall or as wide as some handsets sporting a 5.5-inch display, but it’s still a noticeable presence in the palm, and requires two-handed operation for some tasks. It’s not overly heavy though, tipping the scales at 165g.

The phone is available in four colors: Stone Black, Royal Blue (dark blue), Valentine Lux (light blue) and Polar White, with all four options sporting gold trim for a more premium finish – although on the lighter hues this looks a little excessive.

On the back, below the sizable camera sensor, you’ll find a fingerprint scanner that provides a secure, easy way to unlock your handset – although we don’t like the fact that it can’t be reached when the device is lying screen-side-up on our desk.

Still, this is the first time HTC has put a digit reader on a Desire phone, so the fact that it’s there at all is a good thing.

And for all those audio fans out there still reeling from the news that Apple has removed the headphone jack on the iPhone 7 and 7 Plus, the good news is that HTC has kept it for the Desire 10 Pro.

The company has even applied its BoomSound enhancement technology to the jack, giving you better audio when listening via headphones, although you won’t get those enhancements when using the internal speakers – for that you’ll need the Pro’s sibling, the HTC Desire 10 Lifestyle.

The HTC Desire 10 Pro features a 5.5-inch 1080p display, which is bright and clear – ensuring videos and games look great. Colors aren’t quite as vibrant as we’ve seen on Samsung’s Super AMOLED panels, but you’re unlikely to have any issues day-to-day.

HTC has packed plenty of power into the Desire 10 Pro, with an octa-core chip at its heart capably supported by either 3GB or 4GB of RAM, depending on whether you opt for the 32GB or 64GB model.

It’s unlikely that you’ll see both models available in your market, but don’t be downhearted if you ‘only’ get the 3GB/32GB variant, as it will still pack a punch. There’s a microSD slot too, allowing you to build on the internal space with cards up to 2TB in size.

Even the lower-spec version of the Desire 10 Pro should be able to handle the latest games and applications from the Play Store, while Google’s Android Marshmallow operating system runs smoothly.

The Desire 10 Pro features the same Sense interface overlay as the HTC 10, allowing you to customize your home screens with various themes and stickers for a truly personal touch.

The Desire 10 Pro has the best camera HTC has ever put on a Desire handset – to be precise, it’s got the same camera as the HTC One M9.

That means you’re looking at a 20MP snapper with an f/2.2 aperture, HDR and two-tone flash. In one respect the 10 Pro even betters the M9’s camera, as it adds laser autofocus. This should translate into bright, clear and in-focus shots, and strong performance in low light – although the camera is unlikely to match the snapper on the HTC 10.

During our brief hands-on time with the Desire 10 Pro the camera was quick, and results serviceable – although the device we were using wasn’t running final software, so we can expect some fine-tuning between now and when the phone launches in October.

HTC has also redesigned its Pro Mode on the camera – an upgrade not even the HTC 10 has at the moment – with a trio of default settings including Macro and Sports, helping you tweak the various settings in an easier to understand way.

This is great for those still trying to get their heads around white balance, shutter speed and exposure values.

Around the front there’s a 13MP camera, which boasts an HDR mode and a selfie panorama mode, allowing you to get even more buddies into your shots – that’s a far higher megapixel count than the front snapper on the 5MP HTC 10.

The HTC Desire 10 Pro comes with a 3000mAh non-removable battery, which HTC claims will give you up to eight hours of internet use over Wi-Fi, 11 hours of HD video playback, or up to 53 hours of audio playback.

We fully expect the Desire 10 Pro to last a full day in general usage then, and there’s fast charging for when it runs low – but you’ll have to wait for our in-depth review to find out for sure if the battery can go the distance.

HTC’s Desire range has been a little wayward in the past couple of years, but with the Desire 10 Pro the firm looks to have a promising mid-range phone on its hands.

There’s loads of great tech packed into the surprisingly premium polycarbonate body, and as long as HTC can keep the price of the Desire 10 Pro reasonable it’s a phone we’re really excited about fully reviewing.