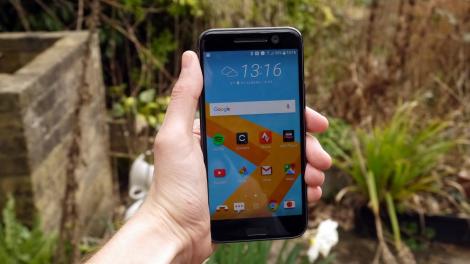 There’s always a palatable sense of excitement when one of the big players in the smartphone world brings out its latest flagship, and HTC is no different.

We’ve been hearing word of the HTC 10 for a while, and it almost seems tired to question whether this is the ‘last roll of the dice’ or whether it’s an ‘ailing’ smartphone brand – HTC is still making decent phones and trying, at least, to stick to its roots.

The new naming convention is odd though – although HTC wouldn’t confirm it to me, as there wasn’t a definite answer to the question of whether the One brand is over. The idea of going to just 10 was based on ‘the perfect 10’, the ultimate in scores, the best of achievement.

Does that mean that this is the last ever phone from HTC then? (Of course not. Who else wants to bet we’ll hear something about ‘turning it up to 11’ in 2017?)

Alright – so that’s the stage set, but what’s the initial impression of the HTC 10? In a word: chunky. That’s not necessarily a criticism though, as HTC has never been one for making ultra-slim flagship phones.

HTC’s new tagline is ‘Sculpted by Light’, telling the world that this is a phone that captures the light and reflects it beautifully. And yes, placed face down on a table it does have a nice gleam, but the wider chamfered edges don’t really add a huge amount to the mix, making it feel larger in the hand.

It’s very well-made though, and the amount of high-end components stuffed in here signal that HTC is at least hitting the right marks in terms of making a flagship phone with some power.

That said, I can’t say I get the same excited feeling I did the first time I slipped the HTC One M8 into my hand, the mixture of curved back and sleek aluminum telling me I was in the presence of a really rather special phone.

Don’t get me wrong, this is a superbly crafted handset. The 2.5D glass on the side is curved nicely into the body, the whole chassis has an intensely powerful feel to it and even dropping the logo on the front is going to please some fans.

Check out our hands on video review:

(I say that, but the reason so many were annoyed at the logo was that it added depth to the phone, where it seems all HTC has done is take the letters off – there’s still a blank space where a small logo could have been added.)

The fingerprint sensor, which doubles as a home button, is the same as seen on the One A9, not clicking but providing rapid response. It’s flanked by two capacitive buttons which make it much easier to navigate through the phone, rather than having to flick open the on-screen options as it seems Google would rather have us do in native Android.

One of the big things that HTC is talking up with the 10 is that it’s worked with Google to make a more integrated approach to the user interface, taking the Material design to strip everything back and removing the amount of duplicate apps on offer.

This is all designed to be something that brings out the best in the phone, with the word ‘tuning’ being mentioned multiple times in the briefing.

Things certainly seem stripped back though, and while it has the same Sense look and feel to the phone – BlinkFeed is still there on the left of the home screen, although it seems a bit more chaotic than before, and the menu and notifications bar still have a distinctly HTC look and feel to them.

One of the things HTC is most proud of is the improved speed of the touch display, where it maintains it now has a faster response than anything on the market – including the iPhone 6S, which Apple has worked hard on making hugely fluid to the touch.

I have to admit, I didn’t notice that much of a speed improvement under the finger – whether this is something that will bear out in the final review I don’t know, but I was hoping for something hugely palpable when experiencing this touch display.

That’s not to say it’s not rapid – with the Qualcomm Snapdragon 820 chipset running the show, it was always going to be superbly smooth, and opening and shutting apps largely seemed to be impossible to fault – the only ever so slight pause came when opening the clock from cold, and that was only because I was opening and shutting apps at random to try and see if I could make it fail.

The addition of the Snapdragon 820 is one that I’m watching with interest – the 810 didn’t have the best of times in the phones it inhabited, thanks to some overheating problems. The brand maintains it’s utterly solved the problem, and with HTC having popped a larger 3000mAh battery into the mix, as well as tuning (there it is again) the power management, there’s a chance this could actually be a phone from the Taiwanese brand that has better than ‘distinctly average’ battery life.

Combined with the QuickCharge 3.0 compatibility and FINALLY a charger that supports the standard in the box, this phone will juice up quickly, despite not going down the wireless charging route. Apparently it’ll juice up to a day’s use in just 30 minutes – which will be a good claim to test.

I can’t work out whether it’s just that I’m getting used to seeing phones with this resolution, but it didn’t wow me instantly. It’s sharp, clear, bright and colorful, but perhaps I’m just too impressed by the oversaturated colors of the Samsung Galaxy S7 range, or the improved contrast ratio that offers. It’s a brilliant display and a fellow journalist’s tests on the power of it, comparing brightness levels and color reproduction, showed it to be technically very able.

One of the things that did very much impress me was the effort HTC’s put into audio on this phone. It’s insane the level of power that’s gone into this handset, with the dual speaker set up back once again.

However, it’s a bit different here, as the sound has been separated into higher and bass levels, the ‘tweeter’ and ‘woofer’ channels pulled apart to give more richness and clarity to the sound. This means the iconic speaker grilles above and below the phone are gone, with the speakers now firing out the bottom and earpiece of the phone.

It’s an odd effect. It’s loud and has a certain level of bass I’m not used to hearing from phone speakers but I don’t feel like it’s amazing – and oddly enough, not the same impressive level I’ve been used to from One phones of the past.

But when you put the headphones on, my word. The HTC 10 suddenly comes to life. This is where the tuning really comes into play, with insane levels of bass combined with clarity in the vocals… it’s just so powerful.

That could be because I was using the bundled high resolution sound headphones, but then again, so should you as HTC has decided to chuck some decent buds into each box to make sure everyone has access to the great sound. I only had a brief time to test the music on board, but I can’t wait to rev up Spotify on this phone to see if my ‘average’ tracks sound as good.

The other improvement HTC is crowing about with the 10 is the camera, which has been improved by dropping the pixel count from 20MP to 12MP – curiously in line with what Samsung and Apple are doing, no?

I say that’s curious, but what those brands have proven is that this is the sweet spot, the area where resolution and technical ability meet with the best results, so it makes sense for HTC to join them at this intersection.

Early snaps with the 12MP camera were OK. The light levels seemed a bit erratic and I struggled to get the autofocus to sharpen things up instantly, but on the whole everything seemed bright and sharp.

Perhaps, again, it’s because I’m coming from the Galaxy S7 Edge, which has a simply superb camera. Maybe it’s because the HTC 10’s photos don’t ‘pop’ as well on the screen, instead going for a higher level of technical ability.

There’s no doubt HTC believes in this sensor, showing off that the 10 got the joint highest ever DxOMark for a phone snapper, making it able to claim it’s one of the best cameras in a smartphone – the exact statement Sony made with it’s Xperia Z5 line up, and those pictures weren’t great.

However, HTC does have some cards to play here. It has RAW support and if the brand’s late-2015 One A9 is anything to go by, those photos combined with some enhancement will be stunning – I’m already looking forward to trying this thing out properly.

That said, it makes me worry for the day to day average shot, which needs to be fast, fluid and beautiful – here’s hoping HTC, with this new UltraPixel 2 camera (designed for brilliant low-light shots) makes it big in the camera world again.

When browsing those photos, you won’t be using HTC’s gallery app this time, with Google Photos the new method of getting hold of all your images. The brand had to work with Google to enable RAW support here, but it’s done so – and I’ll be intrigued to see how that goes down with the fanbase.

Something that’s bound to impress is the addition of Apple’s AirPlay support – this could be huge if Apple TV really takes off. You can now stream to any Apple-powered speaker set up, and although HTC was being cagey about the deal and wouldn’t give any information, you’d have to expect that this was at least discussed with Apple and should stick around for a while.

I won’t lie to you – the first time I clapped eyes on this phone I wasn’t massively impressed. It doesn’t scream out with its own identity, and the chamfered edges feel a little too thick.

The stripping back of Sense to allow Google more room to roam about the phone’s operating system seems a bit defeatist too, and while it’s high spec, the HTC 10 doesn’t necessarily have anything that will amaze with its innovation.

There’s no waterproofing, no curved screen, no pressure sensitive display. If someone asks what’s so special about it, I’d be hard pushed to give a definite answer.

But even in my early look with the phone, it’s clear HTC’s been hard at work at the basics. The screen is upgraded, the battery life has been looked at and the camera properly thought out – and that audio output through headphones is mega.

Perhaps HTC has finally woken up and realized that when it had the tagline ‘Quietly Brilliant’ it actually had the blueprint for your new favorite phone – but it still needs to shout about it if the review finds that it’s got an amazing handset to make noise over.