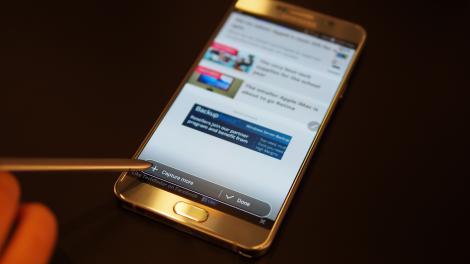 The Samsung Galaxy Note 4 remains a solid phablet that boasts a powerful display and powerful innards stuffed inside that can even run a Gear VR virtual reality headset without issue. Aside from its high cost and large size, the handset received a 4.5 rating.

Touted as the ultimate productivity powerhouse, the Note 5 has been slimmed down without sacrificing an impressive array of specs and new software features.

Samsung hasn’t announced global availability just yet but you can pick up the Note 5 in the US on August 21, with pre-orders beginning August 13. Pricing will vary and depend on the following carriers: AT&T, Sprint, T-Mobile, US Cellular and Verizon Wireless.

The videos and pictures are vibrant thanks to the Note 5’s 5.7-inch Super AMOLED display with QHD 2560 x 1440 resolution (518ppi), equalling the size of the Note 4’s screen though the pixel density is lower on the older device.

Samsung designed the Note 5 to be less unwieldy by incorporating curved side edges on the back panel. I have tiny hands and there’s no denying the fact that phablets will never be comfortable for me to hold, but I did notice it was a bit easier to grasp the Note 5.

Its measurements of 153.2 x 76.1 x 7.6mm and 171g weight – which is both slimmer and lighter than the Note 4 – probably helps with the bulkiness. Again, despite the seemingly marginal number differences, there’s a clear distinction when holding the phones – I could see the thinner design and surprisingly, feel the difference in weight.

There wasn’t enough time during my demo to really stress test the Note 5’s capabilities by running games or apps but YouTube and web pages loaded quickly despite the hotel’s bad Wi-Fi.

The battery also hasn’t been tested, of course, but at 3,000mAh it’s smaller than the Note 4’s 3220mAh. But Samsung believes it’s got that covered. With Power Saving and Ultra power saving modes, even if the Note 5 has 10% battery life remaining, it should still allow a substantial amount of standby time.

The charging has been upgraded to mirror the Galaxy S6’s wireless charging abilities (with both PMA and Qi standards supported) and will charge rather quickly thanks to the more efficient technology.

The Samsung Galaxy Note 5 will come in two colors: Black Sapphire and White Pearl. It’s also far sleeker than I expected despite it being a larger, productivity-centric mobile device. (The Note 5 is pictured with a Galaxy S6 Edge+ below).

Placed next to the Galaxy Note 4, it looks positively radiant thanks to its slightly curved edges and lack of plastic and textured backing.

The S-Pen – one of the key features of the Note series – is also back and slightly different from the Note 4 iteration. Instead of pulling the pen out, you push it into the chassis and it clicks out. It’s easier to access and makes more sense than its previous method. Once the pen is in hand, you can also immediately jot down notes on the Note 5 screen without needing to open any extra apps.

Software-wise, the S Pen use is all about making it easier to write stuff on the screen, as you’d expect. For instance it’ll save your notes automatically and “Air Command” (the little box of options that appears whenever the pen is brought close to the screen) has been enhanced as well with an always on icon for the S-Pen.

Shortcuts to frequently used apps will be easier to find from any screen and there will be fewer steps to start writing. The latency and friction have been lowered to allow a better writing experience as well.

I’ve never had problems with the S-Pen on the Note 4 in terms of writing so it was difficult for me to discern between the two when doodling on the both at the event.

Scroll Capture is one of the new functions of the S-Pen that will allow you to screen capture a whole page. Whether it’s directions from Google Maps or a web page, you can use Scroll Capture one of the Pen’s apps to continuously capture and save content, even if it’s not all on one page. The feature itself is a bit hard to find since it’s not explicitly labeled in the phone.

It seems particularly useful if you’re traveling without access to Wi-Fi – simply use Scroll Capture to save a page, then pull up the info when you need it. You’ll also be able to annotate the screens.

I’ve always wanted a feature like this on my phone so it’s great to see it come to fruition. It makes it easier to save important info instead of needing to take 10 screenshots just for one web page. My only peeve was with the constant tapping to use Scroll Cap. I’d much rather just hold the Pen down to capture the screen.

PDFs will also be easier to work with. To make it easier to deal with PDF documents, new software has been included to let you open a PDF, sign it or annotate, then send immediately.

Like the Samsung Galaxy S6 and S6 Edge, the Note 5 has Samsung Pay incorporated allowing you to pay with NFC and MST – Near Field Communication and Magnetic Secure Transmission, respectively.

There are three quick steps to use the payment method. Whether your phone is on or off, you swipe up, verify your identity with your fingerprint, then place the Note 5 on the magnetic card reader to scan.

Samsung Pay should be more widely accepted compared to Apple Pay and won’t require vendors to purchase another machine to scan your gadgets. Rather, you simply place the Note 5 up to standard card readers already used in stores. It then registers a digitized token account number – not your live account – that is processed by the card company’s servers, then authorized for the payments to go through.

You won’t have to worry about choosing how to pay either. Samsung reps said that the card readers will automatically detect the “purest signal” between NFC or MST when paying.

It worked well enough during the demo but may be different in practice. The Samsung Pay beta is available now, and will be ready commercially on September 20 where it will be accepted in stores worldwide.

Sidesync has been around for awhile but has been updated to include syncing with Macs as well as Windows. The demo worked really well over a USB connection and I was told in theory, should work just as well over Wi-Fi since the hotel’s connection was extremely spotty.

Basically, you’d be able to transfer your pictures, videos and even show off YouTube videos in high quality just by connecting to your to your PC or tablet.

The rear camera remains largely the same as the Note 4 at 16MP with optical image stabilization, although it’s been given new features and power to make it into something more attractive.

RAW support is now included (something all the camera fans out there will love, although why it’s been added into something like the Note is unclear, given it’s not really something people will buy the phone for) and live streaming, where private YouTube channels will be created so you can share what you’re doing with friends in real time.

Through the camera app, you’ll be able to start live video broadcasts that are immediately shown on your YouTube channel, in real time. Similar to Periscope sending out a tweet to your followers notifying them you’ve started live streaming, you’ll be able to let friends know through social media when to tune in.

The front-facing snapper has been vastly upgraded for the selfie types. receiving a boost up to 5MP.

The Note 5 also feature 4K video filming which can be displayed on a 4K TV.

Samsung says music should be fuller and richer through headphones. During my demo, switching from normal to UHQ definitely made a difference. It doesn’t seem to work without headphones though and it’s not clear if UHQ is for music only or for all multimedia. Bluetooth has been enhanced to 24bit/96kHz as well to improve music quality for the speakers and headsets.

The Note 5 is a worthy successor that’s quite capable of surpassing the Note 4 with its less clunky design and improved features.

Though there aren’t too many new goodies that truly separate the 5 from the 4, it’s still clear Samsung attempted to include better software to improve productivity.

Immediately being able to write while cutting out the need to open an app after popping out the S-Pen stands out the most to me, however simple it may sound.

Live streaming to YouTube is an integration I didn’t see coming for the Note 5 but could be a potential hit. I suppose it’s Samsung’s equivalent and answer to the iPhone 6 Plus – and everyone’s uploading videos of cats to YouTube these days.

From my short time with it, the Note 5 looks like a decent alternative for those looking for a lovely display and powerful handset. Pricing is still in the works and dependent on the carriers but should fall within range of the Note 4’s off-contract $800, £600 (around AU$960). Let’s just say the Samsung Galaxy Note 5 won’t be cheap because it wasn’t cheaply made.