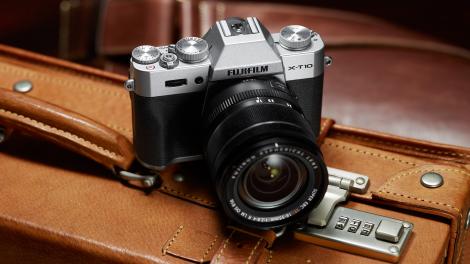 There are some great compact system or mirrorless cameras around at the moment, but because of its solid build, retro SLR-like styling, traditional controls and excellent image quality the Fuji X-T1 is one of our favourites. We’re not alone in this, it’s also proved very popular amongst enthusiast and professional photographers looking for a smaller (and funkier) alternative to an SLR.

Now Fuji has announced the X-T10, a slightly more compact mini-me of the X-T1 that uses the same APS-C format 16Mp X Trans CMOS II sensor and EXR Processor – also found in the Fuji X-E2 and Fuji X100T. This sensor also houses phase detection autofocusing points that make up part of the camera’s hybrid AF system which Fuji claims has a focus time of just 0.06 seconds.

Being a little smaller and more affordable than the X-T1 naturally means that the X-T10 makes a few compromises. One of these is with the electronic viewfinder (EVF) and although the X-T10’s viewfinder has the same 2.36-million dot resolution as the X-T1’s, it’s the smaller device that’s found in the Fuji X-E2 with 0.62x magnification rather than 0.77x. The smaller size of this EVF means that it’s not possible to see a dual image, with a magnified view alongside the full image, as it is with the X-T1. However, like the X-T1’s EVF, there’s a lag time of just 0.005 seconds rather than the 0.05 seconds.

One area where Fuji hasn’t compromised, however, is with the X-T10’s autofocus system as it has the updates that were recently announced for the X-T1. In single AF (AF-S) mode there are three options for setting the focus point; Single, Zone and Wide, and in continuous AF (C-AF) mode there are Single, Zone and Wide/Tracking. In Wide/Tracking mode the camera selects the autofocus point automatically and then tracks the subject around the frame, switching AF point and adjusting focus distance as it moves.

Other specification highlights of the X-T10 include a pop-up flash in addition to a hotshoe, a native sensitivity range of ISO 200-6400 with JPEG-only expansion settings taking this to ISO 100-51,200, a UHS-I SD/SDHC/SDXC card slot (the X-T1 has a UHS-II slot), Wi-Fi connectivity and the same electronic shutter as is found in the X100T and X-T1 giving shutter speeds up to 1/32,000sec. To help less experienced photographers, there’s also a fully automatic mode.

While it doesn’t have the weather resistant build of the X-T1, like other X-series CSCs, the X-T10 is still very nicely put together with a pleasantly solid, die-cast magnesium alloy construction. It looks and feels like a high quality piece of kit and a proper member of the X-series family.

The front and rear grips are also less pronounced, but thanks in part to their super-grippy covering, they still work very well and the camera feels safe and comfortable in your hand.

Over on the left of the top-plate, where the X-T1 has a dial to set sensitivity, is a drive mode dial. In addition to providing a means of setting the camera to Single, Continuous Low (speed) and Continuous High (speed) shooting (up to 8 frames per second) this has options for accessing the bracketing, Advanced Filter (there are two settings for this), Multiple exposure and Panorama modes. There are two bracketing options, one for exposure bracketing and another for Film Simulation bracketing to allow you to produce a sequence of three images with different exposures or different Film Simulation settings.

There’s no sensitivity dial on the X-T10, but there are a number of ways of selecting the ISO setting you want. The first option is via the main menu, but there’s also the Quick menu that’s accessed by pressing the Q button. Alternatively, one of the physical controls can be customised to access sensitivity values. The front dial, which by default is used to access the autofocus options, could be a good option. Pressing this dial brings up the available settings, then it can be rotated to select the correct value. Or instead, sensitivity can be set automatically by the camera. I find this a very good option because you can set a default ISO value as well as a maximum sensitivity and minimum shutter speed, so you can be confident images won’t be too noisy or suffer from camera shake.

A small switch protruding from underneath the drive mode dial is provided to pop-up the built-in flash. This little flash seems tougher than the flimsy devices on some cameras and its pop-up spring is quite strong.

In a desire to help less experienced photographers, or when speed is of the essence, Fuji has given the X-T10 a switch to allow users to override the exposure settings and set the camera to fully-automatic mode. This switch sticks out from under the shutter speed dial, near the power switch but it’s unlikely that the two would be confused.

Although the electronic viewfinder (EVF) is noticeably smaller than the X-T1’s, it is still very good. When the camera was set to the Provia/Standard Film Simulation mode, our pre-production sample showed the very slight boost in contrast and saturation in comparison with the scene that we expect to see with this setting. Details are clear and there’s no obvious texture in good lighting conditions. In low light some noise becomes apparent, but it’s not objectionable.

The 3-inch screen is also very good, displaying plenty of detail in all but very bright light when reflections make the EVF a better option for composing images. The fact that the screen tilts up or down is useful for composing landscape shots from high or low angles, but it doesn’t help with upright format shots. Because the EVF eye cup extends a little beyond the back of the camera, the screen can’t be tilted completely upright for viewing from in-front to help with selfies. You can always connect the camera to your smart phone and use Fuji’s app to control it remotely to get a self-portrait.

In Zone AF mode the X-T10 has 77 user-selectable autofocus points (rather than the 49 available in Single AF mode) and these can be selected in groups of 3×3, 3×5 or 5×5. By default the AF point selection mode is activated by pressing the down key of the navigation controls on the back of the camera and the size of the AF zone is adjusted using the front or rear command dial above the thumb and finger grips. The location is shifted via the navigation controls.

So far I’ve only seen a pre-production sample of the X-T10 and we’re not allowed to publish any images from it. However, you only need to follow the link to the Fuji X-T1’s review to get a good idea of what the image quality will be like because it uses the same sensor and processing engine.

Because its X Trans CMOS II sensor design doesn’t require an anti-aliasing filter, the X-T1 is able to capture more sharp detail than comparable 16MP cameras and I expect that to be the case with the X-T10.

Fuji is widely respected for its colour reproduction and the Film Simulation modes are very popular. My favourite is Classic Chrome, which produces quite muted colours with a warm tone, but the standard option, Provia is a good all-rounder, while Velvia is great for creating images with more saturation.

As mentioned earlier, Fuji has given the X-T10 the updated autofocus system that will come to the X-T1 in a firmware upgrade available in June. I haven’t been able to test this extensively with the pre-production sample X-T10, but my initial impressions are very good. In Single AF mode it is fast even in quite low light and in Continuous Wide/Tracking mode it seems to do a good job of locking onto a moving subject and tracking it around the frame. I’m looking forward to testing this fully when we get a final sample camera.

It’s also helpful that, like the new Fuji X-A2, the new Auto Macro function automatically activates Macro mode when close subjects are detected, so there’s no need for a macro button.

Fuji X-series compact system cameras tend to produce JPEG images with quite high mid tone contrast, which makes them look sharp, vibrant and film-like, but means that their dynamic range isn’t especially high. My time with a pre-production sample X-T10 indicates that it will be the same. We can also expect the raw files to have a greater range of tones than the JPEGs.

When we’ve tested Fuji X-series CSCs in the past we’ve found that we get significantly better results in our lab when we process our target chart images in Adobe Camera Raw (ACR) rather than the supplied SilkyPix, so it will be interesting to see this is still the case once we get a full-production sample in for testing and ACR is updated to be compatible.

The big challenge for manufacturers when introducing a camera beneath an existing model is to give the new model appeal without wiping out the attraction of the original camera. I think Fuji has done a remarkably good job with the X-T10. Its price is attractive, and significantly lower than the current street price of the X-T1, yet the overall build and feel of the new camera is very similar.

Apart from the price, the main differences between the X-T10 and the X-T1 are the lack of weatherproofing, the smaller electronic viewfinder and the loss of the sensitivity dial. As the traditional exposure controls are still present, along with many of the features of the X-T1 (not least the sensor and processing engines), there’s still plenty to offer enthusiast photographers. Meanwhile novices get a bit more help with a more obvious route to the drive modes and a fully automatic override switch that puts the camera in control of exposure, white balance and colour.

Although it doesn’t have the weatherproof sealing of the X-T1, the X-T10 feels very solid and has delightful retro charm. This is combined with a high-quality viewfinder and what looks to be a capable autofocus system (though we need to test this properly to be sure).

The X-T10 promises to be a great camera for those wanting to get more serious about their photography, or a useful back-up camera for pros and serious enthusiasts with an X-T1.