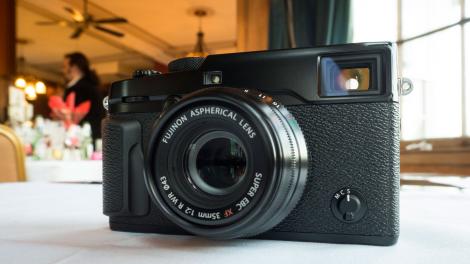 The Fuji X-Pro1, launched in January 2012, was Fuji’s first compact system camera. And although the size and pixel count of its sensor may not have been unusual at the time, APS-C format with 16.3 million effective pixels, its design was out of the ordinary.

Following in the footsteps of the company’s first X-series compact cameras, the X100 and X10, the X-Pro1’s sensor eschewed the standard Bayer filter pattern of red, green, green, blue (RGGB) over the photosites. Instead it used an X-Trans CMOS chip with a 6×6 RGGB filter array with a random arrangement of filter colours within each block of 36.

The benefit of this design is that no anti-aliasing filter is required to avoid moiré patterning – the interference that is sometimes seen when the fine structure of a sensor clashes with fine repeating patterns and textures within a scene. The benefit of omitting the filter is that images are a little sharper, with more detail.

The results from the X-Pro1 were very impressive, it captured images with a level of detail not far off that from full-frame SLRs available at the time of its launch with an attractive film-like quality. This and the rangefinder-style design with hybrid viewfinder that combines an optical finder with an electronic one, plus the traditional exposure controls, made the X-Pro1 a major success.

Now after four years, during which we’ve seen the arrival of the Fuji X-E1, X-E2, X-T1, X-T10, X-M1, X-A1 and X-A2, we at last have the X-Pro2 – the replacement for the X-Pro1. And while Takashi Ueno, Fuji’s Device and Electronic Imaging Products Manager may refer to the new camera as an evolution of the X-Pro1, there are quite a few new or improved features to get excited about.

I got to try an early sample of the X-Pro2 a few weeks before its announcement. Although I haven’t been able to examine any shots that I took with it, I’m in Japan for the camera’s announcement and with luck we’ll be able to add a few photos to this hands-on preview over the next few days. Let’s take a look at what the new camera has to offer.

Kicking off with the most important aspects, the sensor and processing engine in the X-Pro2 are both new. The sensor is a 24Mp X-Trans CMOS III device designed following the same principles as the chip in the X-Pro1, while the Dual Cortex A processor is dubbed X-processor Pro.

This combination brings improved low-light capability and over 2x faster read-out speed for better autofocusing and subject tracking as well as a more responsive electronic viewfinder and a maximum continuous shooting rate of 8fps (frames per second).

It’s also possible to record video (Full HD, not 4K) as well as stills. Image processing is claimed to be 4x faster and a new focal plane shutter enables a maximum shutter speed of 1/8000sec with a maximum flash sync speed of 1/250 sec. The new shutter is claimed to be quieter and produce less vibration than the X-Pro1’s. It also has a duration (life expectancy) of 150,000 cycles.

Sensitivity may be set in the native range ISO 200-12,800, with a JPEG-only expansion setting of ISO 100 and raw file expansion settings up to ISO 51,000. I’m sure the lack of raw file shooting at ISO 100 will be a disappointment to some.

The X-Pro1’s Hybrid Multi Viewfinder was a popular sales point and it’s been updated to an Advanced Hybrid Multi Viewfinder (AHMVF) with internal dioptre adjustment. As before, this brings the advantages of an optical finder (a bright natural view regardless of the lens, no time lag, bright frames to see the framing at different focal lengths without changing lens and the ability to see around the area that will be captured) with those of an electronic viewfinder (the impact of camera settings and bokeh effect are visible), allowing you to switch between one and the other.

The X-Pro2’s electronic viewfinder is the same 0.48-inch 2.36-million dot device as in the X-T1, which is good news. It also has a maximum frame rate of 85fps (frames per second) in High Performance mode (more on this later).

As with the X100T, it’s possible to show a small live view image in a corner of the optical viewfinder and this can be enlarged to aid focusing. Meanwhile, the electronic viewfinder has two depth of field display options: Pixel and Film. The Film options show a larger scale, making it easier to assess which areas will be sharp.

As usual there’s a 3-inch LCD on the back of the X-Pro2 and with 1.62 million dots, it’s the highest resolution model on an X-series camera. It’s a fixed unit rather than tilting or articulating and it’s not touch-sensitive.

Fuji has been working hard on improving the autofocus performance of its compact system cameras and the X-Pro2 takes on-board the benefits of recent developments with an expansion in the phase detection area and a new algorithm for faster, more accurate focusing plus Tracking AF and Zone AF modes. There are 77 autofocus points in standard mode, including 49 phase detection points, but this can be increased to 273 points with 169 phase detection points. This is an area we’ll be exploring in some depth in the near future.

Another significant change brought by the X-Pro2 is the addition of a second SD card slot, a first for X-series cameras and only the second time in a mirrorless camera (the Leica SL being the first). The second card can be used as an overflow, a back-up or to allow raw and JPEG images to be stored separately.

Fuji has given the X-Pro2 three power management options; Economy, Standard and High performance. In High performance mode the camera delivers its maximum autofocus performance as well as the highest EVF frame rate (85fps) and resolution, but the quoted battery life is just 210 shots. In standard mode the EVF frame rate is 54fps and battery life rises to 250 shots. Meanwhile, in Economy mode the battery last for 330 shots but the EVF frame rate is low and the resolution is 3000×1000 dots. We’ll investigate this further when we get a production sample in for testing.

As Takashi Ueno is keen to point out, the X-Pro2 is an evolution of the X-Pro1 and while there are a few changes to the control layout, the new camera has the same rangefinder-like styling and the transition from the older camera should be easy for existing users.

Whereas the X-Pro1 was made from three pieces of moulded magnesium alloy, the X-Pro2 is made from four with the bottom plate now being made separately. The new camera is also weatherproof, like the X-T1, and is complemented by Fuji’s growing range of WR (weather resistant) lenses.

The overall shape of the X-Pro2 is the same as the X-Pro1, but the shallow front and rear grips are edged with a rubber-like material which gives a bit more purchase. And although the Quick Menu and Autofocus lock buttons are still on the ridge of the rear grip they seem a little less prone to being pressed accidentally.

Sticking with the top-plate, the exposure compensation dial is in the familiar place just above the thumbrest, but its range of adjustment has been extended to +/-3EV (it’s +/-2EV on the X-Pro1) and there’s a new C option that is used to expand the range to +/-5EV.

The back of the camera sees one of the most significant changes brought by the X-Pro2, the introduction of a mini-joystick controller that’s specifically designed for selecting autofocus (AF) point, but can also be used for navigating the menu and making setting selections. I think this is a great addition as it can speed up selecting the right AF point, making the camera more responsive. It’s something I expect Fuji will include on the X-T2 when it updates the X-T1.

Other changes in comparison with the X-Pro1 include the buttons on the left of the screen being moved, with the Drive mode options now being accessed via the up navigation button. In addition, the auto exposure lock (AEL) and autofocus lock (AF-L) buttons have been split across two controls making life a bit easier.

Fuji has made changes to its menu system for the X-Pro2, with six tabs running vertically down the screen and the number of lines in each screen has been raised from 7 to 8. There’s also a My Menu screen (hurray!) to which you can assign up to 16 of your most commonly used features for quicker access. On the whole the menu system looks clearer and easier to read.

At the time of writing I’ve only handled the X-Pro2 for a few minutes, but I’m in Japan for the launch event and hope to be able to use it more and update this preview with further findings. My initial impressions of the handling, however, are very good. The new viewfinder is excellent, with useful improvements made to the optical element. It’s also quick and easy to switch between the various viewing options using the small lever on the front of the camera.

With the introduction of a new sensor and processing engine the quality of the images from the X-Pro2 is a largely unknown quantity. Fuji has shown me a collection of prints made from X-Pro2 images, with comparable shots from a range of other compact system cameras and SLRs and they compare very well – but then Fuji wouldn’t show me them if they didn’t.

An initial assessment indicates that the new camera produces very natural looking results without over-sharpening or excessive noise at up to ISO 6400. As we would expect given the jump in pixel count since the X-Pro1, there’s also an increase in the amount of detail visible. However, we won’t be able to get the full story until we have a full production sample in for testing and we’re able to investigate the image quality properly.

While the X-Pro2 isn’t really designed to be a sports photographers camera, it will be interesting to see what progress Fuji has made with the focusing system.

The X-Pro2 has been one of the most eagerly awaited cameras of recent times and my initial impressions suggest that it won’t disappoint. Fuji has opted for a sensible pixel count of 24 million that promises to give photographers a nice compromise between image size and file size as well as detail capture and noise control.

The manufacturer has also stuck with what many people love about the X-Pro1, the rangefinder-like design and the hybrid viewfinder that allows users to choose between an optical or an electronic finder and switch between the two at moment’s notice. The control layout is familiar, but changed a little from the X-Pro1’s. I’ve not used the camera for long enough to comment fully yet, but the control layout seems good and an improvement upon what went before. I’m especially pleased to see the mini-joystick controller on the back of the camera as this speeds up AF point selection. The redesigned menu and the arrival of a customisable My Menu screen are also a step forward.

There’s been a bit of confusion about the position of the X-T1 relative to the X-Pro series and this has now been clarified. The Fuji compact or mirrorless system camera range is split into two lines with the rangefinder-like X-Pro2 and X-E2S in one and the SLR-esque X-T1 and X-T10 in the other. The X-T1 and X-Pro2 are both aimed at experienced photographers but offer a choice of two styles and handling arrangements.