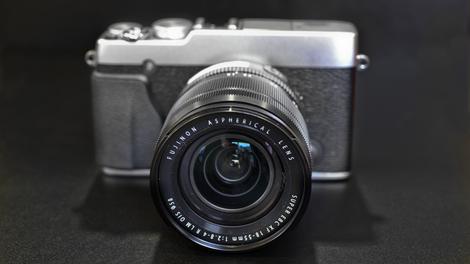 Just a few months after the Fuji X-Pro1 launch, Fujifilm has managed to squeeze its class-leading tech into a smaller body.

Fuji has enjoyed great success with its X series of premium cameras. The Fuji X-Pro1 marked the company’s return to interchangeable lens cameras ever since it bowed out of the DSLR market in 2006.

Widely praised by critics and the audience, the Fuji X-Pro1’s sensor is comparable to some full-frame sensors in our lab tests, and the images it produces are fantastic. 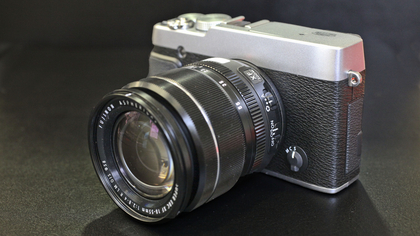 By comparison, Fuji says that the X-E1 will retail for significantly less and will include the brand new premium 18-55 f/2.8 – f/4 Fujinon lens. 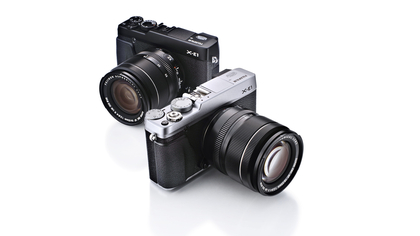 Another big criticism of the Fuji X-Pro1 was its autofocusing speed, which could be pretty sluggish at times. Fuji was well aware of this issue, and has now issued a firmware upgrade for the X-Pro1, which solves that problem.

This version of the firmware is found on the Fuji X-E1. Fuji claims that with the new 18-55mm lens this enables focusing speeds of 0.1 seconds. 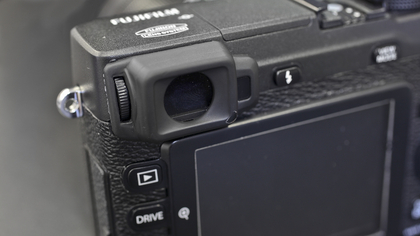 Many of the specs of the Fuji X-E1 are shared with its older brother. Crucially, it has the same 16 megapixel APS-C X-Trans CMOS sensor and the same processor. Image quality should, therefore, be exactly the same.

Technology adapted from analogue film has been used to create the sensor, which features a unique colour filter arrangement to produce low-noise images even at high ISO settings. 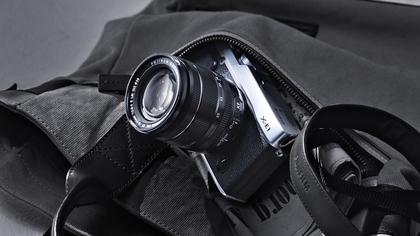 Unlike the Fuji X-Pro1, though, the Fuji X-E1 doesn’t use a hybrid optical and electronic viewfinder, instead relying on an electronic device only. With 2.36 million dots, this is comparable to the Sony NEX-7, and is one of the brightest EVFs currently on the market.

Available in two colours, Fuji’s designers say that the X-E1 has been designed with two different kinds of photographers in mind. The all-black version is thought to be appealing to discreet street shooters, while the silver and black version – with its retro-style body – is designed with more image-conscious users in mind.

With a lower price, the Fujifilm X-E1 is a more direct competitor of the Sony NEX-7 and Olympus OM-D.

Fuji’s designers have once again done an excellent job with the Fuji X-E1, producing an extremely attractive body design that packs some serious photographic punch.

The body size is roughly the same as the Fuji FinePix X100, the company’s premium compact camera. Despite the smaller size, lenses attached to the front of the camera don’t look odd – as is prone to happening with compact system cameras.

Although the Fuji X-E1 is smaller than the Fuji X-Pro1, it’s still not a pocketable camera. It also retains a good weight to give it the same air of premium quality as its older sibling. A textured grip around the front of the camera is present, which is helpful, especially when using the camera one-handed.Fuji has also introduced an additional grip which can be attached to the camera if you require even more bulk. 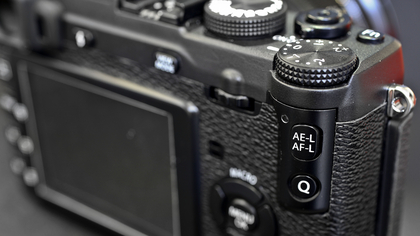 Featuring only an electronic viewfinder (rather than the hybrid device as found on the Fuji X-Pro1) enables the top of the camera to be much more streamlined than its older brother.

Many of the same dials and buttons that are on the Fuji X-Pro1 can be found here on the Fuji X-E1 too. You have the same shutter speed dial and mode dial on the top plate of the camera. Aperture can be set via the lens itself, with all X lenses (including the new 18-55mm kit lens) featuring an aperture ring.It’s worth noting that all of the prime lenses feature markings to denote the aperture, but since the maximum aperture changes throughout the zoom range, the 18-55mm lens doesn’t feature these markings. 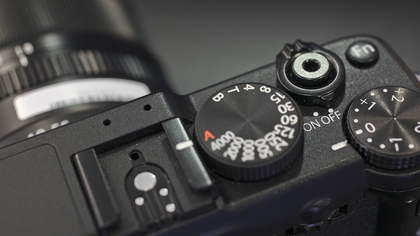 The same Q button as found on the Fuji X-Pro1 makes an appearance here as well, giving quick access to a number of most commonly used camera settings, such as sensitivity and film simulation modes.

As with the Fuji X-Pro1, an eye-sensor to the side of the Fuji X-E1’s EVF detects when the camera is lifted to the eye, automatically switching between the LCD screen and the EVF. 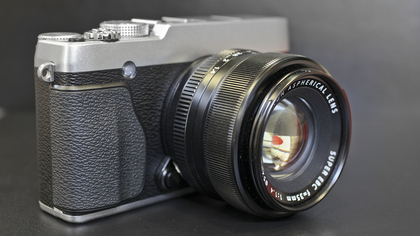 The EVF has a soft resin on the eyepiece, which is especially useful for glasses wearers, while a dioptre dial enables you to adjust the distance between your eye and the EVF for a viewing position which best suits you.

The eye sensor reacts well and quickly, while a good angle of view from the eyepiece can be enjoyed – you don’t need to be welded against it to see the display, and neither does it switch too soon as to be annoying. 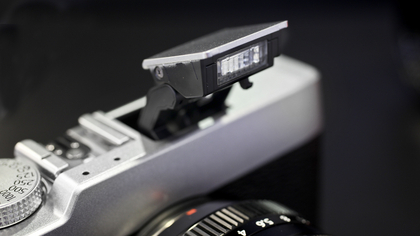 Anyone already familiar with the Fuji X-Pro1 will also be at home with the menu system onboard the Fuji X-E1, since it seems nearly identical.

We will explore it in our full Fuji X-E1 review, coming as soon as we get a full production sample of the camera.

It’s difficult to fully assess performance until we are able to put the camera through our labs or properly examine images shot with the Fuji X-E1.

However, in this case, because the CSC uses the exact same sensor and processor as the Fuji X-Pro1 we feel fairly confident in assuming that image quality will be on a par. 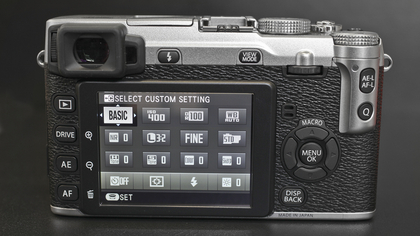 Our lab tests of the Fuji X-Pro1 show that the camera is able to compete with full-frame DSLR cameras in terms of noise and dynamic range, so we fully expect this to be the same case for the Fuji X-E1. 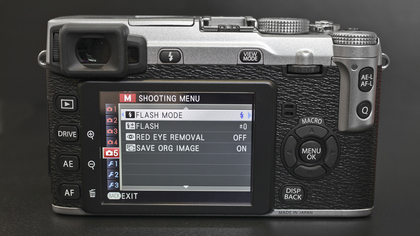 Real world testing of the Fuji X-Pro1 have also been favourable, with bright, clear and vibrant images being produced. 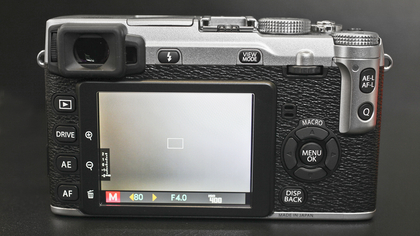 Autofocus speed is something Fuji was keen to work on, following feedback from the Fuji X-Pro1. Both the cameras are now capable of focusing in as little as 0.1 seconds, thanks to new firmware. 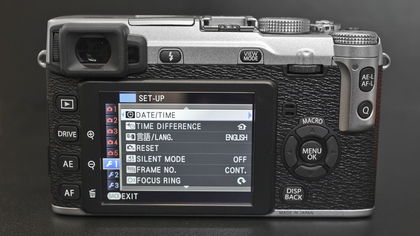 Using the pre-production sample we had access to seems to confirm that speeds have been significantly improved, but we’ll directly compare the two firmware versions and test the Fuji X-E1 in real world situations more when we receive a full review sample for testing. 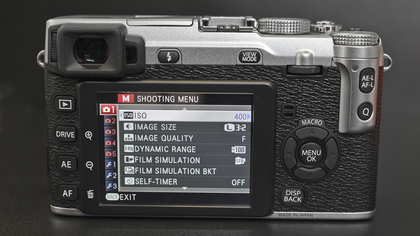 It’s worth noting that the new speeds are only guaranteed when using the new 18-55mm f/2.8 kit lens. 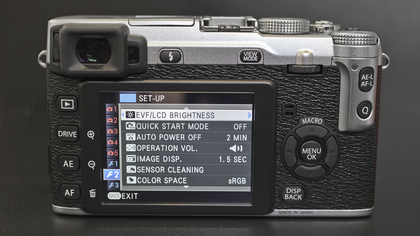 Although some will be disappointed by a single electronic viewfinder, rather than the combined hybrid device of the Fuji X-Pro1, the EVF on the Fuji X-E1 is very good. 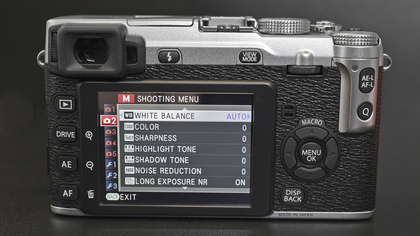 With a 2.36 million-dot resolution, this is one of the highest resolution devices on the market, and it feels very comfortable to use. It’s worth remembering that using the optical viewfinder on the Fuji X-Pro1 can lead to misfocusing, something that isn’t possible with the electronic viewfinder, where what you see is what you get. 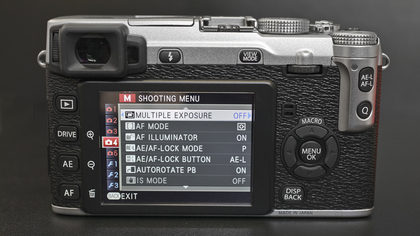 By contrast, the 460k-dot resolution LCD screen on the back of the camera is a little disappointing. It would have been nice to also see a high resolution device here, but it does perform well in the limited conditions we were able to test it out in. Again, this is something we’ll look at more closely in our full Fuji X-E1 review. 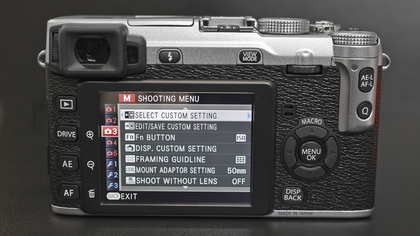 The new firmware also improves the focusing distance of the camera, enabling closer focusing without needing to switch to macro mode. Again, this was something that seems to work well after our limited time with the Fuji X-E1, and something we’re keen to test more thoroughly soon. 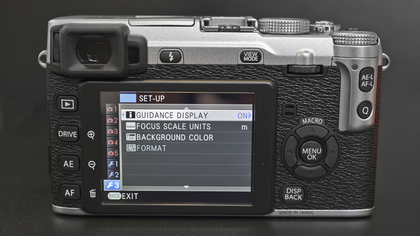 Overall, the Fuji X-E1 is an extremely interesting proposition that we can see being incredibly successful.

Combining the fantastic technology of the Fuji X-Pro1 with a more consumer-friendly price and a smaller, more streamlined body will surely appeal to a wide range of people.

Adding a new 18-55mm kit lens to the lineup of the X range is also a smart move, which will again appeal to a new crowd. The fact that the lens has a metal build and a wide f/2.8 aperture should also mean that it wins favour with existing X series users, and should allay fears of a drop in performance that is usually associated with kit optics.

The premium end of the compact system camera market is now looking extremely interesting. This new camera competes much more closely with the Olympus OM-D and Sony NEX-7 than the Fuji X-Pro1 was able to. As such, other manufacturers are likely to carefully watch Fuji’s proposition.

Currently, Nikon and Canon don’t have anything in this niche segment of the market, while Panasonic’s cameras sit just underneath it. It’ll be interesting to see if any responses (particularly at the upcoming Photokina 2012 show) are forthcoming.

We’re very much looking forward to putting the camera through its paces properly when a review sample becomes available for testing, but for now we’re once again very impressed by what Fuji has delivered.