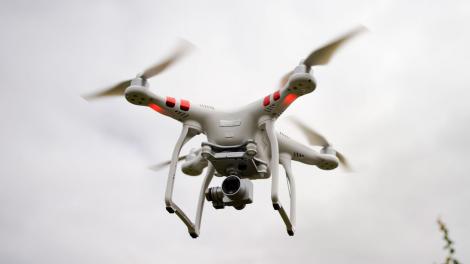 DJI Innovations is the company that leads the consumer Multirotor (Drone) market with the successful Phantom range. The Phantom’s success comes from its approach, offering a ready built, calibrated and ready to fly craft direct from the box. It was also the first to offer a simple GoPro mount on the base enabling you to film incredible bird’s eye footage.

Successive releases have built on this simple design and ease of use and the Phantom has grown hugely in popularity amongst photographers and filmmakers as the go-to craft to capture video and stills, now its major selling point.

The Standard model joins the latest line-up of Phantom 3 models and features a 2.7K camera capable of capturing both video and stills, live view streaming to a mobile device, intelligent flight controller and over 20 minutes of flight time.

It’s designed as a lower-cost alternative to the Phantom 3 Advanced and Phantom 3 Professional and DJI says it should be on sale on August 9th at US$799 (about £512/AU$1,085).

The Professional and Advanced Phantoms are very similar with the only difference between the two being the camera. However, while the Standard model looks almost identical there are some major differences.

The Standard, as with the rest of the range, comes equipped with a camera mounted on a motorised gimbal. The camera features a 1/2.3-inch, 12 million pixel sensor that is capable of capturing 2.7K video at 30fps, 1080p at 48 fps or 720p at 60fps. The ability to capture 2.7K video puts it slightly ahead of the next model up in one respect, but the Advanced can shoot 1080p at a higher frame rate of 60fps, which will be more appealing to the higher end videographer.

The lens is a fixed f/2.8 with a 94 degree field of view, which is a 20mm equivalent lens in 35mm terms. This lens helps to avoid the fisheye distorted look that is synonymous with cameras of this size and instead gives a pleasing distortion free image.

The camera offers a selection of modes and settings enabling you to shoot both video and stills in a Program or Manual mode. These settings can all be adjusted through the DJI Go app. Adjustments include an ISO range of 100-3200 (video) 100-1600 (photo), electronic shutter speeds of 8s – 1/8000s and a choice of resolution resolution. We’ll bring you the full scope of adjustments, both manual and automatic, in the full review.

The new Standard is quite a different craft to the Professional and Advanced models, despite having many similarities. The style and overall design remains much the same and as with the other two models the spacing of the landing gear has been widened in order to avoid it appearing in your footage. The battery is the same new 4480 mAH 15.2 v LiPo which in our hands on test gave just over 20 minutes of flight. The camera and gimbal also look the same but there is a difference in camera recording sizes and output – like the other models, the camera takes a MicroSD card to store those video and stills files. The difference between this and the other two models visually is subtle but the major differences are in the technology.

Visually the motors are all positioned upright in line with earlier models, rather than the slight tilt that we’ve seen in the Professional and Advanced Phantoms. This tilt makes a small but noticeable difference to stability so it’s a shame not to see it here.

The technology is where the major differences lie, with live view streaming from craft to mobile device using WiFi rather than DJI’s lightbridge technology, so connection and streaming isn’t at quite as high a quality or as smooth by comparison, but it’s by no means bad.

The two positioning cameras under the Pro and Advanced model are gone too, so this means that if you’re flying indoors or without GPS then you’ll lose the added control and stability that these two cameras offer.

These features are outstanding features even on the Professional and Advanced models, though, so they would have been remarkable on this entry level model.

One of the big advantages of the new Phantom 3 Pro and Advanced models is the ability to smoothly stream footage direct from camera to a compatible mobile device using DJI’s own Lightbridge technology.

Video streaming was possible through the Phantom 2 Vision Plus through a WiFi connection but in order to use it properly an additional signal booster was required. The Phantom 3 Standard will use a similar WiFi system to the Vision Plus rather than the Lightbridge technology used by the other two Phantom 3 models, but in use it works incredibly well and the old booster that had to be attached to the controller has gone – the booster strength inside the controller and craft produces a signal strength strong enough to provide a decent stream.

The sensor and lens may be small but they produce superb, crisp quality footage that captures plenty of tone and detail. The ability to adjust the exposure and sensitivity enables plenty of creative control.

Looking through our test footage far shows the video is rich in colour and tone, and the lens and sensor combination captures a good sharp image across the frame. Paused footage does show signs of detail and tonal graduation loss, but no more than you’d expect from any other camera of this size.

The remote controller is similar to the one supplied with the older Phantom 2, and features two sticks to control the throttle, rotation and tilt of the craft. There are also two switches on the left and right, S1 and S2, and depending on the mode and status of the craft these are used for configuration and automatic home recall. There is also a dial on the left to control the gimbal’s tilt either up or down – but no direct control to operate the camera.

The Standard model is far more reliant on the app than the other two Phantom 3 models for the basic operation of the camera because start stop recording cannot be activated either directly on the camera or through the controller.

Once the DJI Go app has been downloaded the connection process is shown on the interface. The Phantom 3 appears directly in the WiFi devices list of your mobile device and once it’s selected and the app re-opened, clicking the ‘Enter Camera View’ button launches the app interface and the LiveView starts.

Even over a WiFi connection the quality of the feed is surprisingly good and although there is pixelation in the footage it still gives you a really good idea of the composition and exposure. The delay between real events and what appears on screen is a fraction of a second, far better than you’d expect from the majority of action cameras that offer a similar feature. The range of the WiFi link is limited compared with the Lightbridge connection of the other two Phantom 3 models but is still impressive; in an open space we managed a good 200m with only minimal dropout.

The app gives you direct access to the camera settings. Both video and stills have Program or Manual modes and here you can adjust the exposure compensation in Program mode and ISO and Shutter Speed in Manual.

Once you’ve selected the setting you want, the red shutter button on the interface can be clicked to start and stop recording. Once recording has commenced a small red light on the camera indicates that recording has started. Further settings can be changed in the camera settings section with access to resolution and file formats. In stills mode this gives you the option to shoot in either JPG or RAW.

The Phantom 3 Standard may be the entry level model, but it offers everything that the videographer or photographer could want when starting out. The simple design and operation make it incredible easy to fly, and the ability to control settings along with a reliable live view stream make it easy to compose and adjust exposure in order to easily capture the footage you want. The Standard model misses out on some of the features available in the Professional and Advanced models but that doesn’t lessen the fun and usefulness of this small craft.

If you’re where toying with the idea of buying a Phantom Professional or Advanced but put off by the price, the Standard could be the deciding factor. There is nothing else on the market that is as easy to use and boasts such high quality footage at this or even twice the price.