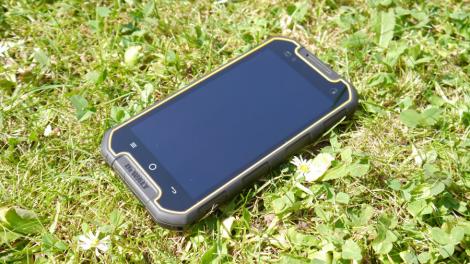 As the iPhone 7 looms, there seems to be a real fear that the global smartphone market has reached its peak when it comes to innovation and opportunities to sell.

Sure, every new generation is faster than the previous one, has more memory and a camera with more megapixels, but in the grander scheme of things, all that’s rather ‘meh’.

That doesn’t mean that consumers don’t want to buy a phone, it’s just that often they haven’t found one that is different enough for them to fork out their hard-earned cash.

Which is where rugged smartphones such as the BlackView BV6000, the Cat S60 and the Dewalt MD501, which we are testing today, can capture a small but not-so-insignificant audience (the above and below images show these three handsets next to each other).

That audience is trade professionals and businesses looking for a smartphone that can resist a few knocks, and they don’t mind paying extra for a device that doesn’t get obliterated when it falls from your hand and hits a hard surface four feet below.

The MD501, like the two other rugged smartphones mentioned, destroys the myth usually associated with this category of devices: that they are expensive but also ugly and have poor specs.

Sure, DeWalt’s flagship handset is not what we’d call affordable – at about £440 (around $580, AU$770) – but think about it more as an investment, and also consider the fact that you don’t have to buy an expensive accidental damage insurance policy.

Obviously the phone is not manufactured by DeWalt but by an unknown licensee through a company called Global Mobile Communications Limited – a common enough practice in this area (Cat phones and JCB phones are both built by the Bullitt group).

Out of the box the device looks solid. Like the competition, its outer shell is made of a black reinforced rubber chassis with a couple of flaps that hide the microUSB port and an audio socket.

There’s an etched, barely visible logo on the front along with capacitive touch buttons, and a reasonably big, glove-friendly, 5-inch display with Gorilla Glass 3 capable of displaying 1280 x 720 pixels. The display is reasonably bright, and you also get a 5-megapixel front camera and a useful status LED.

At the back there’s a 13-megapixel camera with dual LED flash and a cover that hides two SIM cards and a microSD card reader.

A big programmable yellow button can be found on the left-hand side of the MD501 while a dedicated camera button, a power button and volume ones are on the opposite side.

At 245g and with a 14mm thickness, this device is heavy and sizable but then that’s what you’d expect from a smartphone and a bundled casing.

The MD501 matches the competition’s adherence to the IP68 set of tests as well as the stringent MIL-STD 810G. That means that it can withstand drops of up to two metres on concrete, stay under water at two metres for 30 minutes, and it is, of course, fully resistant to the ravages of dust as well as water.

Oh, and add in the ability to work between temperatures of minus 20 degrees and 60 degrees. Which means that it won’t be harmed should you leave it on a dashboard in broad daylight on a hot summer’s day.

When it comes to the hardware, the MD501 lags behind the competition when it comes to sheer performance. Its score of 31,360 on Antutu is decent but far less than either of its aforementioned competitors.

That’s due to its processor which is not only slower but also has fewer cores. With 2GB of RAM and 16GB on-board storage, it is also found wanting compared to its biggest competitor, the S60 from Cat.

The rest of the configuration includes a series of sensors (Gyroscope, pressure, magnetic, light and range), GPS, AGPS, GLONASS (but not Beidou), an amplified speaker, a 3,950mAh battery, 802.11n Wi-Fi, Bluetooth 4.0, Qi wireless charging, an FM radio and NFC.

Surprisingly, the MD501 runs Android 5.1 Lollipop rather than 6.0 Marshmallow. That update is expected to come very soon according to DeWalt, but this is nonetheless a bother for those who want, for example, to benefit from the unified storage function.

The DeWalt MD501 is far too expensive for what it offers. The hardware itself can be found on handsets costing less than £100, which means that the extra toughening has quadrupled its price.

In comparison, the Cat S60 is a far more powerful handset with more memory and storage, plus it has a thermal imaging camera, Android 6.0, and can go deeper underwater.

And we’ve not even compared this offering to the BV6000 which costs around a third of the price while providing a better set of hardware. DeWalt will need to significantly up the ante in order to catch up with the competition.