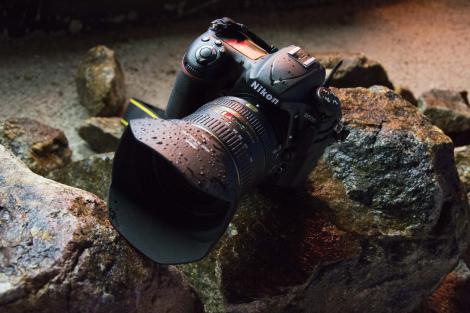 I had a hunch that Nikon would have something more enthusiast focused than the D5 up its sleeve at CES, and I wondered if it might be the D400, the fabled replacement for the D300S. Well the name might have changed to sit more comfortably alongside the company’s new top-end full-framer, but make no mistake, the D500 is the camera that many Nikon users have been holding out for.

The D500 sits at the top of Nikon’s APS-C (DX) format SLRs and it’s aimed at serious enthusiast and professional photographers who want a smaller, lighter camera than a full-frame model like the D810 or D5. It’s also designed for pros who want the focal length magnification of the DX format sensor to give their telephoto lenses greater reach.

One surprise about the D500 is that its APS-C format sensor has 20.9 million effective pixels, less than the company’s other recent (24Mp) SLRs of the same format. Interestingly the D5 announced at the same time has 20.8 million pixels on its full-frame sensor. I’m told that the two cameras use the same sensor architecture, built to Nikon’s specification.

There are several other similarities between the two new cameras which make the D500 an exciting proposition. The EXPEED 5 processing engine is the same, as is the 153-point Multi-CAM 20K autofocus (AF) system with 99 cross-type points. And, like the D5, the AF central point is sensitive down to -4EV while all the other points are sensitive down to -3EV, potentially making it useful in very low light. The processing engine also brings a maximum continuous shooting rate of 10 frames per second (the D5 can hit 12fps) for up to 200 14-bit lossless compressed raw files, as well as the ability to record 4K UHD movies. It adds up to a pretty enticing package for sports photographers.

Having the same pixel count as the D5 but on a smaller sensor means that the D500’s photo receptors are smaller. This naturally has an effect on their light gathering power and low light performance. Consequently the D500 doesn’t have quite the same crazy sensitivity range as the D5 – its standard range is ISO 100-51,200 and there are five expansion settings taking it up to the equivalent of ISO 1,640,000 – a stop lower than the D5’s crazy maximum. That’s still an incredibly high figure.

Whereas the D5’s 4K shooting capability is limited to 3 minutes it’s possible to shoot 4K UHD (3840 x 2160) 30p/25p/24p video for up to 29 min 59sec with the D500. As usual, there are lower resolution video modes and full HD footage can be shot in 60p for slow motion playback. In addition, 4K UHD time-lapse movies can be created in-camera and there’s electronic Vibration Reduction to reduce the impact of camera shake when shooting movies hand-held.

Like the D5, the D500 has a 3.2-inch 2,359,000-dot screen that’s touch-sensitive. Unlike the D5, however, this can be used to set the AF point – the D5’s is limited to use when reviewing images and inputting text for copyright information etc.

Another aspect that distinguishes the D500 from the D5 is the presence of Nikon’s new SnapBridge technology which allows the camera to stay permanently linked to a smart device by a low-power Bluetooth connection (or via Wi-Fi). It means that after the first connection has been made, images can be transferred automatically to your phone whenever you shoot and they should be ready to be shared via the Internet when you pick up your phone.

As befits a camera aimed at professional and serious enthusiasts, the D500 has two card slots, one accepts SD type media while the other is for the faster XQD cards. Although they’ve been around for quite some time, XQD cards haven’t become commonplace yet with most cameras accepting SD-type media. This could be set to change.

While the D500 doesn’t have a full metal body like the D5, its metal chassis is more durable than the D300S’s. The degree of sealing is also greater so the camera can be used in harsher conditions. Nikon has also omitted a pop-up flash to make the camera sturdier, and the hotshoe is supplied with a weatherproof seal to protect it when a flashgun isn’t in use.

The camera certainly feels solid and durable, without having the weight of its full-frame sibling. On the front there’s a decent grip with a textured coating and a ridge on the back marks the thumb-rest, making for a comfortable holding experience. It was raining for part of the time that I used the D500 and although the grips got wet, the camera still felt very secure in my hand.

All the direct controls that you would expect are present along with a ridged mini-joystick controller for selecting the AF point quickly when the camera is held to your eye. This control sits just to the left of the natural resting position for your thumb on the back of the camera and it’s within easy reach. A little lower down is the familiar rocker-style navigation pad with central button for scrolling through the menu and making setting selections.

It’s worth noting at this point that settings can’t be selected, nor the menu navigated using the screen’s touch-control. However, as mentioned earlier, it is possible to input text (for example for copyright information) set AF point or scroll through and zoom into images with taps and swipes on the screen. The screen is responsive and it would be nice to have the option to use it a bit more than Nikon has allowed.

Still on the subject of the screen, its high resolution means that images are very sharp and there’s plenty of detail visible. The tilting bracket is one of the most rugged feeling that I have used and it has clearly been made with durability in mind.

As the D500 is an SLR it has an optical viewfinder and as usual with a high-end camera, Nikon has opted for a pentaprism version for the D500 rather than the ‘pentamirror’ design used on some cheaper cameras. This provides a 100% field of view when shooting on DX format or 98% when shooting with the 1.3x magnification option selected. The view is nice and bright and when shooting at the maximum frame rate the blackout time is very brief, so it’s very easy to keep up with fast moving subjects.

When you’re shooting at 10fps it’s quite obvious that the D500 has a mirror that must lift before a shot can be taken because the vibration is apparent against your face as you hold it to your eye . A little more damping wouldn’t go amiss.

On the basis of my experience shooting with a pre-production sample of the D500, sports and action photographers are unlikely to be disappointed by its autofocus performance – it’s very fast and seems accurate. I say ‘seems accurate’ because I haven’t been permitted to keep any of the images that I shot with it or examine them other than on the back of the camera. However, it adjusted focus quickly when shooting a quad biker in bad light and the images looked sharp on the back of the camera.

The camera did a good job of tracking the movement in the various focus modes and coped well with very low and flat lighting conditions, but naturally I want to investigate this area in much more depth when we get a full production sample in for testing.

Nikon also seems to have improved the contrast detection AF system that operates when the camera is in live view or video mode. Even in quite low light I found it quicker and smoother than the systems in Nikon’s other DX format cameras. It’s not as fast as the phase detection system that operates when images are composed in the viewfinder, or as fast as the best systems in compact system cameras, but it’s good and my first impressions are that it would be practical to use when the camera is hand-held. Manual focus is still likely to be the preferred option for video shooters though.

Again, bearing in mind that so far I’ve only been able to check images on the screen on the camera and that I was using a pre-production sample, the low light performance looks good within the native sensitivity range. Images shots at Hi 1 (ISO 102,400) also look very impressive, but I failed to get any acceptable images at the top sensitivity setting, Hi5 or ISO 1,640,000. However, the fact that Nikon wouldn’t let any journalists keep any of the images shot on the cameras available at the launch event indicates that the image quality is not yet finalised and there could be significant changes before the camera comes to market.

Obviously we’ll need to test a full-production sample thoroughly to give a final verdict, but the D500’s white balance and metering system didn’t throw up any unpleasant surprises when I was using it the confines of an artificially-lit meeting room, outside under a heavily overcast sky or in a dark and gloomy gold mine.

One area of the D500 that I haven’t been able to explore yet is its SnapBridge technology. We’ll have to wait for the appropriate iOS and Android apps to come along.

While some may be a little disappointed that the D500 doesn’t have 24 million pixels on its sensor like Nikon’s other recent DX format SLRs, the rest of its specification is very impressive and it’s likely to prove particularly attractive to sports and action photographers. The autofocus system is particularly enticing and the early indications are that it is very good, capable of getting moving subjects sharp in difficult lighting conditions.

While I’m yet to be convinced that the top sensitivity expansion setting is worthwhile, noise appears to be controlled well throughout the native sensitivity range (ISO 100-51,200) and even the results at ISO 102,400 look pretty decent – at least on the back of the camera.

It would be easy to dismiss SnapBridge as another small step in the move towards a more connected world, but I think it could actually be a significant one. In order for this to be the case it needs to prove feasible to keep your camera and phone connected, and the image transfer options will have to allow you to have all the images you want on your phone without clogging up the memory too quickly or flattening either the camera or the phone battery. If these requirements are met, and Nikon is claiming that they will be, then photographers may find that they rarely feel the need to shoot on their phones ‘because it’s easier when you want to share an image’.