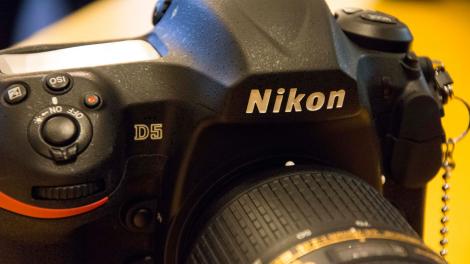 Nikon announced a few weeks back that the D5 was in development to replace the D4S, the company’s flagship SLR aimed at professional photojournalists and sports photographers. With the Olympic games arriving this summer it was odds on that we’d see something concrete at CES. Sure enough, Nikon obliged and revealed the new 20.8Mp full-frame model at the show in Las Vegas.

Few in the press conference could claim to not be surprised by the new camera’s top expanded sensitivity setting of ISO 3,280,000 or a little over three million (actually 280,000 is quite a lot in ISO terms, never mind the 3 million in front). This begs the obvious question, is it usable? More on this later.

Of course the real reason for this huge hike in sensitivity is the work done to improve image quality and noise control at the more commonly used settings and within the native range of ISO 100-102,400. According to Dirk Jasper, Product Manager for Nikon Europe, the main target for image quality improvement with the D5 was the ISO 6400 to 12,800 range as these values are most commonly demanded by professional sport and news photographers.

Another area that’s incredibly important to the D5’s target audience is the autofocus (AF) system. Nikon has also upped the ante in here, giving the new camera a 153-point system that has 99 cross-type sensors with a central point that’s sensitive down to -4EV. Of these 153 points, 55 or 15 are individually selectable – the rest are support points – and the cross type points extend further to the edges of the frame than in past cameras. The system maybe set to operate in single-point, 25-, 72- or 153-point dynamic-area AF, 3D tracking, group-area AF or auto-area AF mode.

There’s also a new ASIC (computer) unit that’s dedicated to the AF system to ensure consistently high performance. The AF ‘workflow’ and tracking systems have also been improved to keep up with fast moving subjects.

Of course a fast AF system needs to be paired with fast continuous shooting capability and thanks to the EXPEED 5 processing engine the D5 can shoot at up to 12 frames per second (fps). What’s more, this can be maintained for up to 200 raw files when writing to an XQD card, giving plenty of scope for recording Usain Bolt’s efforts this summer.

The ability to record 4K (3840×2160 pixel) video was expected for the D5, but surprisingly it’s only capable of recording a maximum of three minutes internally. While this is sufficient in many situations there are just as many when it is not. As yet we haven’t had an explanation for this limitation, but the most likely one is to avoid overheating. This certainly had an impact on the continuous shooting burst depth of the D4S.

Some better news about the 4K recording, however, is that it’s possible to employ a native crop so there’s no pixel binning, giving better image quality. There’s also an HDMI output to enable external recording.

It’s worth mentioning at this point that there are two varieties of the D5, one that has two CompactFlash (CF) card slots and one that uses XQD cards. Those wanting to get the maximum burst depth will need to opt for the QXD model – according to Dirk, the burst depth is cut roughly in half when writing to a CF card.

Like the D500, the D5 has a 180,000-pixel RGB metering sensor that also helps inform the white balance, scene recognition and AF system.

Anyone with a D4S will feel at home with the D5 as the control layout has been kept the same. The dual grips on the front and rear of the camera, however, are more ergonomically shaped to make the camera more comfortable to use for long periods of time. It certainly felt good in my hand during the couple of hours that I used it during a Nikon press event.

Like the D4S, the D5 feels like it would be safe to use in the toughest of environments, having a full metal body and extensive weather-sealing. There’s even a weatherproof cover for the hotshoe to keep the contacts dry if there’s not a flashgun in place.

Naturally one of the first things that I checked out with the D5 was the 12fps continuous shooting. With a burst depth of 200 images you can keep the shutter button depressed for a little over 16.5 seconds, which is more than enough for most events – including the 100m final this summer. Although the D5 isn’t as loud as some SLRs when shooting continuously, I was aware of the mirror movements going on inside thanks to a tapping sensation on my forehead as I shot looking through the viewfinder.

The memory card bay of the pre-production D5 I was using was taped up to prevent it from being opened, but the buffer cleared very quickly so I’m pretty sure it had XQD cards inside.

While the D5’s 3.2-inch 2,359,000-dot screen is touch-sensitive, it doesn’t make much use of the touch control – it’s mainly for scrolling through images and zooming in to check sharpness. It works intuitively with taps, swipes and pinch-zooming and responds promptly. It’s not possible to navigate the menu, make settings selections or set AF point by touching the screen.

Not surprisingly, given the high dot count of the screen, images look great on it and it’s easy to check sharpness.

Although I have been able to shoot with a pre-production sample of the D5, I wasn’t allowed to keep any of the images or examine them on a computer monitor, so the comments here are based on an assessment of a selection of shots on the camera’s screen.

The Olympic games and the UEFA Euro finals are key venues for the target market for the D5, so it’s essential that autofocus system is top-notch. We’ll need to test this in an extensive range of situations and conditions before we can give a final verdict, but my initial impressions are that it is very good and capable of keeping pace with a fast moving subject in flat, relatively low light. It also managed to get stationary subjects sharp in very low light when the subject had just a hint of contrast.

The D4S has a native sensitivity range of ISO 100-25,600, but the D5 goes two stops higher (ISO 100-102,400). I haven’t been able to directly compare images yet, but from memory the D5’s results at ISO 102,400 are much better with less noise being present and more detail being visible. The results at ISO 204,800 (Hi1) also look good and those at ISO 409,600 (Hi2) are a significant improvement upon those from the D4S. Pushing beyond this produced extremely noisy results with subjects in images taken at ISO 3,280,000 (Hi5) being largely unrecognisable on the back of the camera and a strong magenta cast being visible. However, it’s worth remembering here that this camera was a pre-production sample and the image quality is not finalised.

Other aspects of image quality; exposure, white balance and colour all seem very good and inline with what we would expect from Nikon’s top-flight camera. Of course we will perform thorough tests to make sure when a full-production sample becomes available.

As well as increasing the pixel count of the D5 by 25% in comparison with the 16Mp D4S, Nikon appears to have achieved a two-stop improvement in noise control. That’s no mean feat and one that is bound to be appreciated by the photographers that line football pitches and athletics stadiums on a daily basis. As well enabling them to produce higher quality images they will be able to shoot at smaller apertures for greater depth of field when they want to, or use fast shutter speeds to freeze more movement.

These photographers will also be happy with the 12fps continuous shooting capability, as well as the flexibility that a 200 files burst depth brings. The latter may only be used on relatively rare occasions to avoid filling up hard drives and creating masses of images to sort through, but there will be times when it is useful.

The D4S’s autofocus system is excellent and it’s hard to tell after a relatively short period of use whether the D5’s is an improvement, but it is certainly very good.

The only real disappointment with the D5 is the limited 4K recording capability. It makes me wonder whether we will see another full-frame camera from the Nikon that is more video focussed. Time will tell.

I suspect the specification sheet alone is enough to convince many seasoned professional photographers to pre-order the D5 and I’m looking forward to giving it a proper test when we get a production sample.