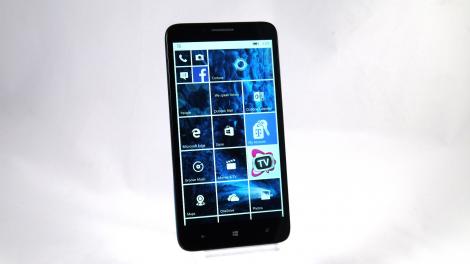 The Alcatel Fierce XL with Windows 10 Mobile won’t be a handset which sweeps the nation, rather it’ll likely only appeal to a small subset of consumers. And Alcatel is fine with that.

It’s exclusive to T-Mobile, and there are currently over one million customers on the carrier who have a Windows Phone 7 or 8 device – devices which can’t be upgraded to Microsoft’s latest software, Windows 10 Mobile.

That means there are Windows fans with handsets running old software, which is where the Fierce XL comes in.

As you may already know, Alcatel already has an Android variant of the phone under the same name out in the US – and the two handsets share a lot of the same specs, and price.

For that you get a 5.5-inch HD display, 1.1GHz quad-core processor, 2GB of RAM, 16GB of internal storage, microSD slot, 8MP rear camera and 2MP front facing camera. That’s not a bad line up of specs considering the price point.

The bright blue model I got hands on with is reminiscent of the Lumia design language, not to mention the iPhone 5C too, and it feels solid in the hand. The shiny plastic offers little in the way of grip, but it’s still pretty easy to handle even with its larger screen.

It’s a little on the chunky side at 9.6mm thick, but at least the power and volume keys on the right fall nicely under finger. At the end of the day it’s a functional design, which is what you want from a budget handset.

The quad-core processor and 2GB of RAM provide a decent slug of power, and I found Windows 10 Mobile to be smooth and responsive with good app load times.

It’s not the perfect amount of power though, as Alcatel has had to drop Microsoft’s Continuum functionality from the handset as it doesn’t have the grunt to run it.

Continuum is a feature in Windows 10 that allows you to use your phone as a Windows computer when plugged into a monitor or screen using a special dock – but you won’t be doing that with the Fierce XL.

I found the 8MP rear camera was pretty good, coping with the questionable lighting at the Alcatel stand, but the 2MP front camera is something to avoid. It’s horribly grainy, which will make your selfies suck.

If the Alcatel Fierce XL with Windows 10 Mobile takes your fancy you can pre-order it now, with stock arriving at the start of February.

For those wedded to Microsoft’s ecosystem but currently stuck on Windows Phone 7 or 8 the Fierce XL with Windows 10 Mobile is an affordable way to keep your smartphone in line with your computer and Xbox.

Those who haven’t bought into Microsoft’s world however will likely find themselves drawn to the Android variant of the handset which can boast a wider range of apps – or to a completely different brand.

The Alcatel Fierce XL with Windows 10 Mobile is only ever going to appeal to a small audience, and while it provides a solid, yet basic experience, for many it doesn’t do enough.