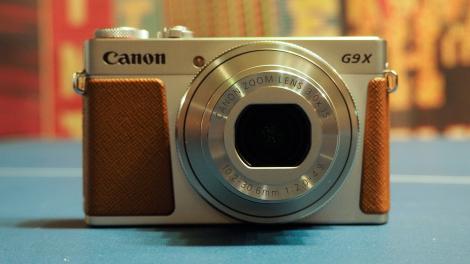 Like the G5 X launched at the same time, the G9 X has the same 20.2Mp 1-inch type back-illuminated CMOS sensor as the PowerShot G7 X, which impressed us when we tested it back in 2014. Once again this sensor is coupled with Canon’s Digic 6 processor and this combination enables a sensitivity range of ISO 125-12,800.

It means the lens isn’t quite so versatile, but it’s still suitable for capturing wide landscapes and framing flattering portraits. The smaller maximum aperture will also mean that it won’t be quite so easy to soften backgrounds and shutter speed will drop further in low light so you need to take care to avoid blur. Thankfully the lens-based image stabilization system will help with this by offering a claimed 3EV of compensation.

Another key difference between the G9 X and the G5 X is that the G9 X doesn’t have a viewfinder, nor is there a hotshoe to enable an external one to be mounted. There is, however, Wi-Fi and NFC connectivity so you can transfer images to your smartphone or cloud storage directly. You can also use Canon’s app to turn your smartphone into a remote viewfinder and controller.

The G9 X is very similar to the G7 X but Canon has managed to shrink it down by 25% and it’s actually very similar in size to the popular Canon S120, which has a much smaller 1/1.7-inch sensor. While this shrinking has had a negative impact upon the lens specification, it doesn’t seem to have impacted upon the build quality of the G9 X – it feels lovely to handle and is about the right size to slip into a shirt or jeans pocket.

Control-wise the G9 X is very straightforward. On the top-plate there’s a mode dial for setting the exposure mode, which gives a quick route to aperture priority, shutter priority, program and manual mode, along with options to access fully automatic and scene modes. There are only four control buttons on the back of the camera and the majority of settings are selected via the 3-inch 1,040,000-dot touchscreen, which provides and clear view and is very responsive. It’s pretty easy to find the options you want.

There’s also a ring around the lens on the front of the camera to adjust key settings and a sprung lever around the shutter release to zoom the lens in and out.

My initial impressions of the G9 X are very good; the lens focuses quickly even in low light, exposure seems accurate and colours pleasant. As it has the same sensor and processing engine as the G7 X we can also be reasonably confident that images will have a good level of detail and noise that’s controlled well. Naturally we will investigate all this and the lens performance when we get a production sample in for testing.

While the G9 X doesn’t have a viewfinder, it is very attractively put together, nice and small and, crucially, it has a good-sized sensor. This and its connectivity all add up to make it an appealing option for photographers who appreciate the benefit of a camera they can carry everywhere. With Wi-Fi connectivity built-in there should only be a slight delay between taking a shot and sharing it with the world via your phone.

We expect noise levels to be controlled well as the sensor and processor are also found in the G7 X – and we’re looking forward to finding out this combination works with the 28-84mm (equivalent) lens.