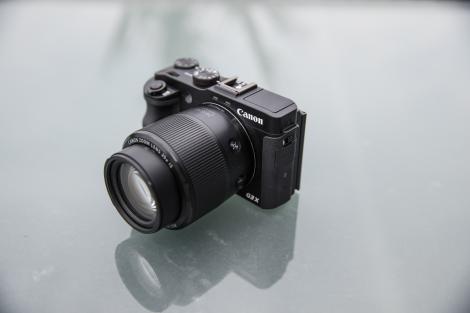 Canon’s Powershot G-series cameras are aimed at enthusiast photographers who want a compact camera with the type of control that they expect from an SLR in a smaller unit. The G3X is the latest addition to the line, slipping in between the Canon G7 X and the G1 X Mark II.

Although it has the rectangular shape that we expect with a compact camera, the new Canon Powershot G3X isn’t a huge amount smaller than some modern SLRs, but it has the equivalent of a 24-600mm lens built in.

Few photographers own a lens with that kind of reach, but it’s ideal for photographing birds, wildlife, aeroplanes and anything else that’s a long, long way away. What’s especially impressive is that the lens’s maximum aperture range is f/2.8-5.6. This means that at 600mm there’s a maximum aperture of f/5.6, larger than is usually achieved with telephoto lens and teleconverter combinations on DSLRs, so it gives greater scope for using movement-freezing shutter speeds.

Canon has made the effective focal length ‘easier’ to create by having a smaller than full-frame sensor inside the camera. However, as it has a 1-inch type sensor, the G3X still has a bigger sensor than many compact cameras on the market. It’s the same 20.2-million-pixel CMOS sensor as is found in the Canon G7X and it’s again paired with the Digic 6 processor.

Sensitivity can be set in the range ISO 100-12,800 and there’s a maximum continuous shooting rate of 5.9fps, which can continue until the SD/SDHC/SDXC card is full with JPEG files. It’s also possible to shoot raw files, and raw and JPEG files simultaneously, but Canon was unable to tell me the burst depth at the time of writing.

Naturally, it’s also possible to shoot Full HD movies and there’s a maximum frame rate of 60fps at 35Mbps. There’s full control over exposure and audio in video mode and mic and headphone sockets are provided, which makes the G3X suitable for quite serious users. Focus peaking is also on hand for those who prefer to focus manually when shooting stills or video.

Not surprisingly, Canon has given the G3X NFC and Wi-Fi connectivity and it’s possible to control the camera remotely using Canon’s free app.

Like the G7X, the G3X has little flourishes of red under some of the dials which are reminiscent of the red band on Canon’s top quality lenses. The camera also has a high quality feel, and a pleasantly textured coating on the small but ergonomic and effective grips, makes it feel comfortable and safe in your hand.

Canon has given the G3X the same level of weather and dust-proofing as its mid-range DSLRs like the Canon 70D, so it can withstand a few drops of rain and should be safe to use on a beach.

As there’s no viewfinder built-in (unless you buy the optional EVF-DC1 electronic viewfinder as used with the G1X II and EOS M3), images must be composed on the 3.2-inch 1.62million dot capacitive touch screen. I found this provides a nice clear view and responds quickly to the touch of your finger. However, subjects can be hard to follow when you’re using long focal lengths and the camera is held away from your face, so the EVF may be a good option.

The screen is a tilting device to enable easier viewing when shooting landscape format images from above or below head height. It also pops right up for easier selfie shooting.

A ring around the shutter release is used to zoom and there’s a Zoom frame assist button on the side of the lens which briefly zooms the lens out to make it easier to find the subject at long focal lengths.

A broad ring around the lens is provided for manual focusing and there’s a button the side of the barrel to switch to full-time manual focus. I found the ring moves smoothly and easily with an electronic rather than mechanical feel.

On the top-plate a high-quality dial provides a quick route to the usual exposure modes, including manual, aperture priority and shutter priority as well automated options. There’s also an exposure compensation dial with settings in one third stops running from -3 to +3EV. It has a similar high quality feel.

With adjustment dials on the back and top of the camera, settings can be adjusted quickly, but as usual Canon has made it possible to navigate the menus and make settings selections using the touch-screen. It’s all very intuitive and you find your own way of operating the camera.

Interestingly, the tripod mount on the bottom of the camera has a second hole to accommodate the pin that is sometime present on video tripod quick release plates to help lock it in place. That’s quite a nice addition, especially bearing in mind that the long lens is likely to make the camera twist on standard plates at some angles.

The Canon G7X is a cracking little compact that produces very nice images, so it’s good to know that the G3X has the same sensor and processing engine. This heritage bodes well for the exposure, white balance and noise levels of its images.

However, the lens is as yet an unknown quantity. It covers a wide range and that will have given Canon’s engineers a challenge if sharpness has been maintained into the corners throughout the zoom and aperture range. Chromatic aberration and distortion would also take some controlling. Canon says that it has used a ‘premium superzoom for professional quality’ results and this appears to be matched by the presence of a 9-blade aperture for smooth bokeh, so our expectations are high.

We’ll have to wait until we get a full production sample to find out more as I haven’t been able to examine any images from the pre-production camera that I used. I’m also keen to find out just how good the image stabilization system is, especially when the lens is zoomed all the way.

One thing that I was able to ascertain is that the autofocus system is fast and accurate, at least in bright light. We’ll test it in more challenging conditions as soon as we are able.

Although it’s considerably larger than the G7X, which shares the same sensor and processing engine, the G3X has a much more versatile lens with an impressive focal length range and a fairly large maximum aperture. This combined with the extensive yet non-complicated control could give the camera quite wide appeal.

I’d liked to have seen a lens ring like the one on the G7X to adjust features such as aperture, a vari-angle rather than a tilting screen and a viewfinder built-in to make the G3X even more versatile, but I suspect that Canon was keen to keep cost down and avoid complexity.