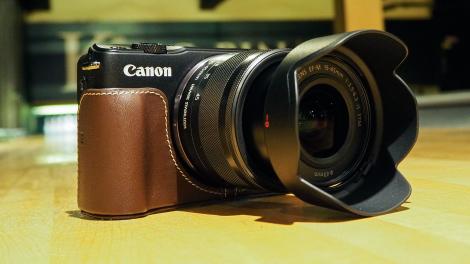 While the Canon EOS M3, which we reviewed back in May 2015, is designed to appeal to relatively experienced photographers looking for a comparatively small camera with a similar level of control to an SLR, the new EOS M10 is aimed at those who are a little newer to photography.

With that in mind, in addition to the usual collection of scene modes for shooting specific subjects it has Canon’s Creative Assist mode that enables you to take control of the camera without getting bogged down with technical or photographic terms. Helpfully, you can save preferred setting arrangements for re-use at a later date.

As you gain in understanding and confidence you can progress on to using more advanced options such as aperture priority, shutter priority and manual exposure mode.

Inside the M10 is the same 18Mp APS-C format sensor as is in the Canon 100D, the company’s smallest DSLR. This chip is coupled with a Digic 6 processing engine and sensitivity may be set in the native range of ISO 100-12,800 with an expansion setting of ISO 25,600.

Canon is nicely on-board with the move towards a connected world, and the M10 has both Wi-Fi and NFC connectivity. As well as allowing images to be transferred to a smartphone or a cloud service, the Wi-Fi system can be used to enable a phone to control the camera remotely.

Like the other EOS M cameras, the M10 doesn’t have a viewfinder built in so images must be composed on the 3-inch 1,040,000-dot touchscreen. There’s no hotshoe or connection port, so it’s not possible to connect an optional electronic viewfinder.

Canon is going to sell the M10 with a new kit lens, the EF-M 15-45mm f/3.5-6.3 IS STM. This is a collapsible lens which means it takes up less space and is easier to transport. It’s also an STM optic, which is good news for anyone interested in using the M10’s Full HD recording capability as it makes for smoother, quieter focusing.

Like other members of the EOS M line-up, the M10 feels nicely made and is economically sized given that it houses an APS-C format sensor. While the back has a small thumbpad, there’s no grip on the front of the camera, which is a slight concern. However, the camera is pretty light (at least with small optics like the new EF-M 15-45mm f/3.5-6.3 IS STM kit lens mounted) and the texture of the coating on the camera gives reasonable purchase. We’ll take a longer look at this when we get a full production sample in for testing, but for now I’d say that a wrist strap is a sensible precaution.

Like the original M, but unlike the M3, the M10 has no mode dial, so the exposure mode must be set via the screen – which is easy to do, but not quite as fast as using a dial. However, there’s an option on the shooting mode switch to set the camera to Smart Auto mode, which sets the camera to choose between 58 scene modes). That’s perfect for most beginners.

Canon has kept the number of physical controls on the M10 quite low, which makes it less intimidating. In addition to the shooting mode switch on top of the camera, there’s the power button, video record button and the shutter release, which is surrounded by a dial for making setting adjustments. Meanwhile on the back of the camera there’s just the menu and playback buttons in addition to the navigation pad, which also gives a quick route to four features (exposure compensation, flash, Information and exposure lock) and the central Q Set button.

Pressing the Menu or Q Set buttons reveals a lot more control options which are selected and adjusted via the touchscreen. Any of the options can be selected with a tap on the screen and it’s possible to swipe between menu pages, which makes finding the option you want very quick. Naturally, you can also swipe between images in review mode and set AF point with a tap on the screen.

As there’s no viewfinder the screen must be used for composing images. It provides a clear view with lots of detail in low light but as yet I haven’t been able to use it in bright conditions or to see how it performs in direct sunlight.

The sensor inside the M10 is the same as the one inside the Canon 100D so we can realistically expect images to be at least on a par with what this small DSLR produces. We can also anticipate that noise will be controlled well throughout the standard sensitivity range.

Canon’s current cameras have good white balance and metering systems, and the pre-production sample I used looked to follow suit, but we will investigate fully when we have a production sample.

In the past it has been the AF system that has hampered the EOS M series. In its original incarnation the first EOS M’s AF was slow and prone to indecision. This was significantly improved by firmware updates. The more recent EOS M3 has a focusing system that is capable of getting subjects sharp quickly. However, there were several occasions during our testing when it indicated that the subject which filled the AF area was sharp when it wasn’t. While the AF system in the early sample of the EOS M10 that I used seemed good and able to get a subject sharp in very low light, this is an area that we will pay particular attention to during our testing in the near future.

The EOS M10 looks like a nice camera for someone looking for a dedicated camera that offers more control and better image quality than a smartphone or a compact camera with a small sensor. Having an APS-C format sensor with 18 million pixels enables makes it easy to blur background creatively when you want to as well as helping to keep noise in check.

Canon has also given the camera well implemented touch controls and a sensible menu structure, plus its pedigree suggests that image quality should be high. My only reservation at this stage is whether the autofocus system can be relied upon – time and thorough testing will tell, so watch this space.