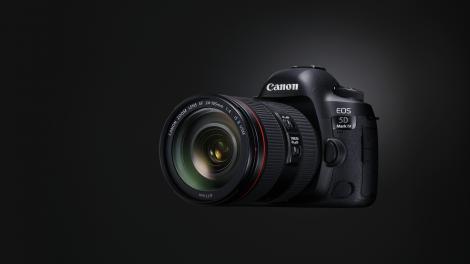 Canon’s 5D series of cameras has a rich heritage – the original EOS 5D bought full-frame photography to the masses, the Mark II unleashed Full HD video capture for the first time on a DSLR, and while the Mark III didn’t have quite the landmark features of its predecessors, its improved AF system made it one of the most complete DSLRs of recent times, loved by enthusiasts and pros alike.

Despite the range deviating a little since then, with the arrival of the 50.6MP 5DS for those wanting even more pixels, the arrival of a new generation of the 5D is a big deal.

At first glance the 5D Mark IV bares a striking resemblance to the outgoing Mark III (and for that matter the 5DS and 5DSr), and there’s a simple reason for that. In a nutshell, Canon doesn’t want existing 5D users to have to, as they say, ‘re-learn’ the new camera, and so aims to keep the transition as hassle-free as possible.

That said, there have been numerous tweaks and refinements to the body. The hand grip has been enlarged for starters, providing an even more satisfying hold, while the pentaprism now stands slightly taller to accommodate the GPS unit.

Despite cramming more tech into the body, the engineers at Canon have managed to cut the weight of the 5D Mark IV by 50g compared with the Mark III, while at the same time improving the weatherproofing, with extra grommets and seals.

The reduction in weight hasn’t compromised the overall feel of the camera; it certainly feels incredibly well put together and ready for the rigours of professional use, with a combination of magnesium alloy and polycarbonate for the body, plus a glass fibre prism cover.

While it looks a little different to the sprung lever we first saw on the EOS 7D Mark II, the 5D Mark IV now features a customisable button just underneath the joypad on the rear of the body. This can be assigned to perform a multitude of functions in conjunction with the front command dial – a useful option would be to set it to control ISO, allowing you to toggle the sensitivity without having to take your eye away from the viewfinder.

Sticking with the viewfinder for a moment, as you’d expect from a full-frame DSLR you get a large and bright display with 100% coverage, with the added benefit of Canon’s Intelligent Viewfinder II technology feeding back plenty of shooting info when the camera is raised to your eye.

The large 3.2-inch display boasts an impressive 1,620,000 dots, as we’ve recently seen with the 1D X Mark II, and like the 1D X Mark II the display on the 5D Mark IV offers a touchscreen interface. This time round though it’s active all the time, making it a much more useful and welcome addition, especially when flicking through images and checking sharpness.

Canon has also kept the same battery as the 5D Mark III, which might not seem that much of a big deal, but it’s a shrewd move, meaning that existing users looking to use both cameras in tandem don’t need two sets of batteries and chargers.

The 5D Mark IV uses both a DIGIC 6 and a DIGIC 6+ processor, with the former used solely for metering, freeing up the DIGIC 6+ processor to handle everything else. This sees the burst rate increased to a respectable 7fps, sustainable for a pretty decent 21 raw files before the buffer needs to take a breather (if you’re shooting JPEGs, the capacity is unlimited).

Coupled with this is a 61-point AF system with 41 cross-type sensors (five of which are dual cross-type for even greater accuracy). The AF system is sensitive down to -3EV (-4EV in Live View) – that’s darker than moonlight, focusing shouldn’t be an issue in poor light, while the fact that you can use lens/teleconverter combinations with a maximum aperture of f/8 and still have the luxury of all 61 AF points (21 cross-type) will be a real draw for sports and wildlife photographers.

With a virtually identical AF configuration to the flagship 1D X Mark II (Canon is at pains, though, to state that the systems aren’t completely identical, with some different internal components being used), we were very impressed with the performance of the AF in the time we had to use the camera.

Focusing, as you’d expect, was very fast, with the level of customisation and ability to tailor the AF to suit your subject very impressive. You’ll need to be prepared to spend time getting to grips with the system, but existing users of high-end EOS DSLRs should feel right at home.

The 22.3MP sensor in the 5D Mark III was starting to look a little dated compared to some of the competition, so it’s nice to see a notable jump to 30.4MP here, with the 5D Mark IV using the same latest-generation sensor technology that we’ve seen in the 1D X Mark II and 80D.

The native sensitivity runs from ISO100-32,000, and is expandable to 50-102,400. Impressive though this is, this expanded range is actually identical to the 5D Mark III’s, although Canon reckons it has enhanced the noise processing algorithm for improved results at higher sensitivities – we’ll put this claim to the test once we’ve got our review sample.

That’s not the whole story as far as image quality goes though, with the arrival of Dual Pixel Raw technology, if it does what Canon says it does, being a potential game-changer.

Why? Because it has the capacity to allow photographers to fine-tune the position of maximum sharpness. In other words, if you’ve got your focusing slightly out on a portrait and it’s not pin-sharp on the eye, you can get yourself out of jail and shift it back on to the eye. Clever stuff.

It works like this. With each pixel made up of two photodiodes, it allows for the creation of a file which contains a pair of images from two very slightly different viewpoints. You can then open the file in Canon’s Digital Photo Professional software, and use Image Micro-adjustment to shift the focus slightly; not massively, but enough to rescue an otherwise fantastic shot that would normally be consigned to the back corner of your hard drive.

As you’d expect, the file size increases dramatically, from 37MB to 67MB, but it’s a small price to pay for a pin-sharp shot you can be proud of. Again, we’ll need to get our hands on a final production sample of the camera to see for ourselves how well this works.

Canon created its own micro industry when the 5D Mark II came along with Full HD video, but the video landscape has changed quite a bit since then, with the likes of Sony and Panasonic getting their act together in this area, so it’s no surprise to see Canon fighting back with the inclusion of 4K video.

To be more precise, the 5D Mark IV features DCI 4K video capture at 4096 x 2160 pixels, at 30/25/24fps (approx 500Mbps). It also means you can extract 8.8MP JPEG images from 4K video if needed, while along with a host of Full HD options there’s also the ability to shoot 120fps HD video for some impressive slow-mo movies.

As you’d expect there are headphone and microphone inputs, while if you prefer to use AF over manual focus when shooting video, there’s Dual Pixel CMOS AF – as we’ve seen with other recent EOS DSLRs, autofocus is snappy and quick, and a marked jump up from the system in the 5D Mark III.

A new 5D is a big deal in the photography world, and the Canon EOS 5D Mark IV doesn’t disappoint. While it may look underwhelmingly familiar at first sight, don’t be fooled – the engineers at Canon haven’t stood still.

Perhaps the most exciting development is the arrival of Dual Pixel Raw technology. As mentioned, this has huge potential for photographers – although until we can try it out for ourselves we’ll reserve judgement.

It’s no surprise to see the arrival of 4K on the 5D Mark IV, which, when added to the rest of the impressive specification, makes the Mark IV look like one of the most complete cameras out there, and perfect for a range of photographic subjects, from landscapes to sport.

The only sticking point – and it’s a big one – will be the price; we have to admit there was a sharp intake of breath when we saw the £3,629 ($3,499) price tag for the body only. That’s more than £1,000 more than the 50.6MP EOS 5DS (though prices are almost identical in the US), and much closer in price to Canon’s flagship 1D-series DSLRs, than we’ve seen with past generations.

Whether that’s a price worth paying, we won’t be able to say until we really get a chance put the EOS 5D Mark IV through its paces.