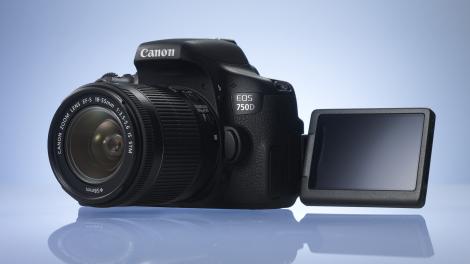 With three cameras in its entry-level range Canon already had plenty to interest novices and enthusiast photographers on a budget. Now the company has replaced the 700D with two models, the EOS 760D and 750D, rather than one. As the 700D continues in the line-up (for now at least), this means that there are five cameras in what Canon calls its beginners’ range. The new 760D and 750D, known as the Rebel T6s and T6i in the USA sit at the top of this group above the 700D, 100D and 1200D.

While the 750D could be considered the more logical upgrade to the 700D and is aimed at novices, the 760D is designed with more experienced photographers in mind and it has a few features from Canon’s high-end cameras.

Although they are aimed at slightly different people, the Canon 750D (Rebel T6i) and 760D (T6s) are essentially the same camera as they share many components. For a start they both have Canon’s new APS-C format CMOS sensor with an effective pixel count of 24.2 million, a Digic 6 processing engine and an autofocus system with 19 cross-type points for use when focusing images in the viewfinder. The cameras can select the appropriate AF point to use automatically in 19-point AF mode, or it can be set manually in groups in Zone AF mode (there are five groups of points for selection) or individually in Single point AF mode.

The cameras also have Canon’s new Hybrid CMOS AF III system (with Face detection, Tracking AF, FlexiZone-Multi and FlexiZone-Single modes) for use when images or video are composed on the screen in Live View mode. This Hybrid system has a greater number of focusing pixels arranged in a more regular array than in the past, and Canon says it’s about 4x faster than version II (used in the EOS 100D) and two generations ahead of the original Hybrid CMOS AF system in the EOS 700D.

In another first for Canon SLRs, both cameras feature Wi-Fi and NFC (Near Field Communication) technology to enable them to be connected to a smartphone or tablet for remote control and image sharing. You can even connect two cameras just by touching the NFC logos together and then transfer images.

Thanks to the new Digic 6 processing engine, both cameras can also shoot continuously at up to 5fps. While this isn’t meteoric by modern standards, it’s still very useful when shooting sport. The burst depth has also increased significantly upon the 30 JPEG or 6 raw files of the 700D to an impressive 940JPEGs or 8 raw files.

When shooting through the viewfinder the metering system uses a 7,560-pixel RGB and Infra Red (IR) metering sensor. These pixels are grouped into 63 segments (9×7) and the usual options of Evaluative, Partial (6.0% of viewfinder), Spot (3.5% of viewfinder) and Centre-weighted average metering are available. In Evaluative mode the metering is linked to the AF points, so the brightness of the subject could have an impact upon overall exposure. Unlike the 700D’s (iFCL) metering system the pixels on the sensor each have their own RGB-IR filter and are read independently within the zone, which Canon claims gives more accuracy and better colour detection. It certainly seemed to work for the 7D Mark II but this has roughly twice the number of metering pixels, so we’ll be testing the 750D and 760D’s metering system carefully to see how it shapes-up.

In Live View and video mode the same metering options are available, but the cameras use the imaging sensor to supply the information and Evaluative mode uses 315 zones, Partial metering covers 10% of the scene and Spot 2.7%.

Canon has been pretty quick to appreciate the benefits brought by touch-screen technology and like the 700D, the 750D and 760D have a 3-inch touch-sensitive Clear View II TFT screen with 1,040,000-dots and an aspect ratio of 3:2 to match the uncropped ratio of the imaging sensor.

The 750D and 760D don’t quite have quite the solidity of the 5D Mark III, but they have a chassis that is constructed from aluminium alloy and polycarbonate resin with glass fibre and they feel pretty durable for entry-level models. There’s no alarming creaking when you grip them tightly.

Both cameras have Near Field Communication (NFC) which provides a quick way of connecting them wirelessly to other NFC enabled devices such as a smartphone, tablet, another camera or Canon’s Connect Station CS 100. Once enabled via the menu two NFC devices are connect just by touching their NFC logos together. We found it was really easy to connect the 750D to the 760D to share images from one camera to another.

As they’re SLRs both cameras have an optical viewfinder. Canon has used a cheaper pentamirror in both cameras rather than the more expensive pentaprism found in cameras like the 70D further up the EOS line. This shows approximately 95% of the scene (the 70D covers 98%) so there’s a chance that images will contain elements around their edges that you couldn’t see in the viewfinder.

Helpfully, there’s an icon that displays if the camera detects flicker from fluorescent lights to remind you to activate Anti-Flicker Shoot mode if you’re shooting at high shutter speeds.

Pressing the Quick Menu or tapping the icon on screen gives a quick route to changing some key settings. Selections and adjustments can be mad either by touching the screen or via the navigation buttons.

Like the 760D the 750D’s Wi-Fi and NFC system is activated via the menu. Even though iPhones don’t have proper NFC compatibility, it’s easy to connect to the camera to download images or control the camera remotely. This dedicated light illuminates to indicate when the Wi-Fi system is activated, the 760D doesn’t have this light but an icon appears on the top-plate LDC.

Unlike the 760D, though, the 750D doesn’t have a sensor to detect when the viewfinder is in use so if you want to turn off the main screen display you have to press this button.

Depending upon which exposure mode you are using, aperture or exposure compensation is adjusted by pressing a button on the top of the camera while rotating the main dial near the shutter release.

The mode dial gives a route to the 750D’s exposure modes, including program, shutter priority, aperture priority and manual. Less experienced users will appreciate the quick route to options such as Full Automatic (Scene Intelligent Auto), Creative Auto (which allows you to take control with simple instructions using non-photographic terms) and a collection of user-selectable scene modes, including some within Special Scene (SCN) mode.

I had the opportunity to try out the 750D on a selection of subjects including cityscapes and parkour runners, but the cameras were pre-production models and these sample images are not necessarily representative of the final image quality.

Canon users have had to wait a long time for a new sensor but we’ll have to reserve judgement on the results until we’ve been able to run our full range of lab tests on a production version of this camera and tried it out in more real-world situations.

It looks promising, though, and Canon has taken an interesting path in producing two variants of the same camera. The 750D is perhaps closes in terms of design and operation to the existing 700D, while the 760D is a new design that fills the gap between the 750D and the larger and more advanced 70D.