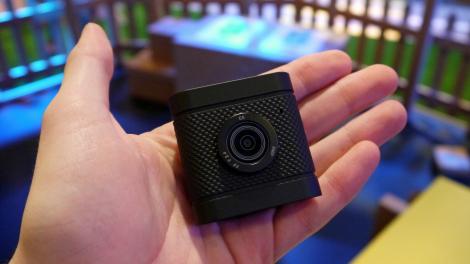 EE surprised us all when it launched its 4G streaming Action Cam earlier this year, but the likes of GoPro now have another competitor from the mobile network provider with the arrival of the ‘world’s first wearable 4G streaming camera’ in the 4GEE Capture Cam.

The Capture Cam is smaller and lighter than its rugged brother, with it aimed at casual users rather than those with overly active lifestyles. EE is not just pitching this as a consumer device though, highlighting potential benefits for business users as well.

The EE Capture Cam will be launched before Christmas 2015, but we’re still waiting on a firm release date. Price wise I’ve been told the Capture Cam will cost less than the £249 Action Cam – but exact details have not been released just yet.

You need to be aware that it’s not just the initial outlay you need to cover – as the Capture Cam’s live 4G streaming also requiring you to shell out on a PAYG or Pay Monthly data plan so you can share your walks in the park with friends in family.

Arriving in time for Christmas, the Capture Cam could be a hit this festive season if EE gets the pricing right – bring it in too expensive though and I think it will be a difficult sell.

The easiest way to describe the general design of the EE Capture Cam? It looks like the Instagram logo.

The cute, rounded block fits nicely in the palm and its rubberised exterior makes it feel rugged. At 90g it’s not too heavy either – you can happily pop it in your pocket without it pulling down your jeans.

The camera sensor, which shoots HD video, is the main attraction on the front, while controls are located on top.

A centralised shutter button flashes different colours depending on your mode – pink/purple lets you know you’re currently live streaming. Press it twice and it’ll give you a battery update by lighting up green, orange or red.

On one side of the shutter there’s a signal indicator, while on the other is a toggle switch allowing you to select either video or photo mode where you can take 8MP snaps.

On the base a flag hides the SIM port, microSD slot and microUSB charging hole. The Capture Cam supports microSD cards up to 64GB in size, allowing you to record more footage on top of the 4GB of space built into the camera.

Round the back there’s a handy clip built into the body of the camera, allowing you to easily mount it on an item of clothing, belt, bag or anything else you can find.

You also get an additional accessory in the box which slides into the clip and makes the 4GEE Capture Cam compatible with GoPro mounts – which is a nice touch.

The EE Capture Cam comes with its own smartphone application which is available on both iOS and Android. From here you can switch between live stream, record and camera, get a viewfinder shot from the camera and see vital information such as battery life and signal.

It’s a simple app with big buttons, and it looks very easy to set up. It’s worth noting that while the Capture Cam can record full HD, 1080p video, when it comes to streaming over 4G the resolution is capped at 720p.

That’s not a great surprise, as it takes a lot of bandwidth to stream video in real time, but it does mean that footage can look a little wonky. During my brief time with the camera I noticed the live stream wasn’t always smooth, and there’s some noticeable delay between camera and smartphone.

EE has partnered with Skeegle, allowing you to share your live stream privately with friends and family. All you need to do is select the people you want to share it with and hit stream, and they’ll receive a text with a web link where they can view the action.

They don’t even need to sign up to Skeegle, just load the webpage and hit play on the video window.

The 4GEE Capture Cam is an interesting offering from the mobile network, as it double downs on its live streaming devices.

Aiming it more at the wearable market shows the Capture Cam is much more of a casual device rather than the Action Cam’s active lifestyle focus.

This isn’t the camera pro-snowboards will be strapping to themselves before they hit the slopes, it’s aimed at those who want to share life moments with a select few friends and family.

If EE can keep the cost to a sub-£100 level I can see the Capture Cam grabbing some action over the Christmas period, and its cutesy design and simple setup means those of all ages can enjoy using it.