Can GoPro’s debut 360° action cam bring virtual reality creation from a hobbyist niche to the mainstream?

A toughly made, extensively featured, and expensively priced gadget, the Fusion nevertheless could turn out to be a one-off. Unlike GoPro’s flagship lineup of Hero action cameras, it doesn’t look like the Fusion is going to get a refresh anytime soon stop how do we know? Just last month GoPro released its new Hero7 action cam, and a Fusion MkII was nowhere to be seen. Can the year-old GoPro Fusion (US$699, UK£560, AUS$1,000) still flourish a year on from its launch?

So what does it have that other 360° cameras do not? Perhaps the Fusion’s headline feature has nothing to do with the 360° format at all. Called over-capture, software inside the Fusion allows you first to capture the entire surrounding scene, then to post-frame the footage as a regular Full HD widescreen video. So, for example, you could film a freestyle ski park in its entirety and later produce a video of one skier performing tricks and jumps. Or produce a widescreen video that follows your bike ride first-person, or the cyclist in front of you, but also peels off to show your surroundings. It also means you can share videos – which retain a 360 feel – with anyone on any platform, really easily. 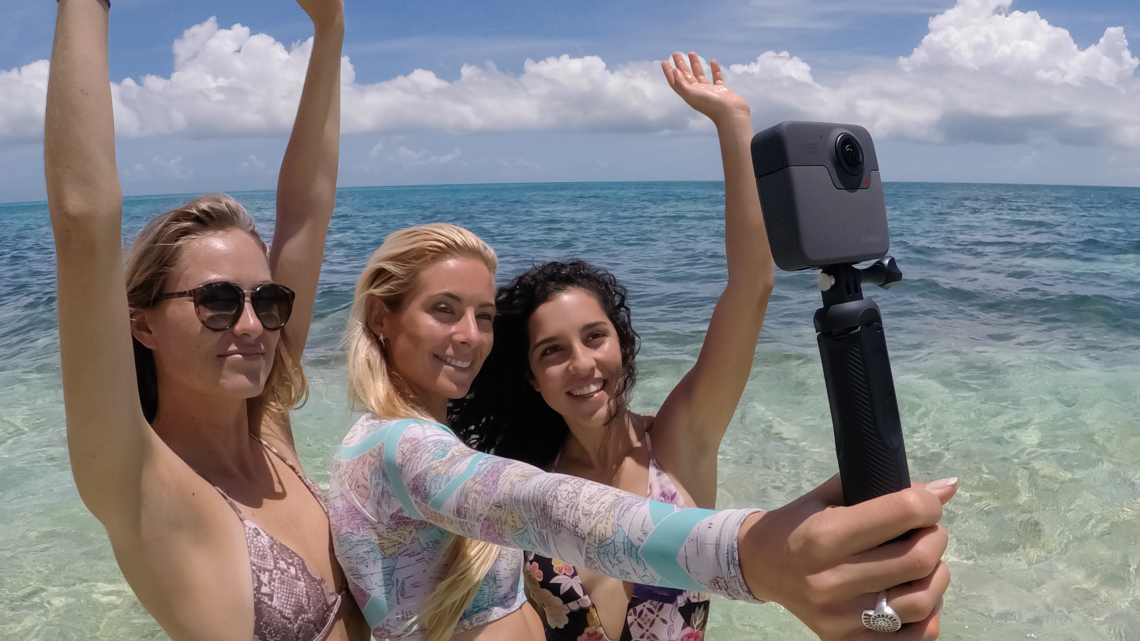 Is GoPro hedging its bets? Is it really committed to the 360° format? We think so; over-capture is really about one very important thing in videography, and that’s never missing a second of the action. For now, it may seem like a novel feature, but in future, we are convinced that over-capture will be a standard, must-have feature in any video recording device. Its rivals include Insta360 One’s FreeCapture and the Garmin Virb 360’s HyperFrame.

Also unlike most 360° cameras, Fusion has a ton of sensors, beefed-up audio, and voice control. However, there are some glaring omissions from its extensive features list; there’s no 100fps slo-mo mode, nor is there the chance to indulge in 360° live-streaming. Does anyone broadcast live 360° across the internet? No, they don’t, and if that ever goes mainstream, it’s going to be a while yet. So we don’t think that’s a big issue.

Few 360° cameras are as tough and outdoorsy as the Fusion. For starters, it’s waterproof to five metres, so you can take it onto the water. That should please anyone intending to use it for extreme water-sports, and for skiers wanting to capture the action from the slopes in the wraparound format. It also appears exceptionally toughly built, with a rubberised outer shell, rounded corners, and side panels that have a built-in grip strip. It’s built for the outdoors, but the 73 x 75x 23mm Fusion does weigh 226g with its 2,620mAh lithium-ion battery in place. Its square shape also isn’t as easy to slip into a pocket as some other 360° cameras.

Uniquely for the genre, the Fusion has a slot either side of the battery for inserting microSD cards, one for each lens. Even better, when you buy the Fusion you get two free 32GB SanDisk Extreme microSD cards in the box. That’s a nice touch from GoPro. Another small hatch hides the USB-C slot for recharging.

However, perhaps the most important connection of all is a universal tripod thread (1/4-inch) on the Fusion’s undercarriage. It can be used to put the Fusion on any tripod, and any other GoPro mount, though in the box is the Fusion Grip Mount, a 23cm-long baton that unfurls into a 53cm long tripod with short feet. It’s a bit tricky to attach the Fusion to it, largely because its undercarriage interferes with the screw. In use, it just about fulfils its brief by placing the Fusion well above the ground to produce a 360° video with plenty of balance, though it’s no good on the rough ground, and we didn’t feel confident using it in strong winds. Also included is a semi-hard box that can be wrapped around the Fusion even when it’s attached to that Fusion Grip Mount.

When it comes to operating the Fusion, it’s all about simplicity; there are only two buttons, the power button, and the shutter button. There’s also a tiny LCD screen, whose menus can be scrolled through using those two buttons.

“GoPro, take a photo”. The Fusion likes to be spoken to, and though voice control is somewhat limited, it worked well during our test. So did the camera itself, with two major bones of contention; the app and the GoPro Fusion Studio software.

However, you can just use the in-camera controls while out and about, and it’s consistently possible to produce some excellent footage with the Fusion. The resolution is not particularly exciting; 5.2K proves just enough, and there’s definitely room for more pixels. What we did like was the image stabilisation, which works really, really well. Ditto selfies, from which it’s very easy to edit-out the selfie stick.

The over-capture mode is easy to use, at least at first. Fusion Studio allows you to import a 360° video file (saved by the Fusion as an MP4 file) and then dynamically change the perspective of the video. The software makes it easy to re-frame and to crop, but on the app, it’s all a bit tricky, as well as basic. However, there is one drawback with over-capture mode, at least for now: resolution, or rather, lack of. Filming in 5.2K resolution may seem like an advanced feature, but crop down to a 16:9 image and all you are left with is a Full HD resolution video that looks pretty basic. Too many pixels get lost in the process, which is why over-capture probably isn’t going to be a really big reason to buy the Fusion until 8K, or even higher resolutions, come along. For now, Fusion’s over-capture videos are clean and colourful, and feature some great image stabilisation. JPEGS can be either snapped purposefully or grabbed from videos, and take advantage of 360° features such as ‘little planet’ mode and the drone-like ‘angel view’.

However, the specs did lead us down a few blind alleys; ISO6400 makes the Fusion seem ripe for trying an all-sky video at night to track the movements of stars in the night sky. We did try that, but the results were not good.

The Fusion is short and sweet, lasting only 70 minutes in our test. However, that’s more than most 360° cameras we’ve tested. 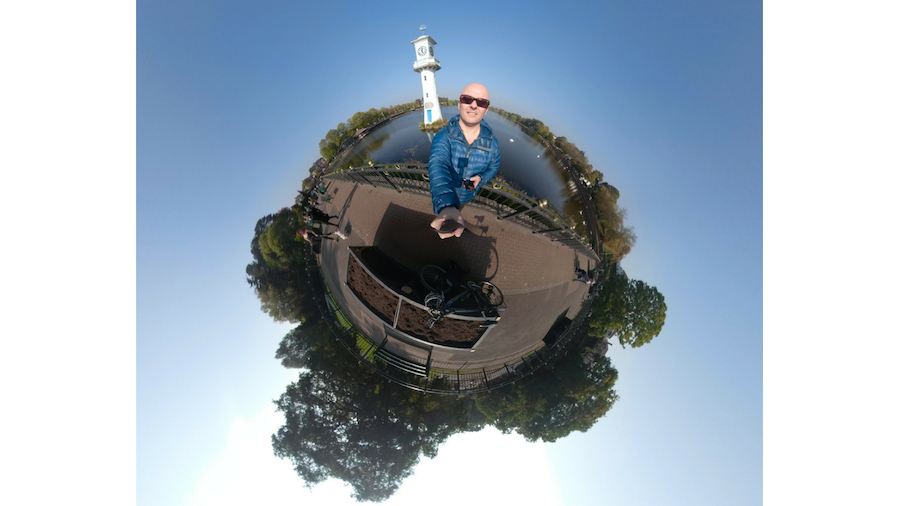 GoPro’s app is basic. In some ways, that’s a good thing, but time and again during our test it lost connection to the phone. The initial process wasn’t helped by inane requests to make decisions on personal data, set notifications, and enable auto cloud backup, all of which interrupted the pairing process. After the fourth attempt, the Fusion and phone were finally attached after reinstalling the app and entering the password manually, which is specifically what is not supposed to happen. Oh well.

When it works, the app lets you see a low-resolution live feed from Fusion, but more importantly, lets you change settings, and later, share results to YouTube and Facebook … if you have time to waste. Processing takes such a long time. Now the app can export photos and videos in full resolution, with stabilisation, that goes double.

You can perform a simple over-capture in the app, but it’s limited to zooming and basic pans. During our test it failed to show thumbnail images of videos and photos already taken, so choosing which files to edit took a lot of guesswork. Editing on such a small screen was not at all easy, but it was the constant loss of WiFi connection to the Fusion that made the app almost unusable.

Fusion Studio 1.3 does all the things the app allows, and more. It’s a great piece of software, but it’s slow. So slow. Plug the Fusion into a computer and the software spends 10 minutes ‘preparing media’. It then takes another five for the videos on the microSD cards to load. Finally, when you’ve made all the edits you want – and they’re simultaneously extensive and yet simple to make – it starts rendering. Hours and hours later, your computer probably having frozen-up, you’ll have some fun videos. So only render what you absolutely need to, and leave it going overnight. The Fusion is impressive and offers great quality video, but it’s all rather complicated and time-consuming.

Fusion is not about 360. With its over-capture allowing post-editing of sequences in widescreen video, Fusion is about one simple and critical aspect of filmmaking; not missing a thing. Selfies can be framed without the selfie stick showing, and there are some 360-style photo options, too. However, the Fusion is let down by both its app and its Fusion Studio software. The former is hampered by frequent connection issues and fiddly editing options, and though its ability to render full resolution clips is laudable, it can take up to an hour to download a few minutes of video. Ditto Fusion Studio, which is very heavy on processing power and just takes so, so long.

So while the device itself is tough and works fast, actually producing usable footage from Fusion is a pain. Add to that its slight lack of resolution compared to the Yi 360 VR and new Insta360 One X – and its lack of a 100fps mode for slo-mo – and the Fusion seems like an option only for professional content creators with time (and processing power) on their hands. However, it does have a leg-up on its competitors in that it’s waterproof, and more toughly made. For some, that will be enough.