This may be our very first look at the successor to Android Pie.

XDA Developers has gotten a hold of an alleged build of Android Q and they’ve loaded it up on a Pixel 3 XL to see what’s changed.

The build was allegedly made this week with February 2019 security patches and is up-to-date with Google’s AOSP internal master, as per XDA. But we won’t see any Pixel-specific software customizations or Google Play apps, sadly. But let’s dive into what we do know.

The biggest reveal? Dark mode – across the whole OS. While you can currently turn the lights down low for certain apps, toggle this option on (located in Display Settings) to turn the base-level interface including the Settings, Launcher and Files app dark grey. In this mode, the Volume panel, Quick Settings and notifications are all black. 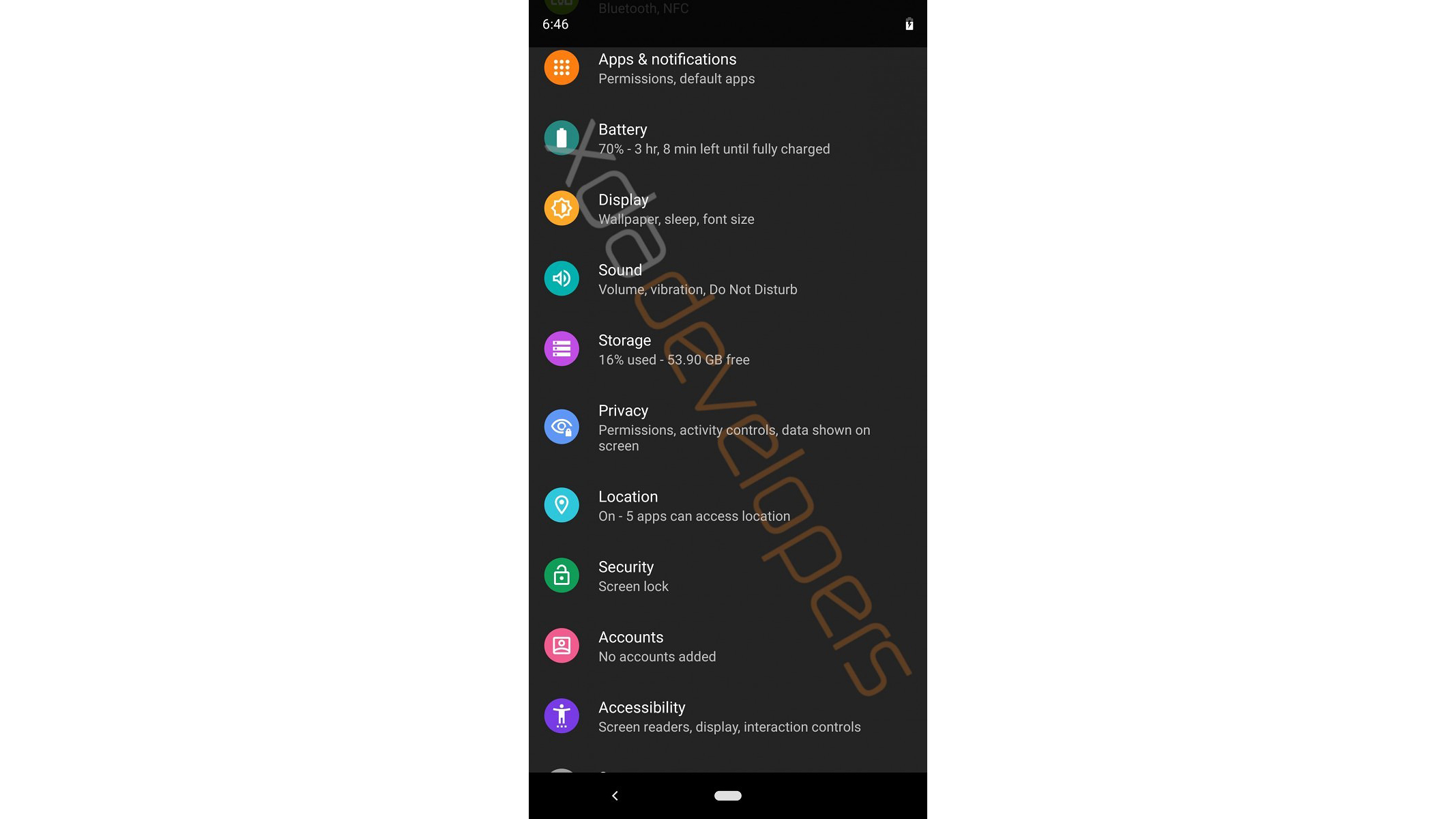 Even better, XDA dug up a Developer option that forces apps that don’t have a built-in dark mode to revert to one anyway.

Android Q also supposedly improves permission settings. Now you can get an overview of permissions accessed by apps and tweak them – like only giving certain permissions while the app is in use, XDA suggested. Each particular app’s permission page has been updated to see which ones have been given access or blocked from certain permissions, and you can quickly open, uninstall or force stop the app, too.

There are apparently a slew of new developer options. One, which “force[s] experimental desktop mode on secondary displays,” XDA couldn’t get working, but it seems like a feature to use the phone through much larger displays, a la Samsung DeX.

Other developer options are in a similar state of incompletion, like a built-in screen recorder, or an unclear functionality, like a “Game Update Package Preferences” setting. But some have a clearer purpose: enabling freeform windows has returned, and once switched on, you can pop open freeform multi-windows by pressing and holding an app icon in the recent apps overview, according to XDA.

There are also a pair of new Accessibility settings. You can choose how long temporary messages asking you to take action (aka notifications) stay on screen, as well as a setting to pick how long you want to read messages that automatically go away. It’s not totally clear what these are specifically referring to as the UI likely hasn’t been finalized.

A few more odds and ends

The remaining additions include a “sensors off” option in Quick Settings that apparently switches off radios and goes into airplane mode, but XDA posited that it might also disable the always-on sensors (accelerometer, gyroscope) in the smartphone.

Screen lock has a couple new options: “SmartLock only extends unlock” allows trusted devices to keep your Android Q-powered smartphone awake for longer but won’t grant unlocking privileges, while “Lock screen when trust is lost” will lock up the smartphone when a “trusted device” is, well, no longer trusted.

Finally, a new files app lets you arrange by images, documents, audio, video, and other options while you’re browsing through your stuff.

That’s all that XDA found thus far, but it’s the first huge look at the changes that may be coming to Android phones this year.