Organizer
Gadget news
DirecTV Now: What it is and how it stacks up to Sling and PlayStation Vue
3:01 am | March 14, 2019
Author: admin | Category: Cameras | Comments: None

After years of operating DirecTV, AT&T has finally gotten into the alternative TV market with DirecTV Now, a cord-cutting service that offers tons of channels for as little as $50 per month.

It’s ironic, really, that DirecTV Now is being released by AT&T – a bread and butter cable company that said a few years ago that cord cutters would never control the market. But besides being somewhat a somewhat comical twist of fate, AT&T’s switcheroo does highlight one thing: the world’s turning to streaming, and even the big cable companies can no longer ignore that.

Of course, DirecTV Now isn’t the only one on the market. Its main competition – YouTube TV, Sling TV, Hulu with Live TV and PlayStation Vue – are all already on the market and offer similar deals for a bit less per month.

That’s saying nothing of Apple’s live TV streaming service that’s expected to hit the web any day now, and Disney+, the nebulous service from one of the world’s largest movie studios.

So, which one’s best? And, more importantly, are any of them worth cutting the cord for? We’ll take a look at the differences between the big three cord-cutters a little later. But first, let’s talk about what exactly DirecTV Now has to offer.

Before March of 2019, there were a total of four different bundles you can subscribe to with DirecTV Now that included the Live a Little, Just Right, Go Big and Gotta Have It! packages. Any subscriber who’s currently enrolled in those packages will get to keep them, but AT&T says they’ll cost more per month than they did before.

That said, things all shifted around in March of this year when DirecTV Now announced two new packages, DirecTV Now Plus and DirecTV Now Max, that would step in to replace the older packages and start at new price of $50 per month.

To that end, DirecTV Now Plus offers over 40 channels – including HBO, HBO Family and HBO Latino – for $50 per month. DirecTV Now Max ups the channel count to around 60 and will set you back $70 per month.

In addition to the base packages, AT&T also offers Showtime, Starz and Cinemax as add-on packages for $11 extra each per month. 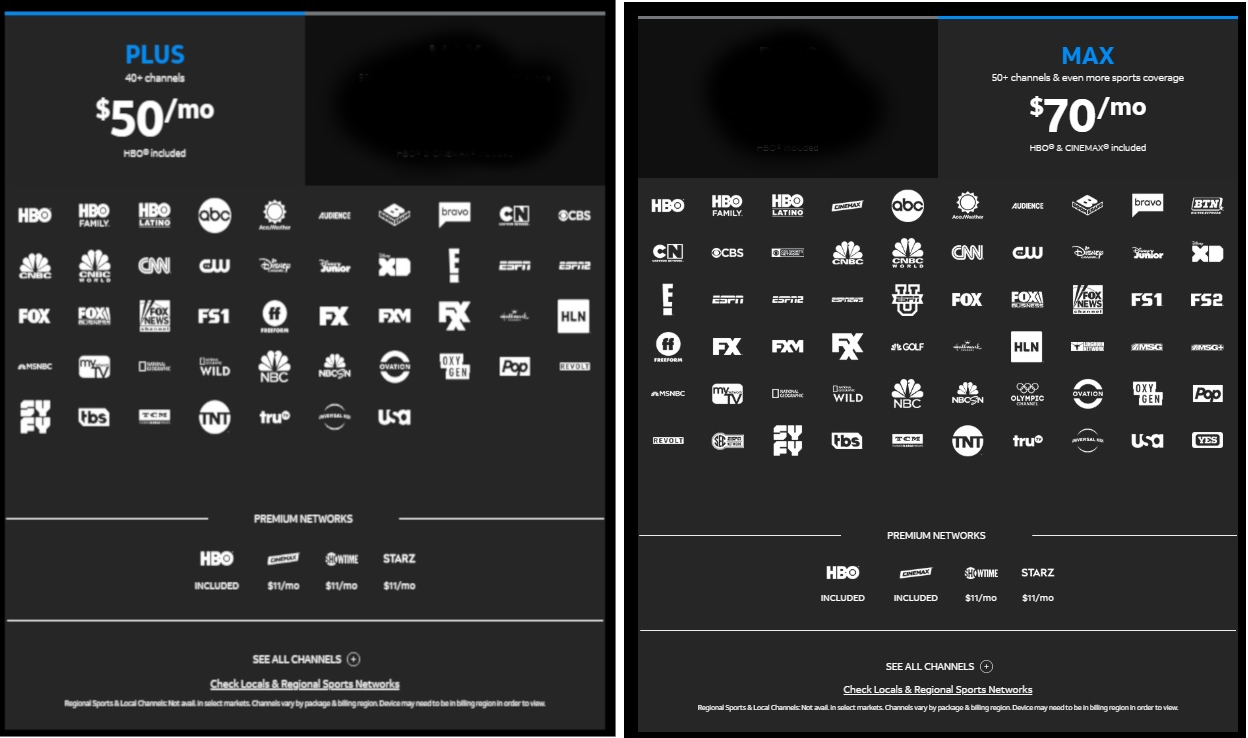 So what channels are included? You can find a complete list over at DirecTV Now’s website and while we’re not going to list each and every channel here, we will tell you that most people will be fine with the base entry-level package that includes local channels and popular favorites like FX, TBS, TNT, CNN and Fox News.

The next step up, called DirecTV Max, adds a few more movie channels like Cinemax, and adds some of the specialty sports networks like the SEC Network, Longhorn Network and MSG for $70 per month.

For a full list of the channels you’ll get with each package, you can head here.

Almost all of the channels allow you to watch TV live, while most of them also let you watch on demand, which is very helpful for those of us with busy schedules and a nice perk to anyone planning on supplementing this service with something like Netflix or Amazon Prime Video.

Want to see what the service was like before the change? Here’s what DirecTV Now used to offer:

Enough about what DirecTV Now has to offer – what about how it compares to the competition?

On one hand you’ve got Sling TV. It’s been around for a few years now, and has been growing with new channels every few months or so. On the other, PlayStation Vue is also a pretty serious contender, picking up DirecTV’s slack by offering CBS in a number of major cities.

Here’s a rundown of which service is best and for what:

The best service for the most channels

As mentioned, the base package for the new DirecTV offers a total of 40+ channels for $50 per month. Unfortunately, that’s not a great price, especially against the competition which almost all offer more for less.

As you can see, the base package of PlayStation Vue is a good $5 more expensive than DirecTV with 15 channels less. Despite that, if you watch a lot of TV on CBS or CBS-owned channels, then PlayStation Vue is actually your only choice – neither Sling nor DirecTV offers CBS. 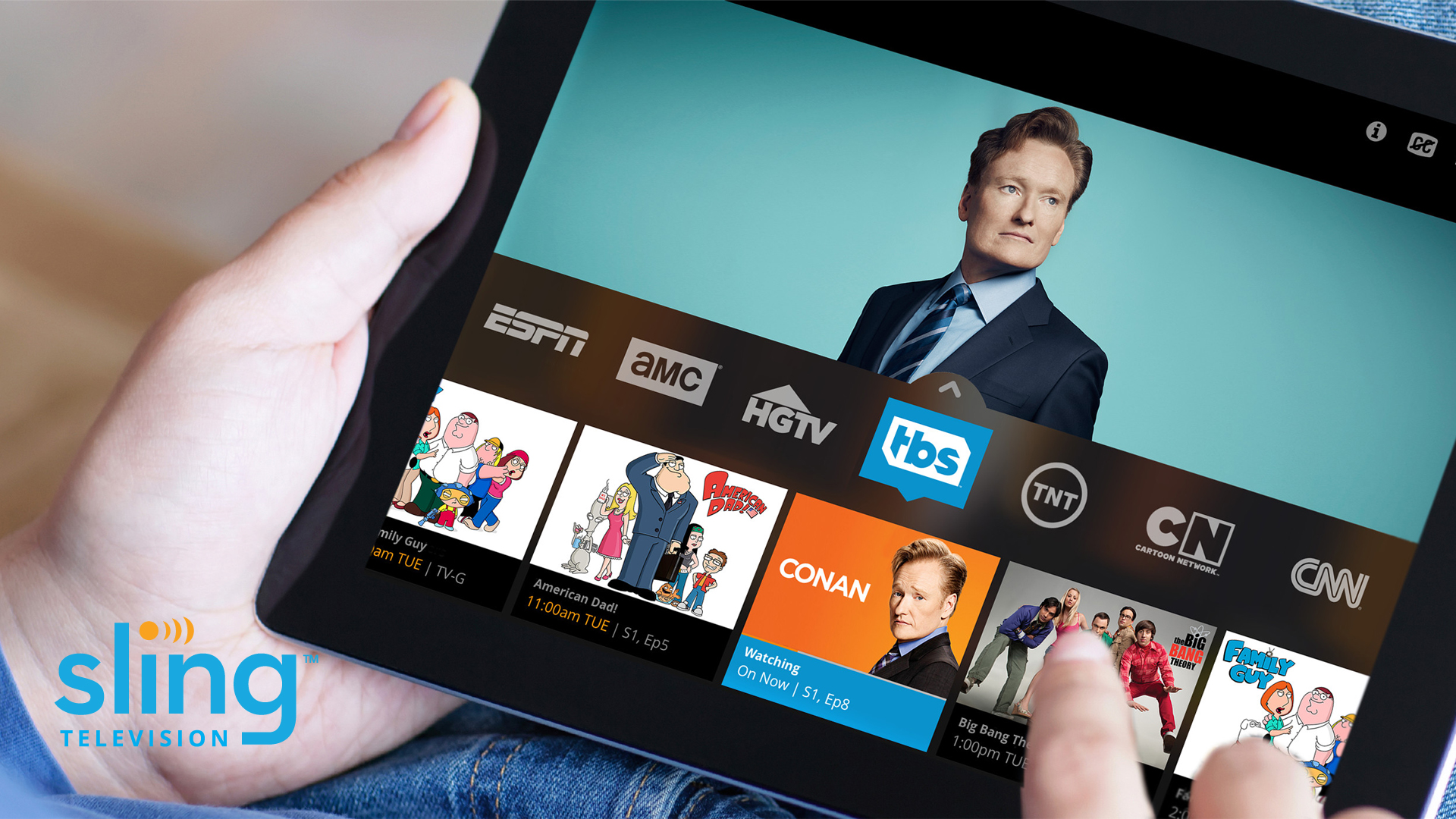 Sling TV is a little different than DirecTV and PlayStation Vue – it offers two base packages, called “Orange” or “Blue.” Orange offers 30+ channels for $20 per month, Blue offers 40+ channels for $25, and Orange+Blue offers all of the channels between the two packages.

On top of that, customers can pay $5 for add-on packages, such as “Sport Extra,” which offers a range of sports channels. Customers can also pay a little extra ($15 per month) for HBO.

Conclusion: All things considered, if you get all the channels you need from Sling TV, then it’s worth choosing Sling over the others to save a few bucks, but if not, consider YouTube TV, Hulu with Live TV or PlayStation Vue instead.

The best service for video quality

Got a fancy new 4K TV? Unfortunately, none of the services on offer officially support 4K resolution just yet, although that’s only partly those services’ fault – TV channels have to make the switch to 4K first. All of the services offer streaming of 1080p, which is pretty good, however that resolution will downscale depending on your internet quality.

The best service for compatible devices

All of the services are billed as allowing customers to watch their favorite TV shows on all of their platforms. But will you truly be able to watch on every device you want to?

DirecTV Now is compatible with a number of devices, but there are some gaping holes in that compatibility list. While the service works with the Amazon Fire TV and Fire TV Stick, it does not work with Roku – however it says Roku compatibility is coming in 2017. DirecTV is also compatible with Google Cast, Cast-enabled LeEco TVs, and the major internet browsers. Last but not least, you’ll be able to watch TV on your Android devices, and iOS is coming in 2017.

Sling TV, on the other hand, is compatible with all of the major platforms. That includes iOS, Android, Amazon Fire, Apple TV, Roku, Android TV, LeEco TVs, and even Xbox One.

Last but not least is PlayStation Vue, which is also compatible with pretty much all major devices. That includes iOS, Android, Apple TV, Roku, PlayStation, PS4, and most major internet browsers.

The best service for multiple streams

This one’s pretty straightforward – not all services let you watch on unlimited devices at the same time. DirecTV Now clearly loses this one, only allowing for 2 streams at a time. Interestingly enough, Sling offers a different number of streams depending on the package – Orange offers 1 and Blue offers 3.

But it’s PlayStation Vue that wins this category hands down, offering 5 concurrent streams at a time.

Which one should you get? It depends!

So which service is best? Well, it’s complicated. For those willing to deal with only streaming on two devices at a time and don’t mind paying more, DirecTV is fine.

Sling TV is better for those who only really need a few specific channels and want to save a few dollars, while PlayStation Vue is great for families who need multiple streams or those who watch a lot of CBS.

Want to see what DirecTV Now is all about? Head on over to AT&T’s website to sign up for a free 7-day trial.