Perhaps you snagged an iPhone 7 as an inexpensive option or you’re just waiting to get a great deal on an iPhone XS – but either way, you understand good value. Since Apple updated the iPhone 7 to iOS 12, you have few reasons to abandon your functional and feature-rich phone for an expensive new device. But if you don’t have a case, you’re not protecting your investment.

Sure, the iPhone 7’s metal unibody can keep it safe from short falls, but an accidental plummet at the wrong angle can still shatter your display into splinters, and you’ll have to pick shards of glass from your fingertips. It’s not just the screen you should worry about: the phone’s slick metal phone body can be scratched, dinged or dented, too.

A case is a smart idea to help protect the frame and display of your iPhone 7. And lucky for you, the cases for the iPhone 7 will fit the iPhone 8 if you decide to upgrade sometime later.

Here’s our list of the best cases out there for Apple’s reliable iPhone 7. If you opted for the bigger version of the phone, head on over to our roundup of the best iPhone 7 Plus cases.

Have you loaded iOS 12 onto your iPhone 7?

Still have one of the older Apple devices? Here’s our definitive list of the best iPhone 6 and 6S cases.

Note: we’ve ranked these from cheapest to most expensive according to prices at time of writing. 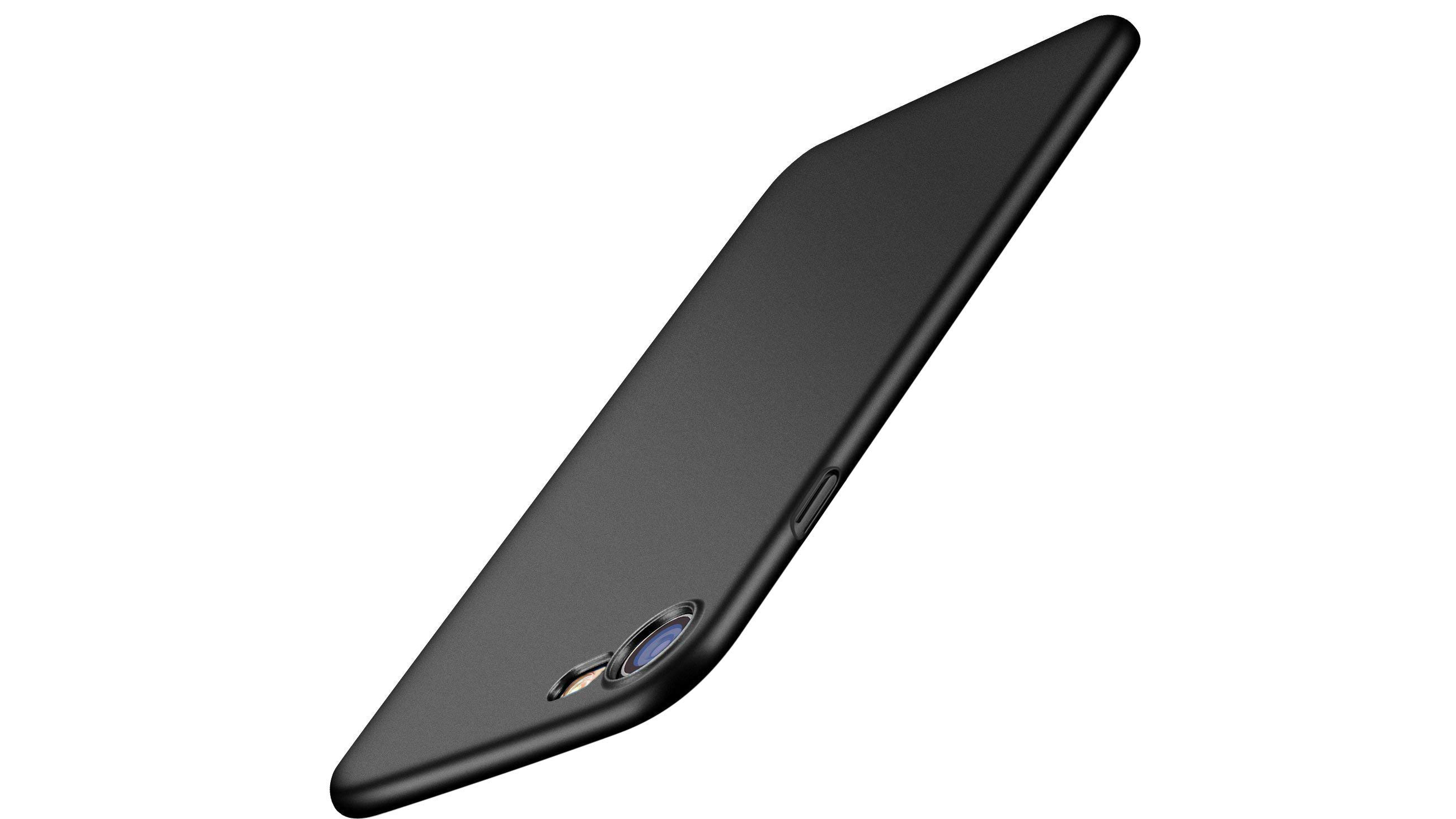 Torras has put out a phone case that’s just slightly bigger than the iPhone 7 itself, which is perfect for the person who wants a simple, no-nonsense look for their phone. There’s even a little 1mm raised lip around the camera lens to protect it from errant drops.

It’s obvious that this won’t protect your phone as well as, say, an Otterbox, but for those who want to wrap their device in simple elegance, the Torras Slim Fit case will do the trick. Pick one up for $11 (£8, AU$15) on Amazon here. 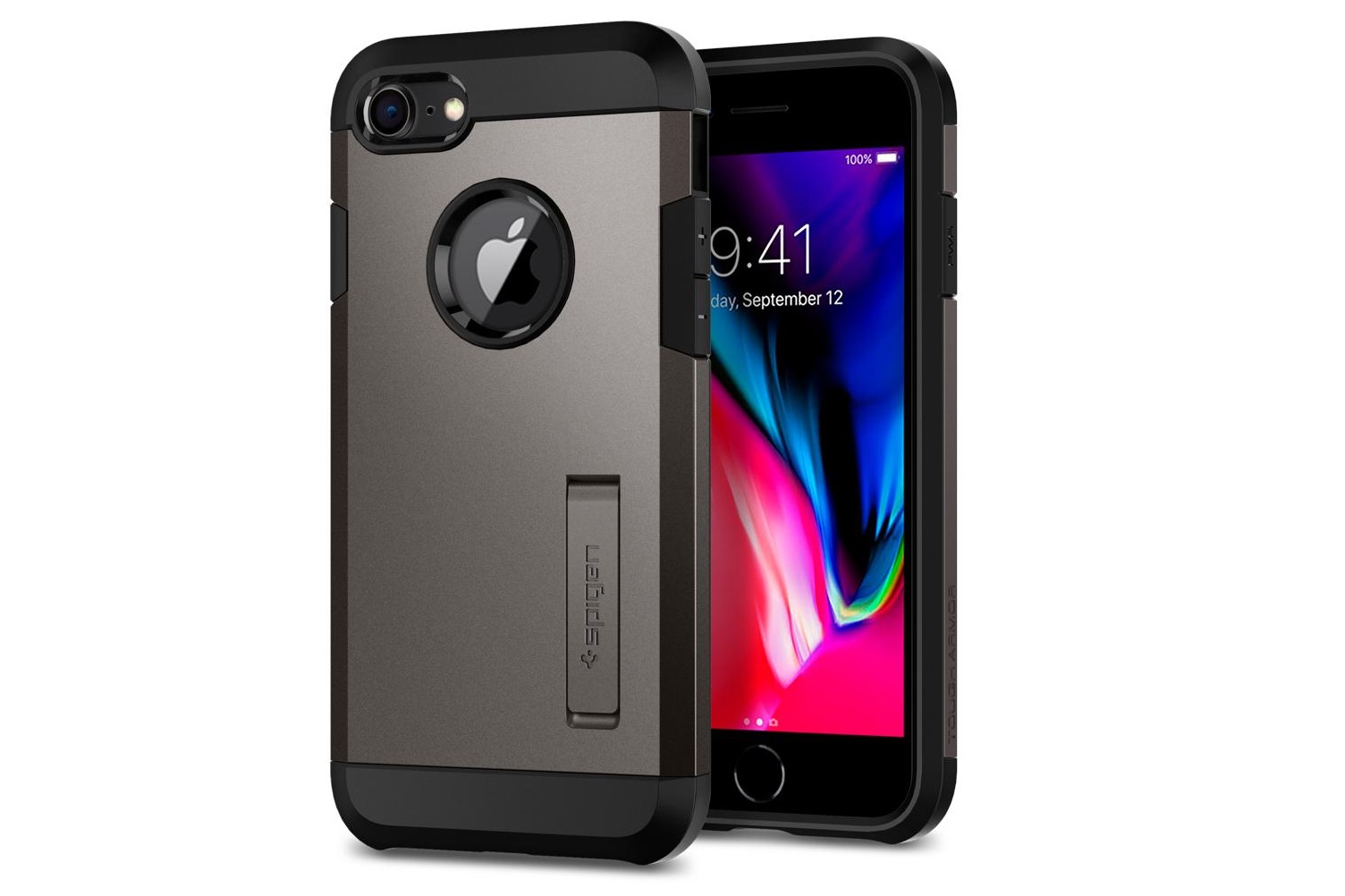 Spigen’s Tough Armor series aims to provide solid protection at a low price. Its flexible TPU body envelops the phone, while a polycarbonate plate layers protection on the back. The latter even has a built-in kickstand if you like watching media on your phone. 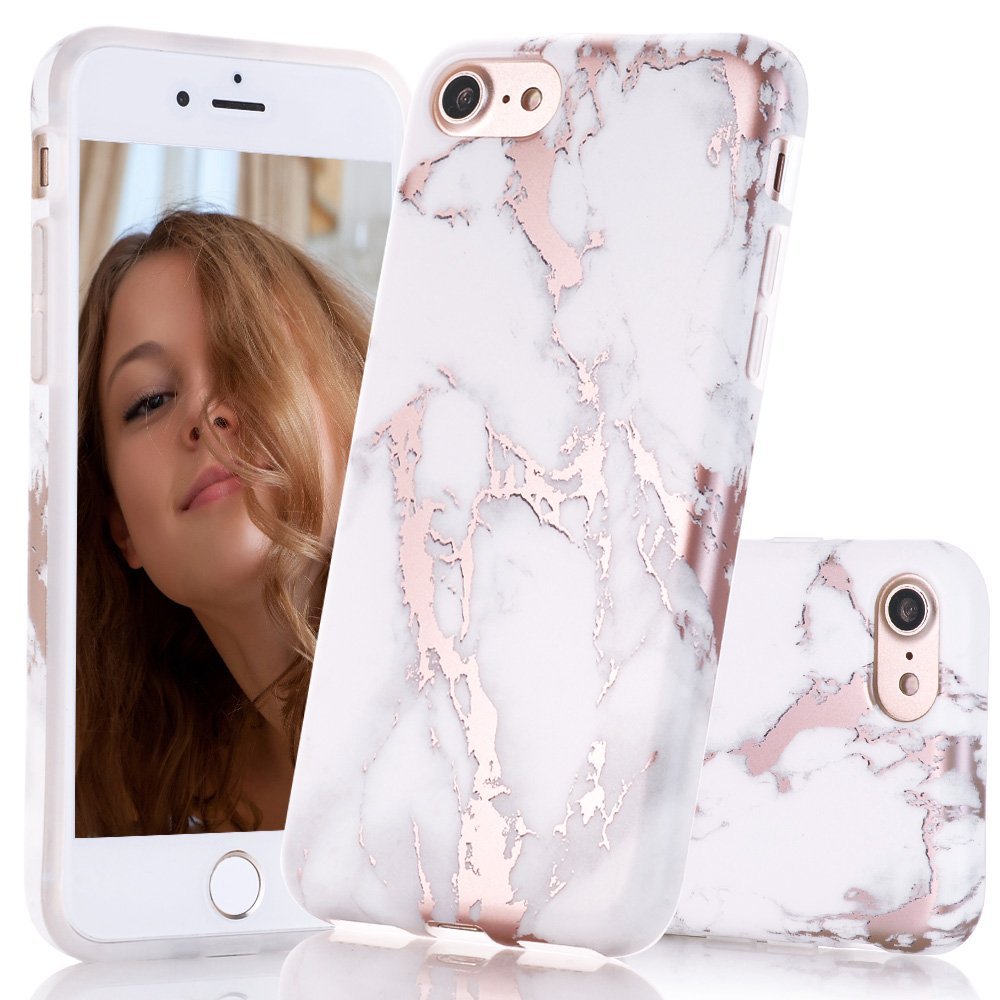 For all you marble lovers, here’s the phone case for you. Baisrke has an inexpensive case that comes in several colors and hues accentuating white, black and pearlescent marble.

The case itself is made of a soft rubber silicone, so don’t expect much protection from serious drops. But if you can’t live without this look, you can grab the Baisrke marble case for just under $11 (£8, AU$15) on Amazon here. 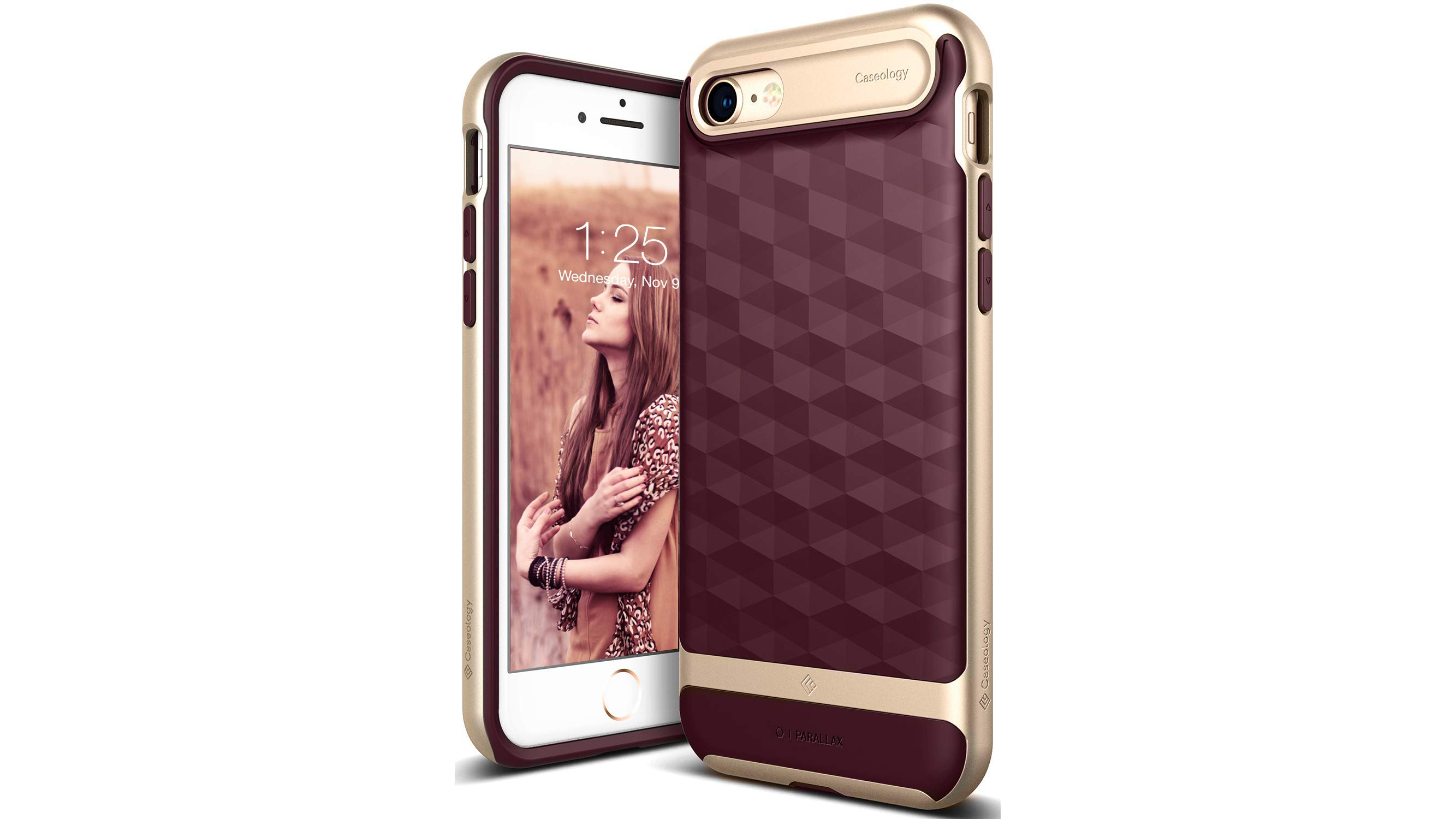 The Caseology iPhone 7 Parallax case has a neat design and attractive burgundy-on-gold look for those who want to dress up their phone a little differently than their peers. It’s got multiple layers to help protect your phone from drops from plenty of angles.

It’s decent protection and good looks at an affordable price – perfect for your less-expensive iPhone 7. Pick up the Caseology Parallax case for $14 (£11, AU$19) on Amazon here. 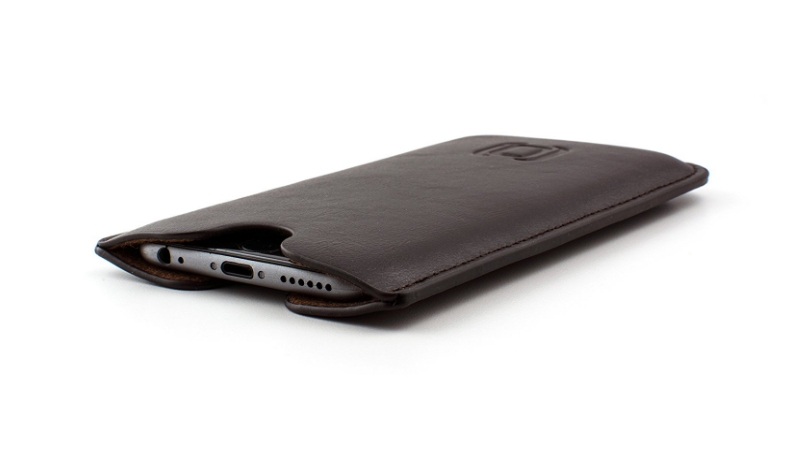 Most people would probably rather keep their phone unadorned by a case, particularly when their phone is as stylish as the iPhone 7. That’s why a sleeve can be a good option, as it keeps your iPhone protected while it’s in your bag or pocket, but shows it off in full when you’re using your phone.

This Dockem sleeve also stands out thanks to its attractive faux-leather design and its low price tag, though of course, like any other sleeve it won’t protect your phone while you’re using it, so this isn’t one for the clumsy. 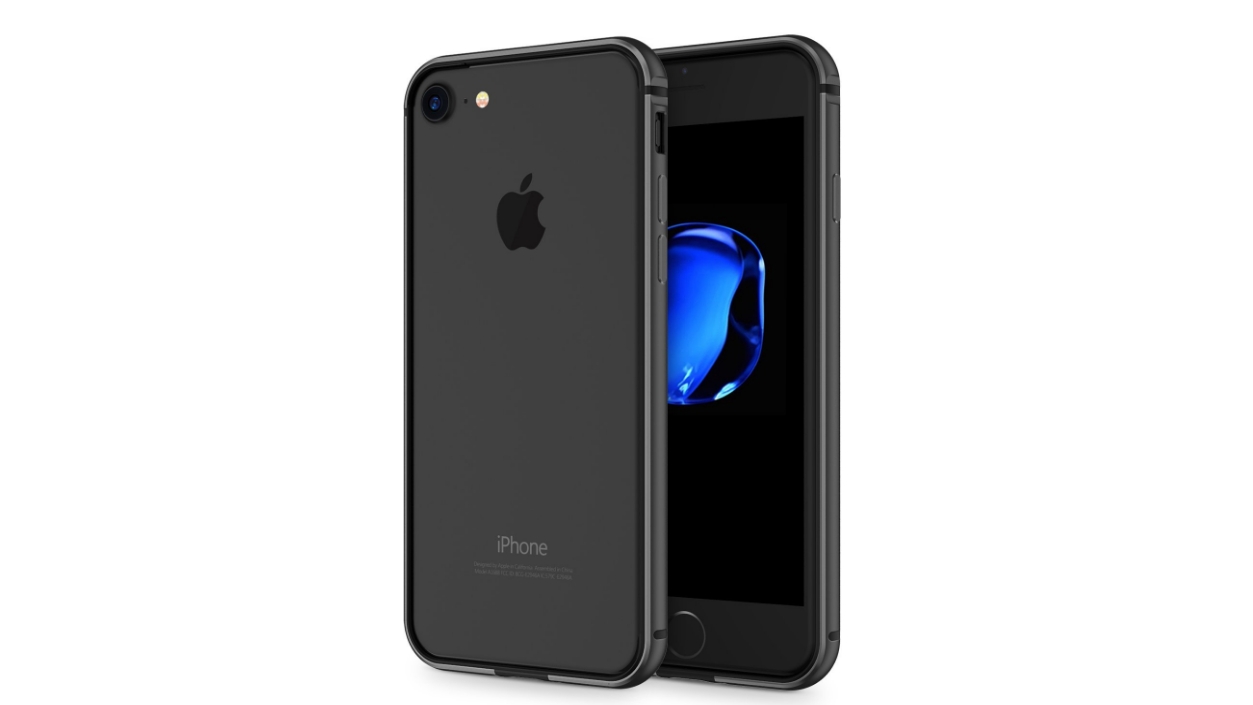 Your iPhone 7 might be metal, but most cases aren’t, which means you’re inevitably left covering it in cheaper plastic, or pricey but still different leather.

There are some exceptions though, such as this Ranvoo bumper, which although plastic on the inside has a layer of aluminum on the outside, and it comes in all the same colors as the iPhone 7 itself.

As it’s just a bumper rather than a full case the back of your phone is left uncovered and the bumper itself is almost invisible – unless you choose a color that contrasts your phone, rather than matches it.

The skeletal nature of the bumper means it’s not the most protective thing around, but the edges are raised, so even if your phone hits the ground on the front or back it should remain safe as long as the surface it collides with is flat. 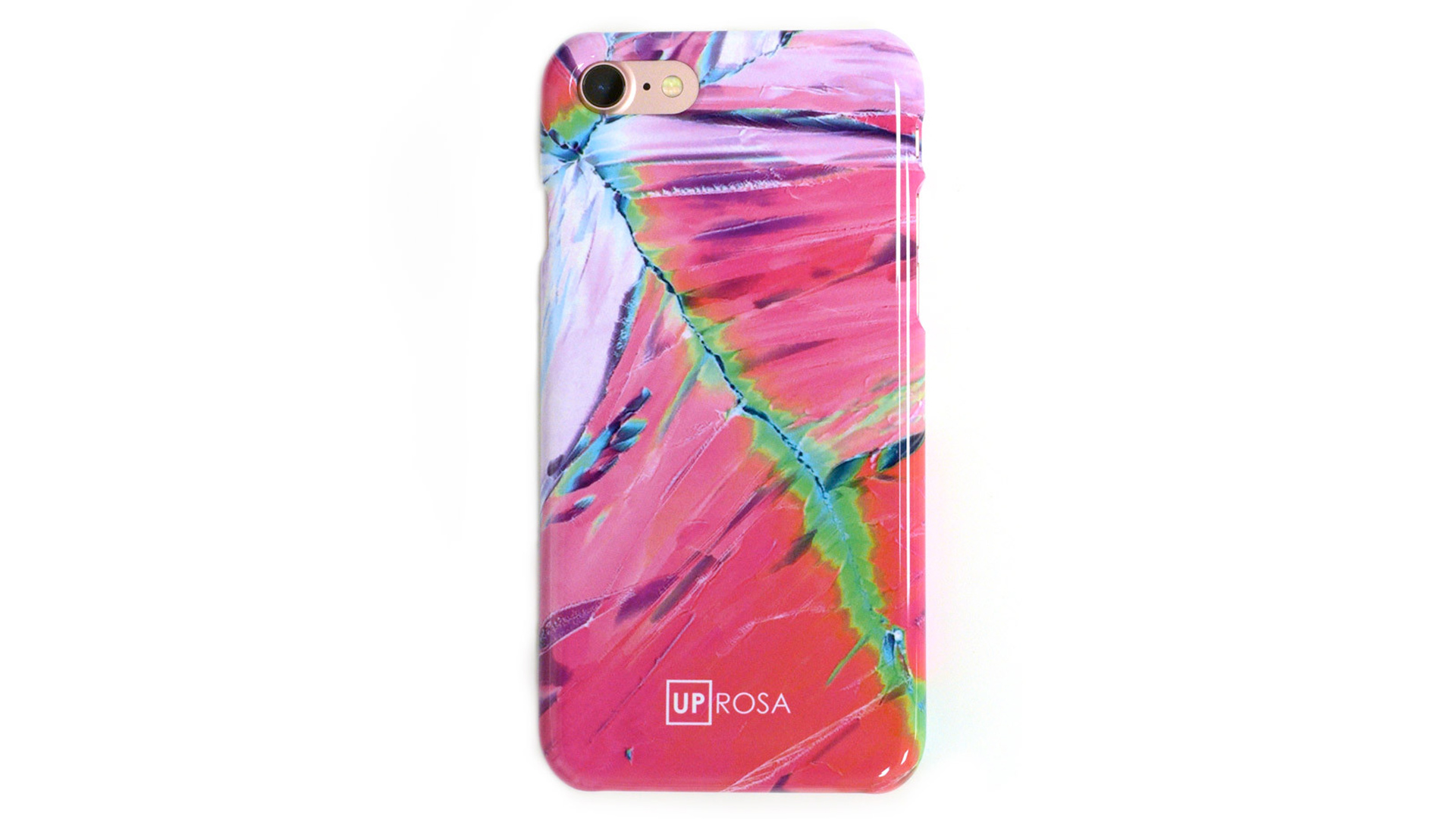 The construction of Uprosa’s cases is entirely pedestrian, as they’re simply made of flexible plastic. However, their designs are something else.

Uprosa’s case graphics come from images submitted by researchers and science students, whose job it is to look at stuff under microscopes, so the images you see on these cases are shots taken using microscope photography. Here’s the description of the ‘flamingo’ design seen in the image:

“The same chemical (citric acid) that makes a lemon tart forms colliding pink oceanic waves through the lens of a microscope.” Brian Cox would approve. 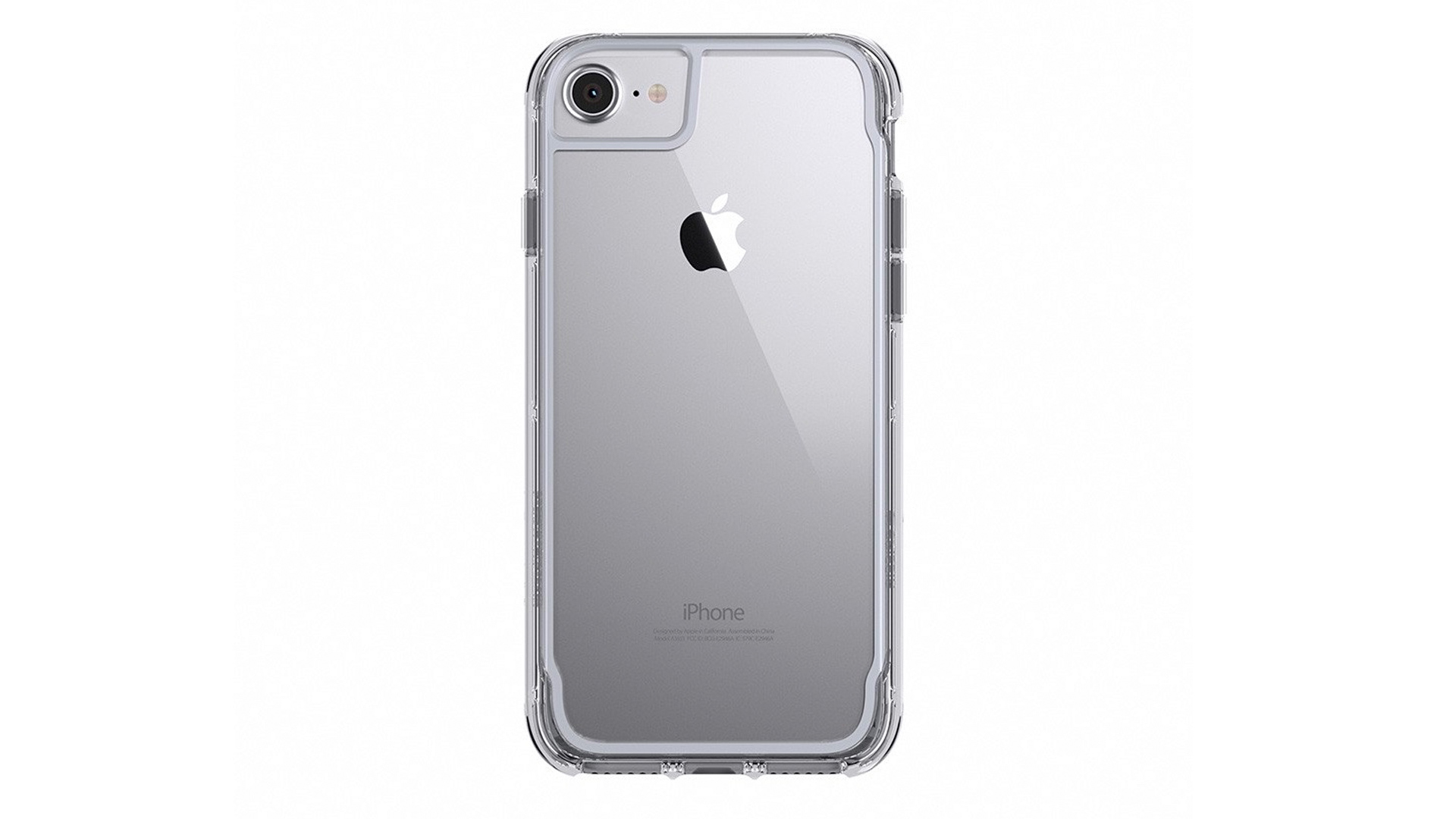 A case is always a balancing act between making your phone look as it should and keeping it protected. The Griffin Survivor Clear has a shot at gaming the system, with clear walls and built-up bumpers designed to take the force of any impacts while keeping the look intact.

Sure, you can tell there’s a case on your iPhone, no denying it, but at least you can see the color of aluminum you chose underneath. Griffin says the shell has 6H hardness, which is as hard as some tempered glass, and provides great scratch resistance.

The case can also take drops of 1.2m, and as it doesn’t cost a bomb you shouldn’t feel too bad about replacing the Survivor should an unfortunate incident occur. Better than a bashed-up iPhone, right? 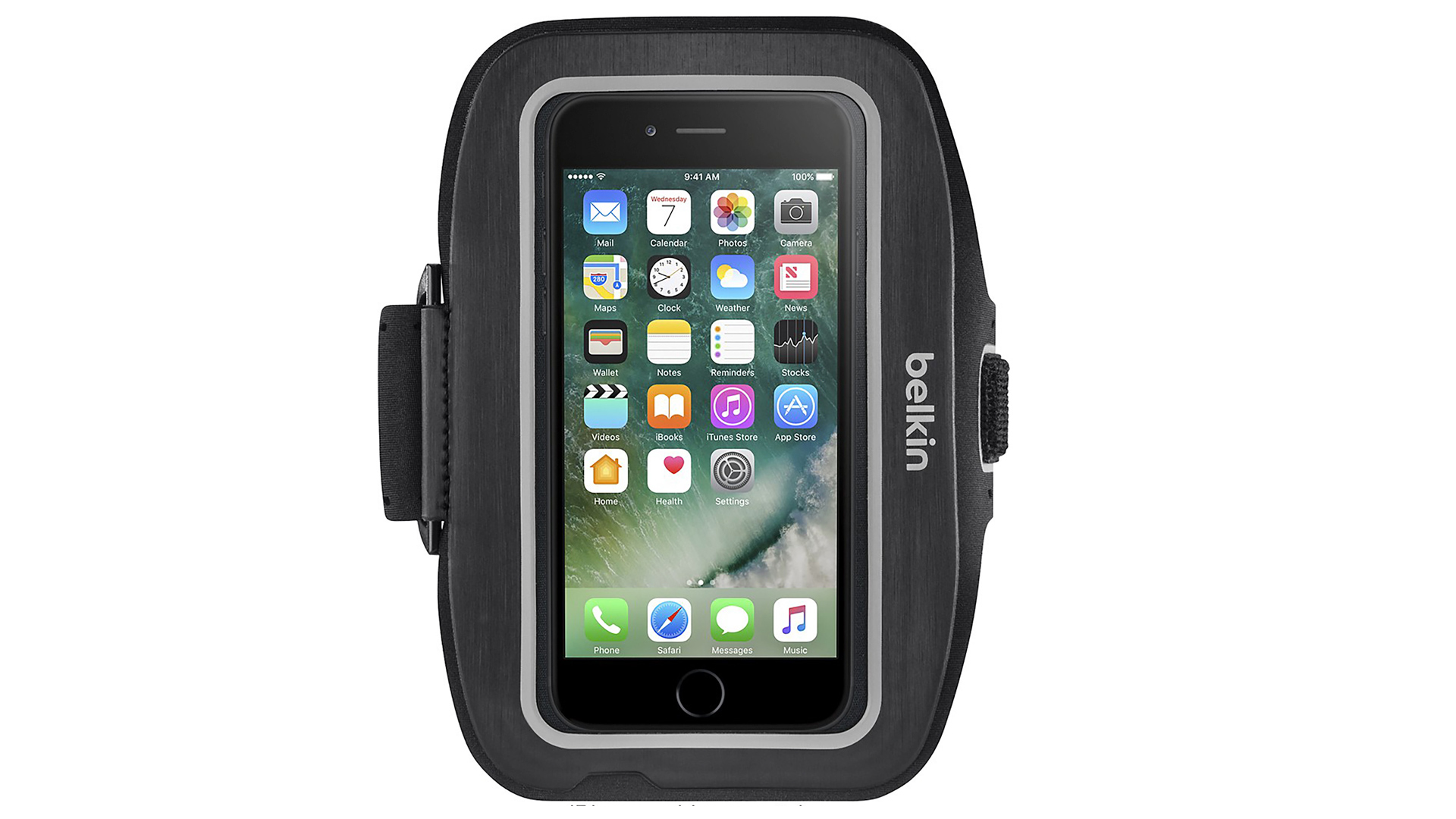 Here’s an iPhone 7 case for a particular niche: the runner. It’s a neoprene armband case that lets you take your phone out for a jog without a) holding the thing or b) having it move around in your pocket.

Unless you go on fairly long runs where taking a phone is a good idea anyway, the best reason to get a Sport-Fit is to use your phone as a GPS tracking tool, using an app like RunKeeper.

The combination effectively turns your phone into the equivalent of a fully featured GPS sport watch. The case can also hold a debit/credit card, meaning you only need to find somewhere to stash your keys. And earrings, perhaps? 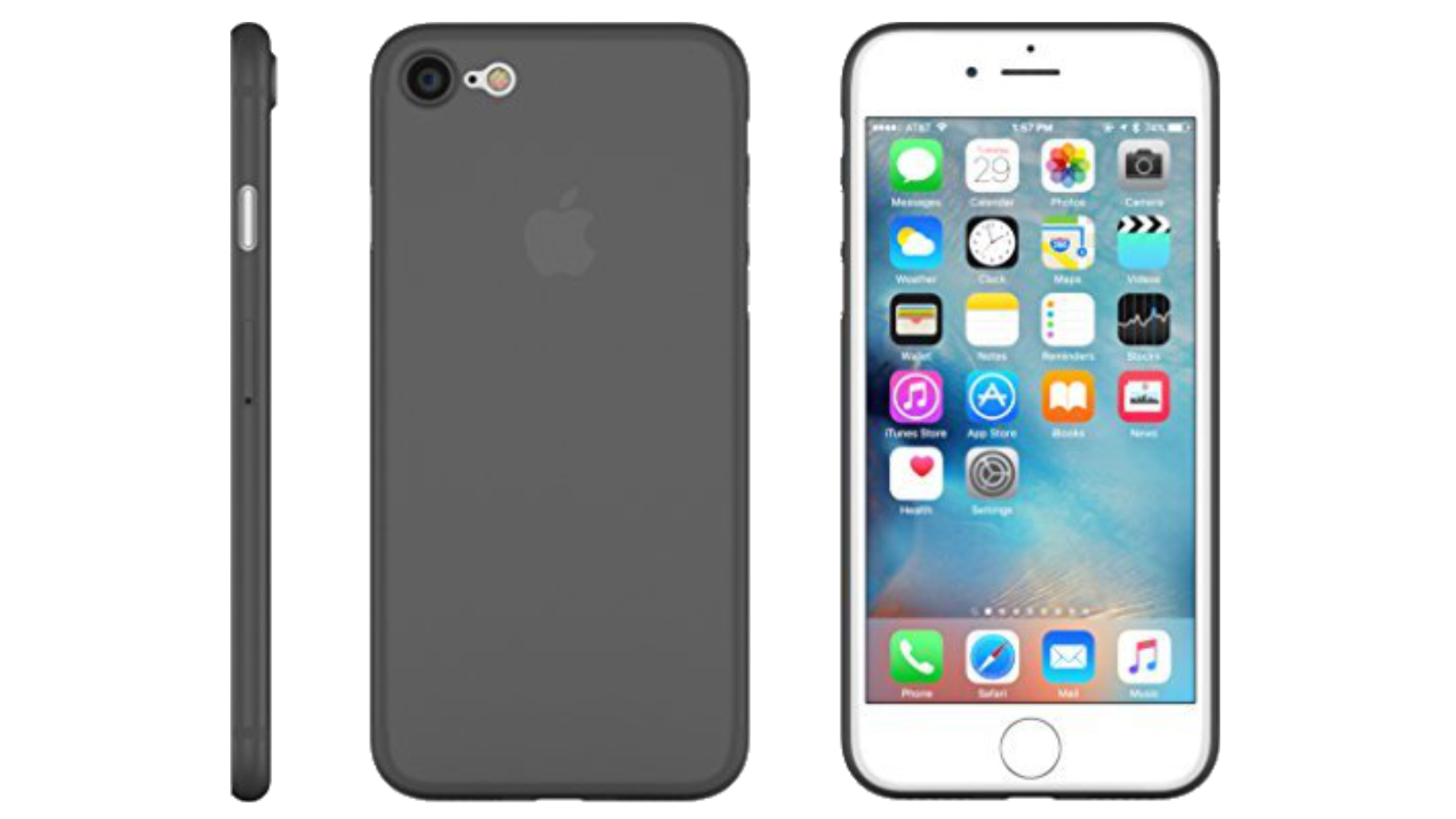 If you’re looking for a case, but don’t want to add any heft or thickness to the iPhone 7, this is the one you’re after.

MNML makes, you guessed it, cases with minimal aesthetic. They are cheap and come in a variety of colors. Better yet, they’ll work on an iPhone 8 as well, should you have one laying around or plan to buy one. 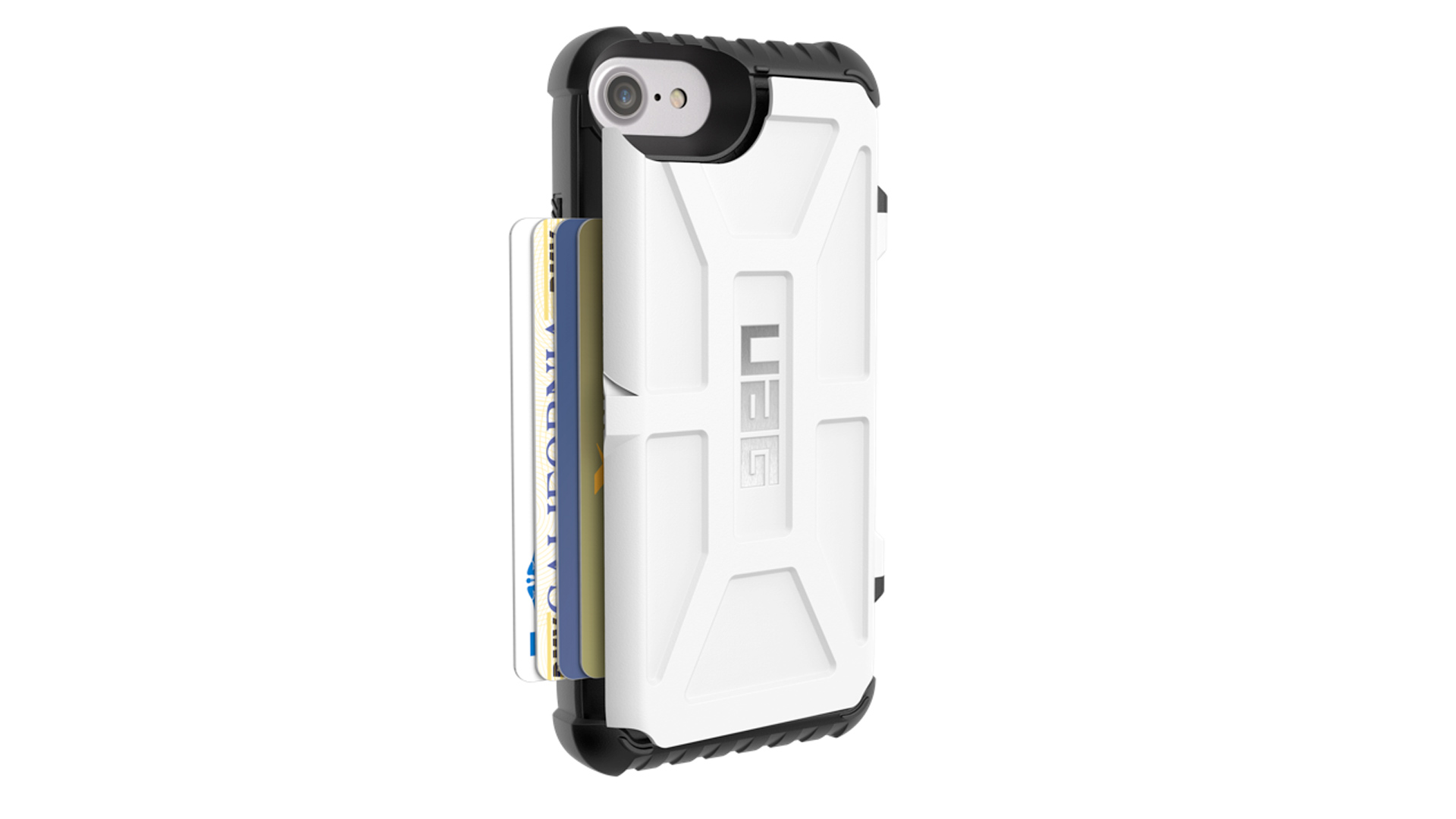 Let’s stop messing around, it’s time for a case that looks tough as nails. The UAG Trooper is a light-but-hardy case that also doubles as a wallet, as its back flips open to reveal a compartment in which you can store four cards.

It has rubbery sides and uses hard polycarbonate for that lid on the back. The Trooper adds a fair bit of bulk to the iPhone 7, but not a great deal of weight. For a higher-end feel, the Monarch-series UAG cases use bonus metal and leather, although there’s no card slot. 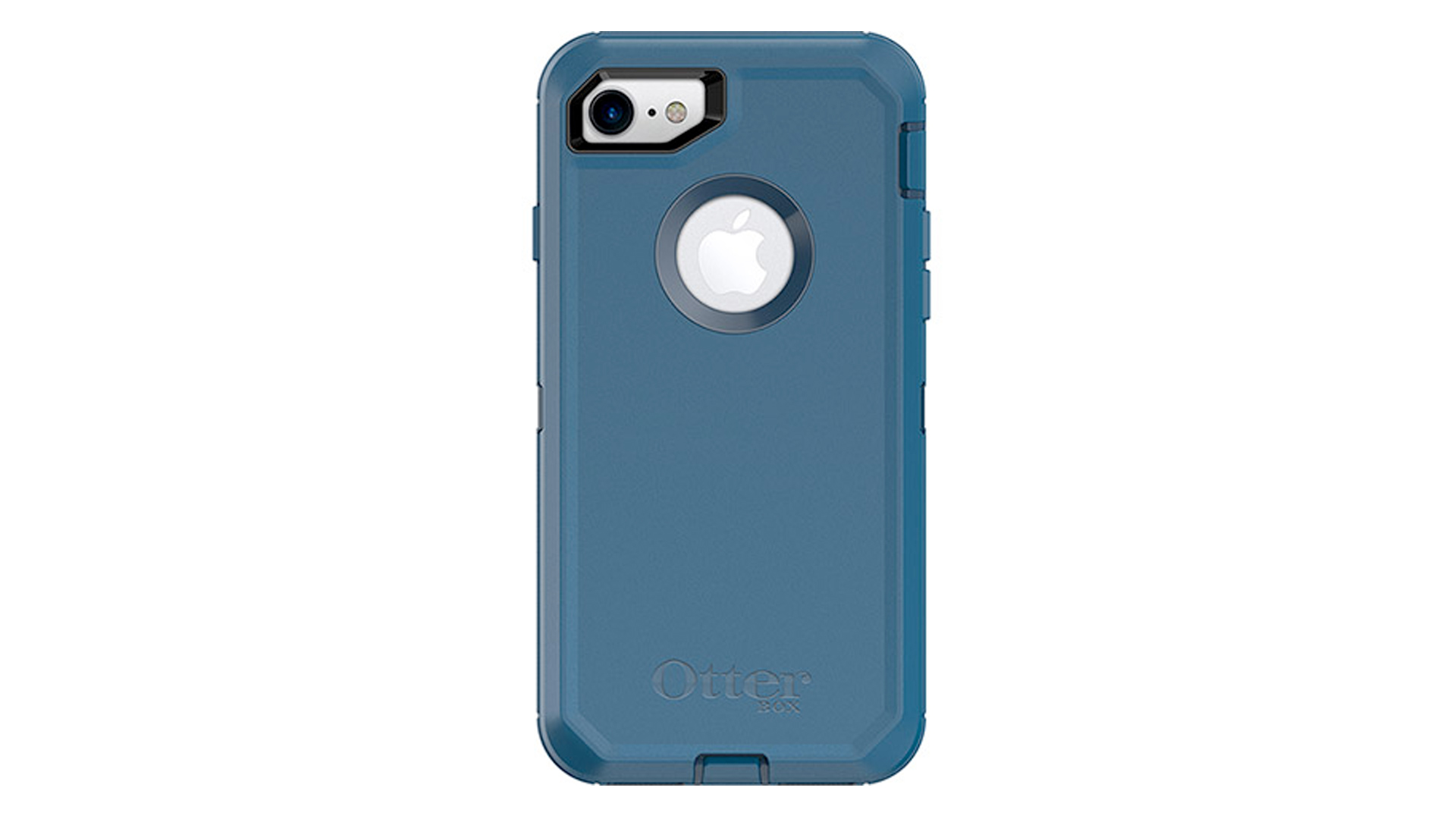 We’ve been using OtterBox Defender cases on and off for years now: they’re veterans of the scene. While they add bulk to your phone, their aim is to offer complete protection that’ll leave your handset looking fresh 12 months down the line, and for a reasonable price too.

They use a rubber inner cover, a hard plastic outer and an inbuilt screen protector, only leaving the Apple logo and camera on the back somewhat exposed to the elements.

While the iPhone 7 is already waterproof, there are port protectors too. These will stop any muck clogging up your ports, perfect if you really do treat your phone a bit rough. 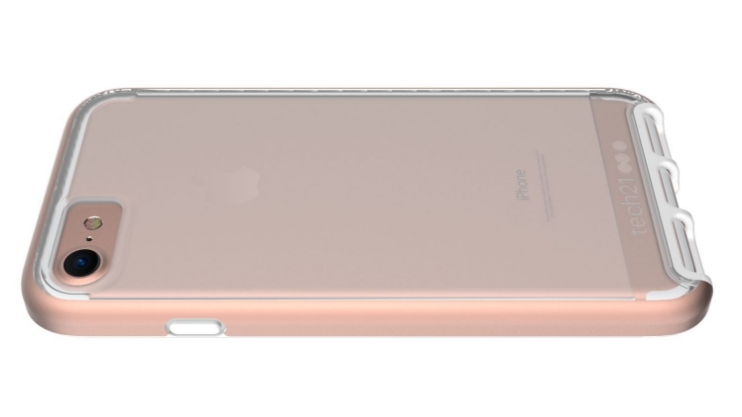 Back in the old days, Tech21 cases used to have orange blobs peppered throughout, as a way to show off the fancy shock-absorbing material the company uses.

The Tech21 Evo Elite, though, is a case that color-matches the classic iPhone shades on its sides, with a transparent back to retain as much of that iPhone flavor as possible.

Inside there’s still some of Tech21’s magic FlexShock material, which is what absorbs the force of impact to stop your phone from getting damaged. 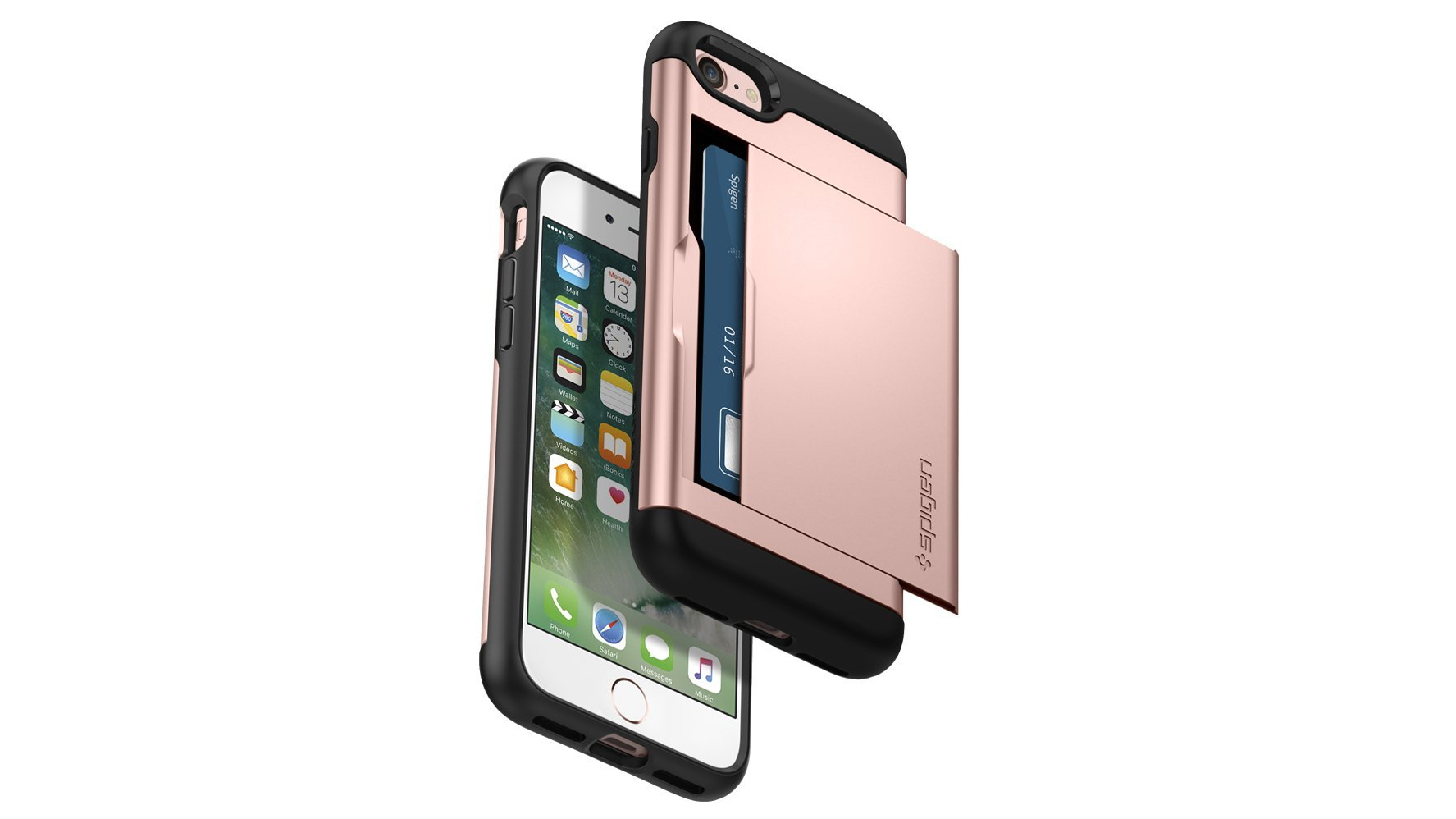 Spigen’s Slim Armor CS case for the iPhone 7 is a popular one, and the numerous color options for the hard shell can help it match the color of your iPhone.

It features a soft and hard shell for extra protection for your phone. And, a hidden credit card case will let you carry up to two cards in case you don’t like dragging your wallet or purse everywhere. 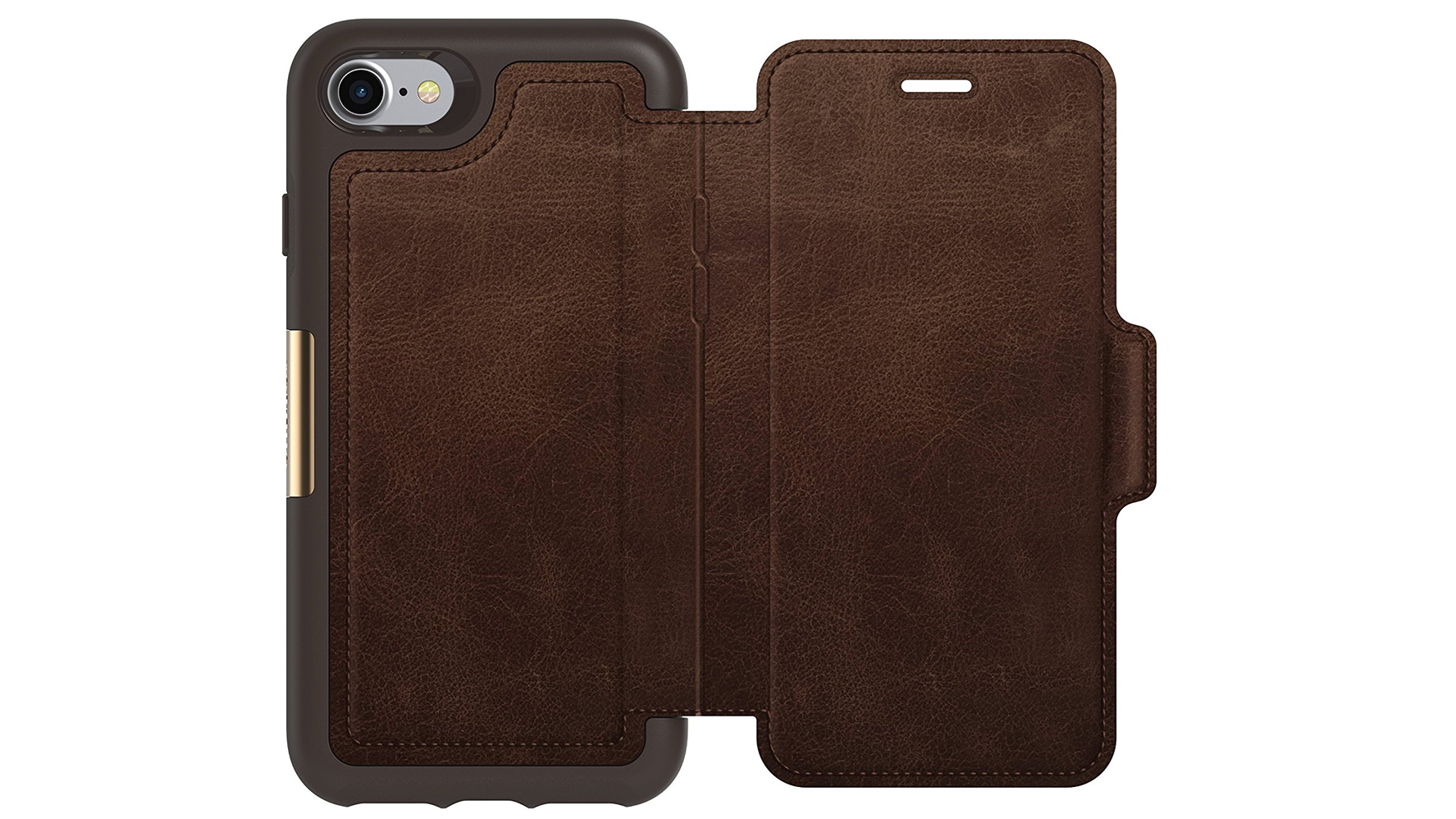 If you want a case that doesn’t sacrifice the premium look of your iPhone 7, then the Otterbox Strada case is a good pick. It combines Otterbox’s multi-later protection into a folio-style case with a leather exterior.

The case can hold a credit card, and thanks to the folio design, the screen of your iPhone 7 will get extra protection from falls.

See the Otterbox Stada for iPhone 7 at Amazon here. 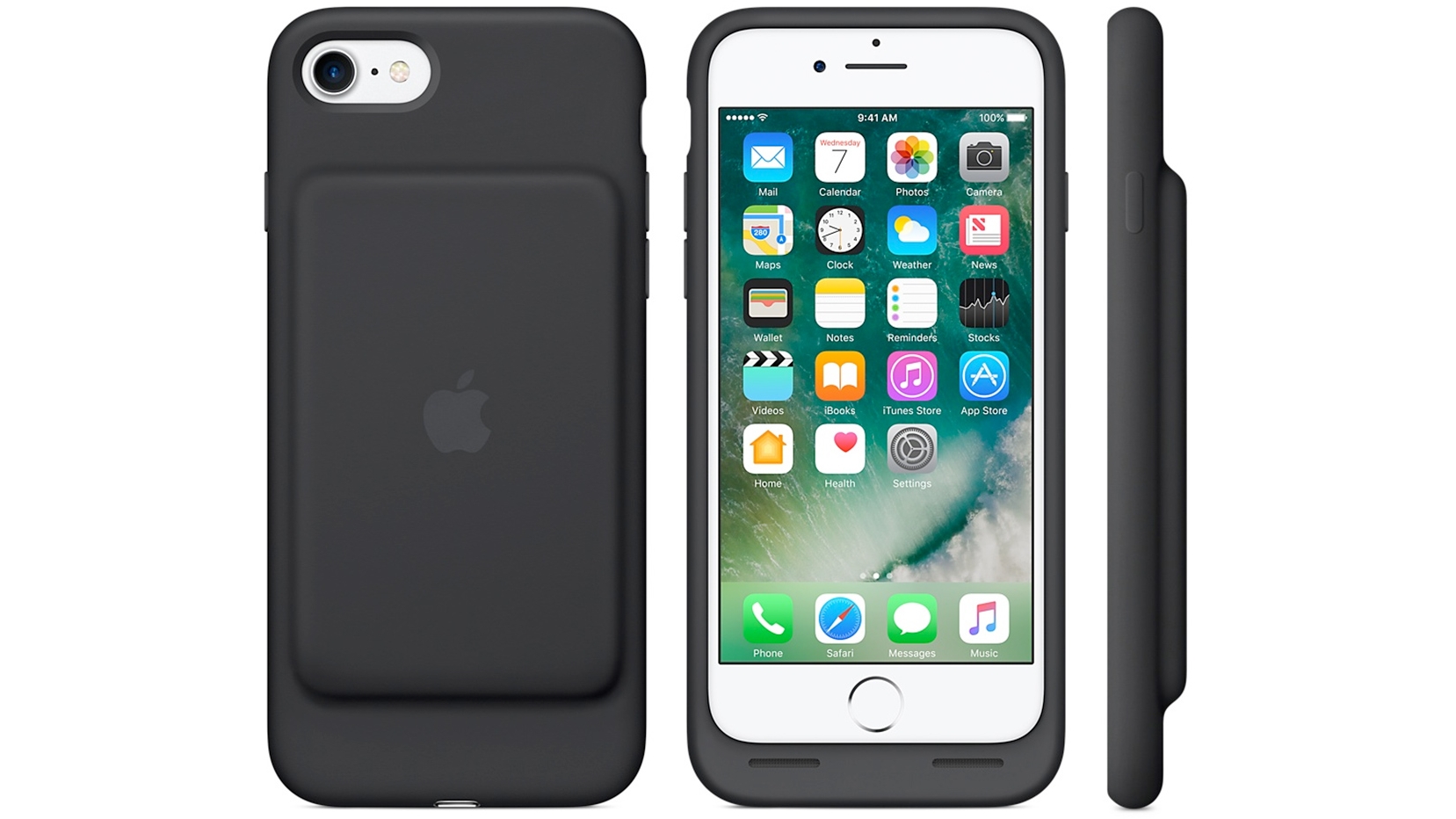 One of just a couple of problems with the iPhone 7 is that its battery life isn’t great. If you don’t fancy carrying around an external battery pack 24/7, this case can help.

It’s an official Apple accessory that shoehorns a 2,365mAh battery into a smooth silicone case, roughly doubling the iPhone 7’s stamina in real terms. The downside is that it gives your iPhone a humpback, the battery unit sticking out from the casing. There’s also a ‘lip’ at the bottom that further spoils the phone’s lines.

Battery cases aren’t for everyone, but this one is smarter than most, with clever management of when the phone is powered by its own battery and that of the case.