Update: Google has officially released the first Android Q beta for developers, but only for Pixel phones (as in, all generations of Pixel phones); enroll in the beta program here.

Google’s Android Q release date and features are what we’re focusing on in 2019, even though the last update, Android 9 Pie, is still taking its time rolling out to smartphones after its launch last August.

The upcoming version of the mobile operating system will also probably be known as Android 10, which would be the next major numerical milestone for Google to jump to. But after the first Android Q beta was officially released in mid-March, we at least settled on its official name.

When will Android Q’s full version come out for consumers? Which features are coming? What phones will support the next Android version?

Google hasn’t announced when Android Q will come out, and now that its first beta version has been released, we can put to rest outlandish theories that it wouldn’t follow up Android P with the logical next letter.

Like Android 9 Pie before it, Google officially announced Android Q in March, and released a beta build for developers on the same day. The full Android Q release may happen in early August if they follow precedent.

As to when the typical consumer will get Android Q on their smartphone, well…that requires a bit more divination.

Google will likely launch Android 10 in mid-August 2019, but going by historical OS update timings, it’ll probably only be available on Google Pixel phones to start.

The roll out to other Android phones will happen throughout 2019 and even into 2020 as various manufacturers add their own features and interfaces to the operating system. There’s a chance you’ll have to wait months after the initial Android Q release before you see the OS update on your device.

That long rollout isn’t guaranteed, though: Google’s Project Treble has been working to make it easier for phonemakers to update to the latest version of Android (and do it faster). Part of that progress has lead Treble to invite more manufacturers to participate in the Android Q beta, one of the project’s team leads revealed on a podcast.

With the public reveal of the first Android Q developer beta, Google officially confirmed a chunk of features coming in the full update. It’s unclear if they’re all available in the first release or which will be added in a later beta, but at least we know some of what’s coming.

Of course, Google is keeping some of the fun new features close to the chest. Some of the more newsworthy ones will probably be revealed at Google IO 2019, while others will be unveiled with further beta versions. However, we may have a heads-up on which features to expect from Google’s mobile operating update thanks to leaks.

But first, here are features that Google confirmed in its Android Developers Blog post. 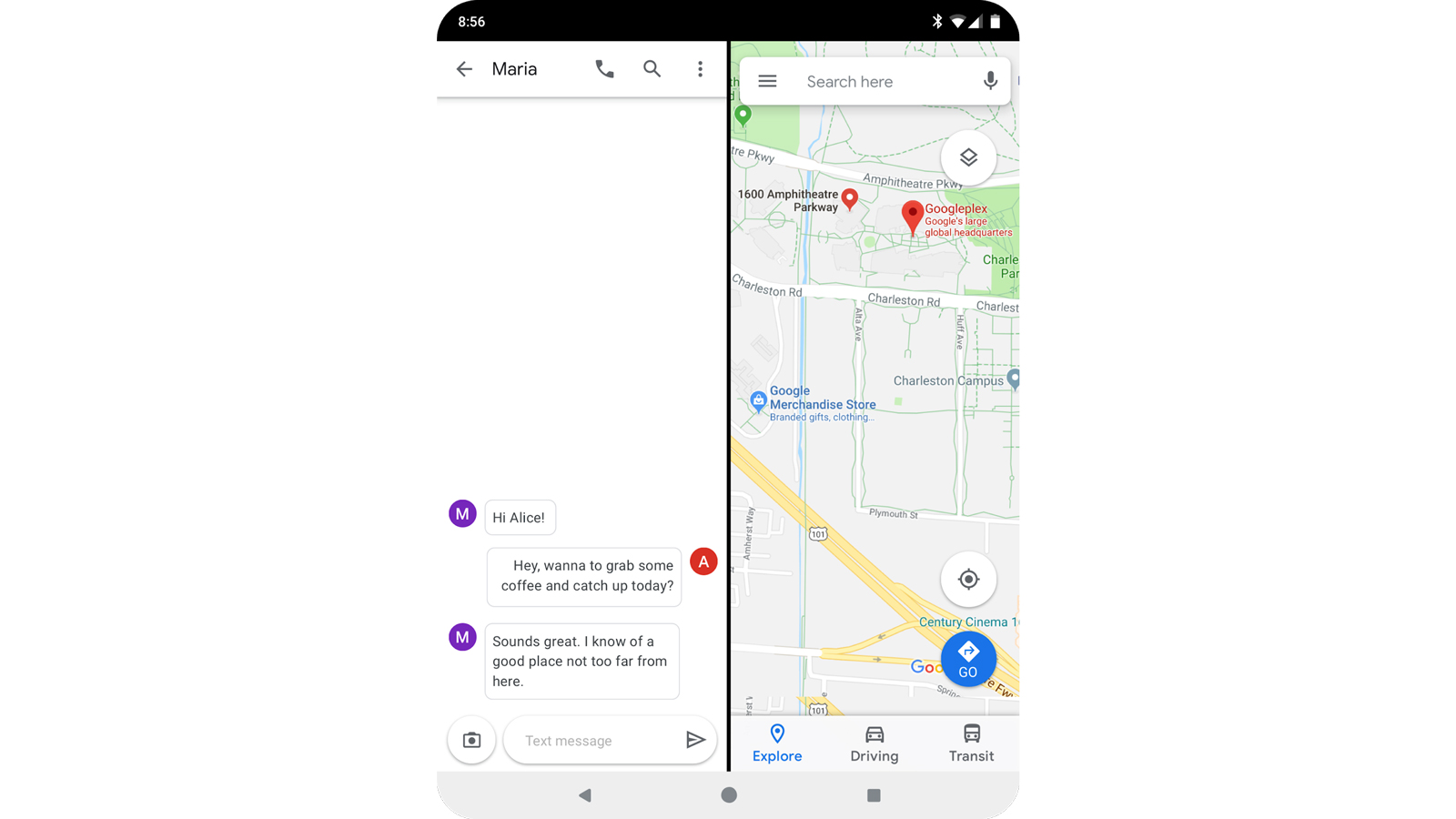 The big feature for 2019 is support for “foldables and innovative new screens,” as the Android Developers Blog post put it. This is more a feature for developers, with back-end changes that will help make their apps ready for the big, folding screens of the top-tier phones. But at least we know Google’s making sure Android is ready for them.

Android Q’s first big leak was by the site XDA Developers, which allegedly got a hold of a January 2019 build of the new OS and showed off what might be coming – including an all-system dark mode, which tech expert Owen Williams confirmed was in the first developer beta.

Supposedly, you’ll be able to toggle it on in Display Settings, and in the main interface, Settings and Files will turn a dark gray. Other parts like the Volume panel, Quick Settings and Notifications turn black to show up against the darker background.

Developers will also get an option that seems to force apps without dark modes to switch to the nighttime-friendly color scheme.

Users will have more control over app access to location info, shared files and repositories like Photos and Videos. Another helpful change: instead of apps automatically switching focus when they have an Activity in the background (like an alarm or call), appmakers and opt to send high-priority notifications first.

These might be some of the most onerous changes for developers in Android Q, which is why, as the Android Developers Blog post reads: “We are bringing these changes to you early, so you can have as much time as possible to prepare.”

Developers will be able to show contextually-important system settings within their apps, which harnesses the ‘Slices’ feature that came in Android 9 Pie. So instead of having to navigate to Settings to switch on Airplane Mode or toggle Wi-Fi or Mobile Data on/off, say, you’ll be able to do that right within your mobile browser.

There are also tweaks to connectivity, including ‘adaptive Wi-Fi’ that enables high performance/low latency modes, which would be useful for things like online gaming or voice calls.

Like all the depth and blur in Pixel camera software? In Android Q, apps can request depth data (JPEG + XMP metadata + depth and confidence map) to, say, offer “specialized blurs and bokeh options in your app,” as the Android post suggests. “You can even use the data to create 3D images or support AR photography use-cases in the future.”

As for gaming, the Android Q beta enhances support for OpenGL along with bug fixes and more functionality. 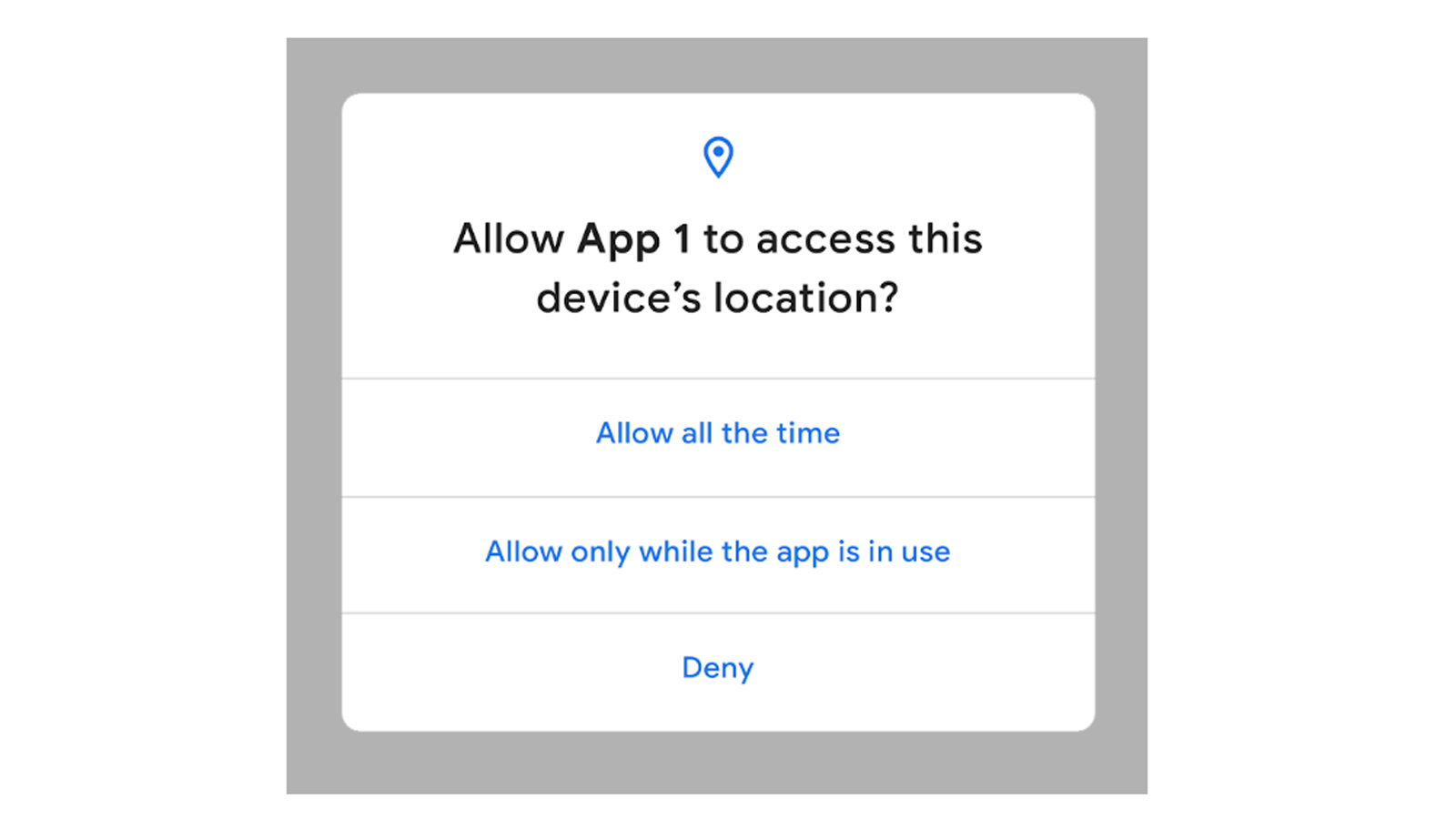 XDA’s leak also revealed a revamp of permissions, from the general to specific.

Users can look at a broad overview of which apps they’ve given permission for certain things – like, say, location or microphone access. There’s a search function that lets you filter by permission item, allowing you to quickly see which apps you’ve given access to your camera, contacts, location and so on.

You can also look at permissions each app has been granted and toggle them individually to set whether access is off, on, or only on while the app is open. 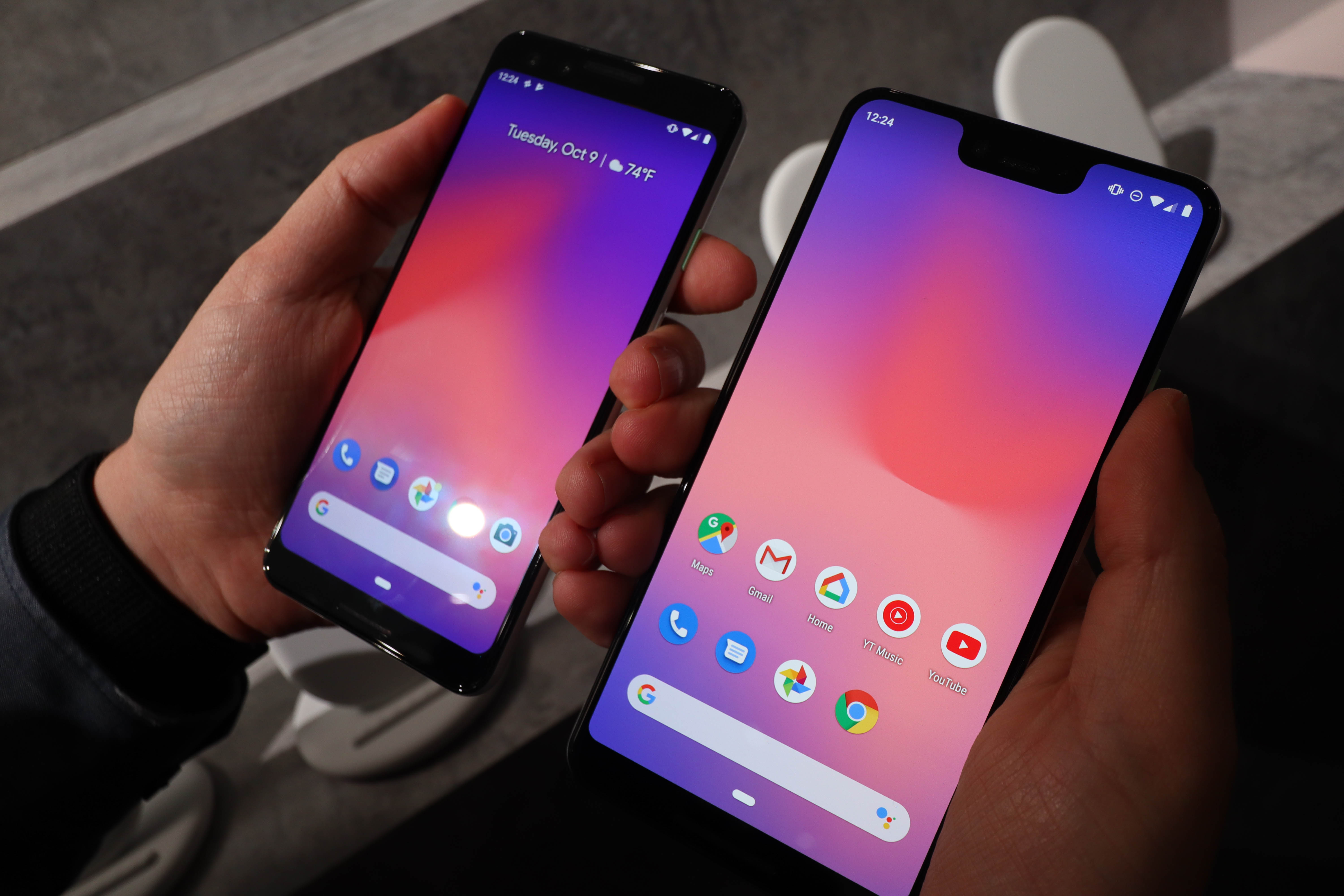 There are plenty of new developer tools described by the XDA leak, but it’s not clear how all of them will function.

Freeform windows return, which lets you enable them after pressing and holding an app icon in the recent apps overview. On the other hand, XDA also found a feature called “Game Updates Package Preference” whose purpose is a bit of a mystery. Another, titled “force desktop mode,” seems like it would push Android to an external display, Samsung DeX-style.

Not all of the UI is finished, either, making some features – like screen recording – not totally comprehensible.

Another dive into the developer build XDA Developers acquired revealed the OS might get a feature iOS users have bragged about for awhile: Face ID. The next version of Android might support phones packing the hardware to use facial scans for authentication.

It’s unclear just how it will work, or if it would combine sensor readings for a comprehensive scan of facial features. But we did get hints via error codes in one of the OS’ APK, which variably tell the user to move the phone in different directions for the device to get a better look at their face.

Other strings of code found by XDA are also promising, like one that blatantly informs users they can “Use your face to unlock your phone, authorize purchases, or sign in to apps.”

Whether phones will be able to use Face ID is another story: they need to have the hardware installed – whether that’s sensors or the right specs – for the feature to work. 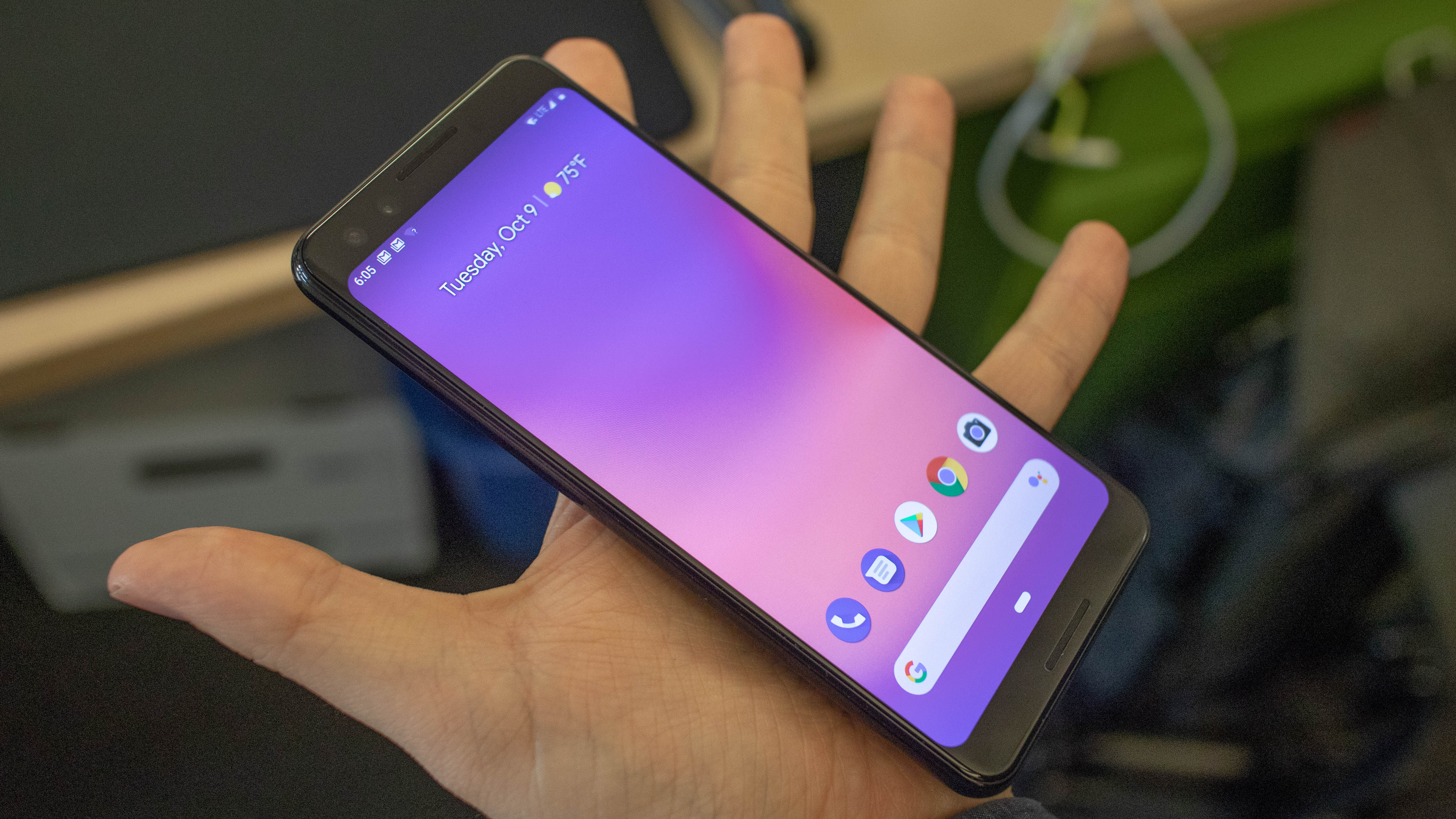 Goodbye back button, hello (only to) gesture controls

While recent Android phones from different brands have tried to push their own gesture controls for years, the OS has always kept its static three-button navigation as an option. Those days might be at an end as that XDA preview build showed only gesture controls, per Tom’s Guide.

From the looks of it, users may only be able to use the navigation system present in the Google Pixel 3: a small pill at the bottom of the screen that you can swipe in the cardinal directions to get around.

It’s key to note that Android allows brands to develop their own navigation methods and systems to go along with their overlays, so it’s very unlikely that this will be the only way to navigate. This build is also a bit out of date, so who knows if something as integral as OS movement would be finalized that far out.

There were a couple other additional Android 10 odds and ends from that XDA leak, including a pair of new accessibility settings.

Both apply to how long notification messages stay up, and seemingly apply to different kinds of notifications. The first are for “messages that ask you to take action,” while the other apparently refers to notifications that pop up with simple reminders. You can toggle these to stay up between 30 seconds and 2 minutes.

That’s all we’ve seen for now, but new details will surely come up in the coming beta versions, at Google IO 2019 in May and from any leaks in between.